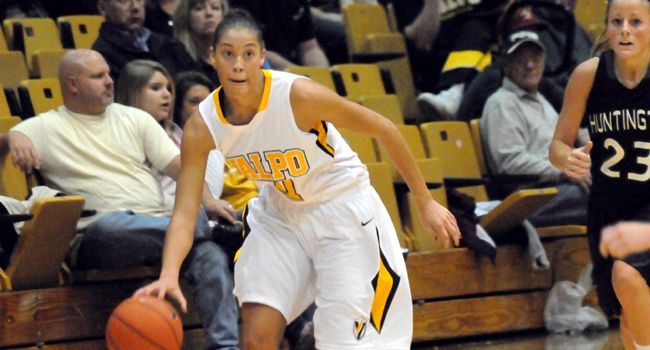 Upcoming in Crusader Basketball: After picking up their first victory of the season on Wednesday evening, the Valparaiso Crusaders return to the hardwood on Saturday afternoon looking to continue the momentum.  The Brown and Gold will host Lehigh at 12:05 p.m. CST in the second contest of a three-game homestand.

Head Coach Keith Freeman: In his 18th season on the Valparaiso bench, Keith Freeman has a 277-231 (.545) record at the helm of the Brown and Gold.  In his 23rd season overall, Freeman has a 406-278 (.594) career mark.  He is Valpo’s all-time winningest coach and has amassed more than half of the victories in the program’s history.

Wrapping Up Indiana-Northwest: Valparaiso scored the game’s first eight points and jumped out to a 24-point halftime advantage on the way to an 80-47 victory over the Redhawks on Wednesday evening at the ARC.  Tabitha Gerardot and Mallory Ladd both tallied double-doubles for the Crusaders as four players scored in double figures.  Gerardot posted 19 points and 10 boards while Ladd had 13 points and 10 rebounds.  Shaquira Scott added 14 points for the Brown and Gold while Ashley Varner also pulled down 10 rebounds as the Crusaders outrebounded Indiana-Northwest 53-34.  Valpo shot 44.8% from the floor as a team.

Scouting Lehigh: The Mountain Hawks dropped a 62-54 overtime contest on Wednesday afternoon at home against Villanova.  Alexa Williams is averaging nearly a double-double, scoring 11.5 points and grabbing 9.8 rebounds per game this season.  Sarah Pearce, the team’s leading shooter from the floor at 47.2%, adds 9.4 points per contest.  As a team Lehigh is averaging 54.5 points per night and shooting 30.8% from the floor.  The team shot a season-high 39.3% from the floor  against the Wildcats on Wednesday.  The Mountain Hawks are 1-5 away from home on the year and will return back home for six straight contests following their trip to Valpo.

Double the Trouble: Tabitha Gerardot and Mallory Ladd both registered double-doubles for the Brown and Gold on Wednesday evening against Indiana-Northwest.  Gerardot scored a season-high 19 points and added 10 rebounds for her second straight double-double and 11th of her career.  Ladd added her first collegiate double-double with 13 points and 10 boards, the last of which came in the game’s final minute.  The duo share the team’s scoring lead averaging 10.5 points per game with Ladd pulling down 7.8 rebounds per game while Gerardot adding 6.7 boards per contest.

Making Shots: Tabitha Gerardot leads the Crusaders shooting 51.1% from the floor, a mark that ranks seventh in the Horizon League.  The sophomore forward made 7-of-10 shots from the floor on Wednesday against Indiana-Northwest and is 18-for-30 (60%) from the field over the last four games.

Freshman Dish the Rock: Mallory Ladd and Jessica Carr both showcased their passing skills in the victory over the Redhawks on Wednesday night.  Both freshmen handed out career highs with six assists each to lead Valpo.

Carr Has All-Around Success: In addition to handing out the six assists, Jessica Carr filled the stat sheet in several other categories on Wednesday night.  The rookie scored seven points and handed out four steals, both season highs, while making 2-of-3 attempts from three-point range.

More Freshman Contributions: Shaquira Scott added 14 points for the Brown and Gold against Indiana-Northwest as Valpo’s three freshmen accounted for 34 points (42.5%) in the contest.  She also pulled down a career-high seven rebounds and added two assists and a steal.

Swatting Them Away: At just 5-9, Laura Richards came up large on Wednesday, blocking a pair of shots for her multi-rejection game of her career.  Richards had just seven total blocks during the first two seasons of her career.

Making Free Throws: Mallory Ladd entered the week ranked 64th in the country shooting 88.2% (15-of-17) from the charity stripe this season.  She improved that percentage on Wednesday evening making 6-of-6 from the line against Indiana-Northwest.  Ladd is now shooting a team-best 91.3% from the line, fifth in the conference.

Crashing the Boards: Valparaiso pulled down 53 rebounds, including 22 on the offensive end, against Indiana-Northwest.  The Crusaders lead the Horizon League with a +7.3 rebounding margin on the season and are tied for second grabbing 14.7 offensive boards per night.  Individually, Ashley Varner leads the way with 8.7 rebounds per game, grabbing seven or more in every contest this year.

Who’s in the Lineup Tonight?: Due to injuries and illnesses this season, only five Crusaders have appeared in all six games thus far this season.  Gina Lange, Tabitha Gerardot, and Ashley Varner have started each contest, while Mallory Ladd and Shaquira Scott each have seen the floor in all five games as well.

Gerardot Earned Postseason Honors Last Year: Tabitha Gerardot was named to the Horizon League’s All-Newcomer Team as a rookie last season.  Gerardot had nine double-doubles as a freshman and averaged 10.7 points per game.  Her 7.4 rebounds per contest led the Crusaders.

Adams Named Preseason Second Team: Betsy Adams was named to the All-Horizon League Preseason Second Team  in voting done by the league’s head coaches, media members, and sports information directors.  Adams led Valpo in scoring with 12.6 points per game last season and finished fourth in the conference making 2.2 triples per contest.  She was ninth in the Horizon League making 34.9% from three-point range on the year.

Crusaders Have Co-Captains: Head coach Keith Freeman has announced that the Crusaders have co-captains for the 2011-2012 season.  Serving in that role are fifth-year senior Ashley Varner along with senior Betsy Adams.

This and That: Tabitha Gerardot tied a career-high for the second straight game with three assists against Indiana-Northwest ... the Crusaders made a season-high six three-pointers against the Redhawks ... 80 points scored were the most by Valpo since an 88-77 win at UIC on March 6, 2010 ... the 33-point win was the largest margin of victory for the Crusaders since downing Youngstown State 80-28 on Feb. 13, 2010.