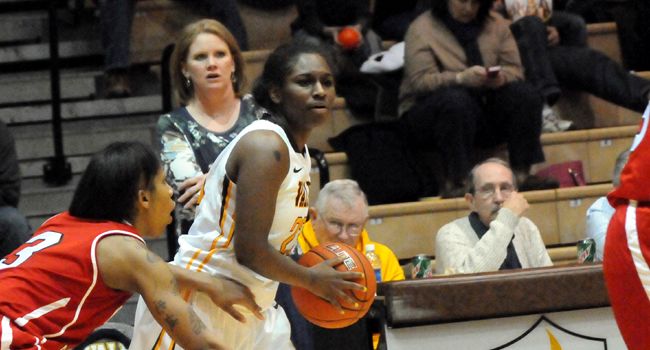 The Crusaders are now 2-0 on their current four-game home stand and are 4-1 at the Athletics-Recreation Center this season.

“We’re finding ways to win,” Crusader coach Tracey Dorow said. “That tells you a lot about the grittiness of this team and just the feistiness, the battle that they have.”

“She’s impossible to guard when she starts putting the ball in the hole from outside,” Dorow said of Richardson.

Valparaiso, which led by as many as 11 in the first half, saw its lead cut to a single point three different times, including at 50-49 with 1:56 to play. The Crusaders followed with an empty possession. The Huskies missed a shot with 45 seconds left and got an offensive rebound, but sophomore Shaquira Scott (Wilmette, Ill./Loyola Academy) came away with a steal and senior Laura Richards (Connersville, Ind./Connersville) was fouled.

Richards made the front end of a one-and-one, and after a Northern Illinois timeout, she made the second one to put the Crusaders up 52-49 with 27 seconds left.

Satvia Taylor missed a tying 3-point attempt for Northern Illinois in the closing seconds, and Richardson grabbed the rebound and was fouled. Her two free throws were the final points of the game.

Richardson shot 5-of-12 from the field for Valparaiso, including 2-of-3 from behind the arc and 4-of-4 at the free throw line.

The Crusaders, who scored on their opening possession and never trailed, built a 23-12 lead at the 8:38 mark of the first half on the strength of a 7-0 run. Richards, Gerardot and junior Liz Horton (Cannelburg, Ind./Cannelburg) scored baskets during the spurt.

“We came out as the aggressor at the very beginning of the game,” Dorow said. “We really took it at them as much as possible. We attacked the paint. I thought we executed our offense well.”

Northern Illinois cut into the lead over the remainder of the half, and Valparaiso led 31-26 at halftime.

Nine of the 11 Crusaders who saw action made at least one field goal.

Valparaiso (5-8) returns to action on Saturday, when the Crusaders host Youngstown State at 1:35 p.m. to open Horizon League play. The game will be broadcast on WVUR, 95.1 FM, Valparaiso, and online at www.valpoathletics.com, which will also have a link for live stats.