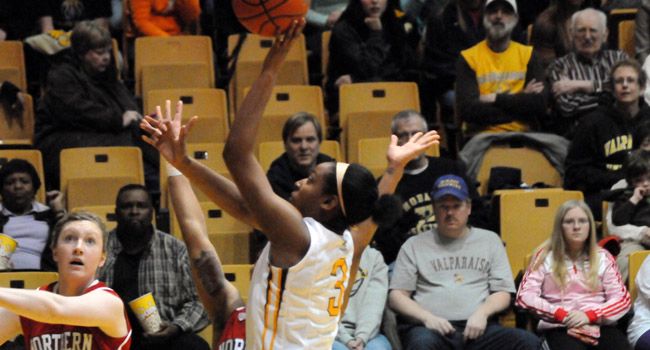 Valparaiso trimmed a 19-point second half deficit against Milwaukee down to two with 7.0 seconds to go, but the Panthers held on for a 75-71 win at the ARC on Thursday evening.

Milwaukee drained 12 3-pointers in the game, including five from Emily Decorah.

“That’s not the kind of defense we want to play,” Crusader coach Tracey Dorow said. “We need to do a better job. Give Milwaukee a lot of credit. They took it to us, especially that first 20 minutes.”

Sophomore Jessica Carr (Arcadia, Ind./Hamilton Heights) started the spurt with 3-pointer, and after a Milwaukee miss, senior Laura Richards (Connersville, Ind./Connersville) followed with a jumper to cut the deficit to eight.

Milwaukee missed a pair of free throws and freshman Jessi Wiedemann (Palatine, Ill./Fremd) made a jumper to cut the lead to six. The Panthers got to free throws from Sami Tucker, but the Crusaders answered back with a layup from sophomore Shaquira Scott (Wilmette, Ill./Loyola Academy).

After Milwaukee split a pair of free throws, Scott made a basket and was fouled. She missed the free throw, but Richards tracked down the offensive rebound and drilled a 3-pointer to trim the lead to two with nine seconds to go.

“We did a really good job being much more active,” Dorow said of the late spurt. “We played with a sense of urgency. We did a good job pressing. We got hands on a lot of balls. We did exactly what we wanted to do.”

Angela Rodriguez made two free throws for the Panthers to close out the scoring.

A layup from Wiedemann tied the game at 27 at the 5:47 mark of the first half, but the Panthers finished the half on a 17-3 run to lead 44-30 at the break. Ashley Green scored six points on the run. Six different Panthers contributed to the spurt.

“They were the aggressors,” Dorow said of Milwaukee. “They attacked. They made shots early and they played with confidence. They played like they were on a mission.”

Milwaukee led by 19 five minutes into the second half. The Crusaders slowly chipped away to within nine at 56-47 with 5:34 left. Decorah answered for the Panthers with 3-pointers on back-to-back possession to bump up the lead back to 15.

Decorah and Angela Rodriguez led Milwaukee (7-16, 3-8 HL) with 15 points apiece. Green scored 11 points, and Tucker added 10 points and eight rebounds. The Panthers finished 12-of-30 from behind the arc.

Valparaiso (9-15, 4-7) returns to the court on Saturday, Feb. 23, when the Crusaders pay a visit to league-leading Green Bay. The game begins at 2 p.m. and can be heard live on WVUR-FM 95.1. A link for live audio, video from the Horizon League Network and stats will be available on www.valpoathletics.com.