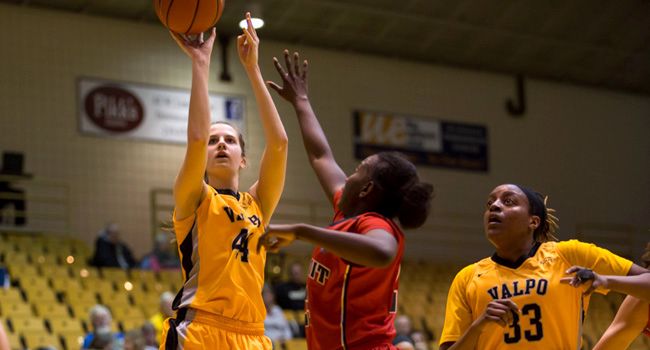 The Crusaders didn't let Angela Rodriguez beat them Saturday. But Avyanna Young did.

Milwaukee received a career day from her as the Panthers took an 85-80 win Saturday at the Klotsche Center.

Rodriguez entered Saturday's contest as the fifth highest scorer in the Horizon League. She matched her season average with 17 points, but Young's play down low was the difference. Young shot an impressive 15-of-19 from the floor en route to a Horizon League watermark 36 points. The sophomore added 10 rebounds for her eighth double-double of the season.

The Panthers kicked the game off with an 11-0 run. Jessica Carr's (Arcadia, Ind./Hamilton Heights) first of three first-half triples ended the surge a little less than four minutes into the game. Carr finished with 11 points.

The Crusaders were whistled for fouls early and often as UWM found itself in the bonus ahead of the midway point of the first half. Young helped the Panthers with 20 first-half points. She converted eight of her ten field goal attempts in the opening stanza.

Milwaukee made good on five of its first six shot attempts to open the second half. Valpo cut it to a one-possession game with 12:45 remaining as Dean knocked down a jumper to make it 54-51.

The Brown and Gold tied the game on three different occasions, but were unable to ever seize a lead. The Panthers assembled a double-digit lead at the five-minute mark while the Crusaders were in the midst of a near six-minute field goal drought. A Horton two-pointer with 3:53 remaining was the first shot the Crusaders made since a Wiedemann layup with 9:40 on the clock.

Valpo trimmed the deficit to four points a couple times in the waning minutes, but the Panthers nailed their free throws down the stretch.

"I thought we did a good job offensively. We dug ourselves a hole early, but did a nice job getting out of it," head coach Tracey Dorow said.

The Crusaders (3-17, 1-6 Horizon) march on to Green Bay to battle the defending Horizon League champion Phoenix (11-7, 4-2 Horizon) Monday evening at 7 pm. Links to the audio, video, and live stats are available at valpoathletics.com.