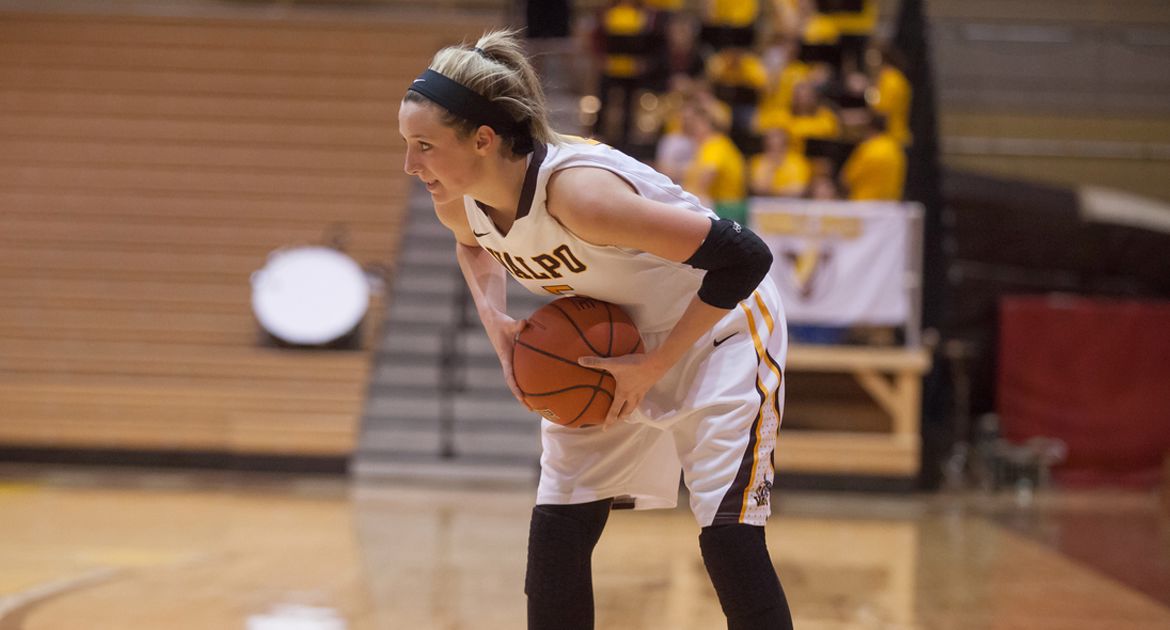 The Valparaiso women's basketball team begins its season with an exhibition tilt versus the Wisconsin-Parkside Rangers on Saturday afternoon. Fans will get their first glimpse of the 2014-15 team at the ARC in a 1:35 pm tip. The regular season opens on Friday, November 14th when Butler comes to town in a 5:00 pm tip-off. With the season right around the corner, we run down this year's team, the schedule, and what to expect from the rest of the Horizon League.

A Review of the Roster

Seven players received more than a dozen starts a year ago for head coach Tracey Dorow. Five of those seven are back and the NCAA-sanctioned timeout is up on transfers Annemarie Hamlet (McBain, Mich./McBain [Oakland]) and Haylee Thompson (Hailey, Idaho/Wood River [Utah State]).

Both Hamlet and Thompson project prominently into Dorow's plans for this year's edition of the Crusaders.

At 6'1'', Thompson provides solid size, mobility, and competitiveness to complement Sharon Karungi (Kampala, Uganda/Northern Oklahoma College) in the post. As Thompson becomes more acquainted with the intricacies of Dorow's program, she'll become even more effective. Thompson has been limited for much of October with a back injury. Hamlet is best suited as a two guard, but she will spell relief to Jessica Carr (Arcadia, Ind./Hamilton Heights) and Lexi Miller (Caledonia, Mich./Caledonia) at the point. Hamlet has been recognized as one of the hardest workers on the squad and is touted as a pure shooter by Dorow. It's been two years since she's played in a college game, and she's anxious to return to the court.

Carr's 2013-14 got off to a late start as she missed the first ten games of the season recovering from a hand injury sustained in an automobile accident. The senior point guard played her best basketball in a Crusader uniform over the final month of last season. From February 22nd to March 12th, Carr averaged 12.6 points and 4.7 assists per game all the while shooting 46.2% from beyond the arc. She'll look to carry that momentum forward into 2014-15. Lexi Miller had a stellar summer, but, like Thompson, is working through a back injury. She finished last season as one of only two Crusaders with more assists (59) than turnovers (56). Miller will be relied on not only as a ball handler, but a proficient scorer as well.

The Crusaders have high expectations for junior Abby Dean (Carmel, Ind./Carmel) this year. Dean, who led Valpo in free-throw percentage at 85.2%, anticipates to be the main contributor this year. She finished in double figures on 12 different occasions a year ago, but did so only once over the team's final ten games. Dean was the team's third-best shooter last season (45.5%) and her defense is a strength.

Freshman Jasmyn Walker (Muskegon, Mich./Mona Shores) is estimated to make an immediate impact for Valpo. Her transition from a three in high school to a four at the collegiate level has been smooth. Walker is active on the offensive boards and her versatility to play inside and out will enable her to see significant minutes as a true freshman.

Karungi is coming off the best summer of her career. She served as the centerpiece for the gold medal Uganda national team in the Zone V basketball championship in Africa. With Valparaiso last season, Karungi had eight double-doubles and, at times, proved to be a dominant force down low. She averaged 11 points and 7.4 rebounds in just 23 minutes per game. If her health cooperates, the Crusaders' post play will be one of the better in the Horizon League.

Jessi Wiedemann (Palatine, Ill./Fremd) logged just under 1,000 minutes on the court in 2013-14, and her reliability (10.4 PPG) and basketball IQ are tremendous assets for Dorow. Her playing time in the immediate future remains in question as she also deals with a back injury.

Faith Miller (Huber Heights, Ohio/Wayne) has played with a noticeable surge in confidence early on. Her speed and quickness make her valuable on both ends of the floor.

Freshman Dani Franklin (Cedar Rapids, Iowa/George Washington) is an intriguing talent. At 6'1'', Franklin projects to see time at the four, but she is a sharp shooter who can punish teams from outside as well. Her shot as well as her mobility have impressed.

Fellow freshman Anne Hamilton (Chanhassen, Minn./Minnetonka) also adds size and depth to the guard position. Like Walker, Hamilton is bold on the offensive boards. Freshman Georgi Donchetz (Savage, Minn./Burnsville) is a guard with height and scoring ability. The Minnesota native is rehabbing after tearing her ACL during her senior season of high school.

A Squint at the Schedule

The Crusaders open the 2014-15 season at the ARC versus former Horizon League-foe Butler. The Bulldogs experienced a roster overhaul this past offseason and they represent a much different team than the 2013-14 version, who defeated Valpo 65-50 last December. The Brown and Gold will also play host to Tennessee Tech and Louisville before turning the calendar to December. The Crusaders and Golden Eagles went down to the wire last year in Cookeville before Tennessee Tech escaped with an 84-78 win. Louisville, on the other hand, advanced to the Elite Eight of the NCAA Tournament before falling 76-73 to Maryland. The Cardinals ended the season ranked 4th in the Associated Press poll.

Valparaiso will entertain Tulsa and Illinois before Christmas with trips to Miami of Ohio, South Dakota, and SIU-Edwardsville sprinkled in. Tune-ups against Purdue-Calumet and Stetson await the Crusaders before Horizon League play commences on January 8th at Cleveland State. Overall, the Crusaders have two three-game homestands, but play no more than two in a row away from the ARC.

A Hearty Look at the Horizon League

Perennial powerhouse Green Bay missed the NCAA Tournament last March for just the second time in six years. Wright State unseated the Phoenix with an 88-69 defeat in the title game of the Horizon League Tournament. Green Bay, the reigning regular season champions, graduated two pieces from last year's squad but welcome four freshmen into the mix. A deep lineup coupled with head coach Kevin Borseth's system exist as a resounding strength for Green Bay. Meanwhile, the Raiders welcome back perhaps the best one-two punch in Kim Demmings and Tay'ler Mingo. Demmings, the 2013-14 Horizon League Player of the Year, can and will take over a ball game as evidenced by her 22 games of 20 or more points. Her 2013-14 scoring (22.4 PPG) and rebounding (6.1 RPG) figures were consistent with prior seasons, but Demmings did a commendable job reducing turnovers (142 in 2012-13, 89 in 2013-14). Mingo served in a reserve role her first two seasons before enjoying the biggest breakout season of anyone in the HL. After scoring a combined 85 points between her freshman and sophomore seasons, Mingo erupted to average 15.1 PPG (including a career-high 31 against Green Bay in the HL Tournament Finals) and 152 assists. Green Bay and Wright State are expected to battle again for the title come mid March.

Ruvanna Campbell (17.1 PPG, 12.8 RPG) and Terri Bender (9.1 PPG, 4.2 APG) carry plenty of experience from the 2013-14 season. The duo combined to log 2,350 minutes in 70 games. For comparison sake, Valpo's two leading players in minutes played (Jessi Wiedemann and Charae Richardson) combined for 1,970. The Flames, who went on to win the 2014 WBI, project to contend with Cleveland State for a podium finish in the Horizon League. Seniors Imani Gordon (16.6 PPG, 9.4 RPG), Cari Coleman (15.1 PPG, 39.6% 3FG pct), and Kiersten Green (14.5 PPG) provide ample offense for head coach Kate Peterson Abiad. Cleveland State returns 88.6% of their scoring and 87.4% of their rebounding from a 2013-14 campaign that saw the Vikings finish one game out of third place. Youngstown State began last season's conference slate 6-0 before dropping three straight en route to a 10-6 finish. Heidi Schlegel is back for her senior season. As a junior, Schlegel averaged 20.0 points and 8.0 boards per contest. The graduation of Liz Hornberger, Karen Flagg and Monica Touvelle represent sizable holes in a Penguin lineup that welcomes seven freshmen this season.

Oakland lost last season's leading scorer Bethany Watterworth and block leader Kim Bee to graduation. Juniors Elena Popkey (13.6 PPG, 6.2 RPG, 4.1 APG) and Olivia Nash (11.2 PPG, 7.1 RPG) are tasked with incorporating six freshmen into their system. Milwaukee lost a crucial player in Angela Rodriguez after last season and that gap only widened with the announcement that Avyanna Young transferred out to Wisconsin. Young made quite the impression on Valparaiso last February when she poured in a career-high 36 points in the Panthers' 85-80 win over the Crusaders at the Klotsche Center. Senior Ashley Green represents the lone holdover in the top half of UWM's statistical leaders from last year. Green averaged 14.2 points and 6.7 rebounds per game in 2013-14. Detroit lost more than 55% of its offensive production this past offseason. Senee Shearer (19.5 PPG) led the scoring attack for the Titans last season, but she graduated. Megan Galloway, who was named to the 2014 Horizon League All-Freshmen Team following a nice 9.5 PPG, 7.6 RPG line in league play, transferred to Miami (OH). Ellisha Crosby returns 17.5 points and 7.4 rebounds per tilt while Tayelor McCalister and Haleigh Ristovski will help shoulder the load.