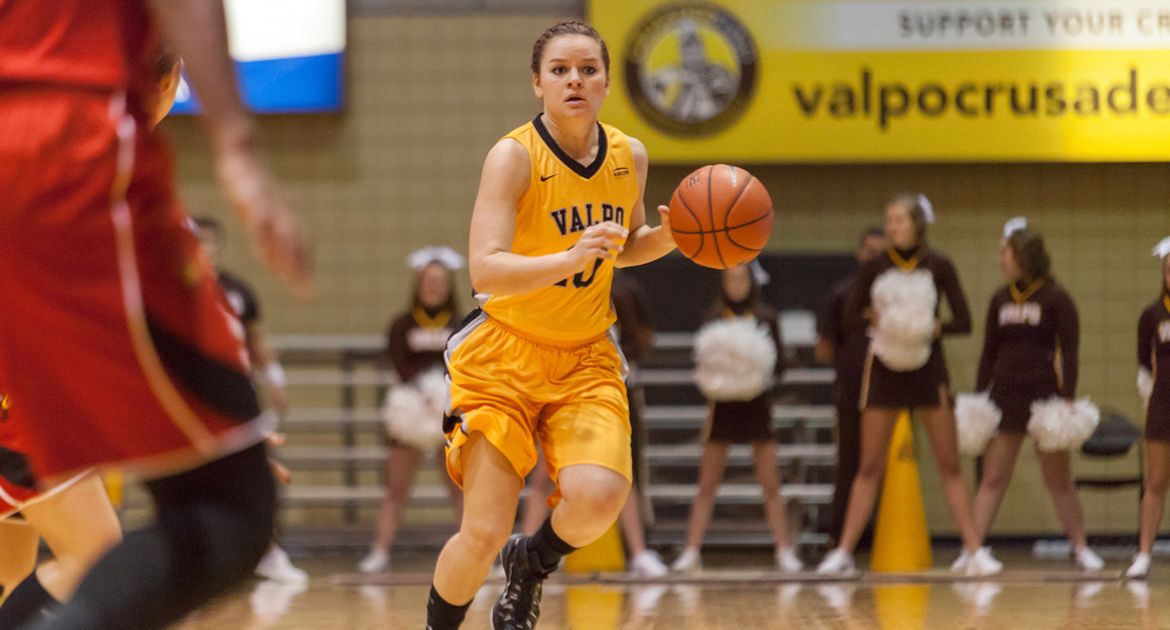 Annemarie Hamlet and the Crusaders aim for their first win in the month of December this Saturday at SIU-Edwardsville. (Fares Alshammary)
Valparaiso at SIUE | December 20, 2014
Related Links
Related Links

Next Up in Crusader Basketball: Valparaiso heads south for its penultimate game of the 2014 calendar year. The Crusaders seek their first victory in the month of December as SIU-Edwardsville returns home following a 69-47 loss to Northern Illinois on Wednesday evening in DeKalb. A win Saturday would represent the Brown and Gold’s first in the state of Illinois since January 22nd, 2011, when they handed Loyola (Chicago) a 65-58 defeat in the Windy City.

Last Time Out: For the second straight game, Valpo couldn’t recover from a strong start from its opponents. Illinois raced out to an 18-0 lead en route to an 80-58 triumph over the Crusaders at the ARC. The Brown and Gold responded well in the second half - even outscoring the Illini 39-37 - but it was too little, too late. Freshman Dani Franklin was 8-for-12 from the field as her 18 points led Valparaiso in scoring for the fourth time this season.

Head Coach Tracey Dorow: Tracey Dorow (20-52) is in her third season at the helm of the Valparaiso women’s basketball program in 2014-15. She collected her 250th career victory on November 14th, 2014 after a 91-57 walloping of Butler. In her first season, Dorow led the Crusaders to eleven victories overall, including five in Horizon League play. Dorow arrived in Valparaiso after 14 seasons at Ferris State. She compiled a 232-163 record while with the Bulldogs. Furthermore, Ferris State posted the #1 grade point average in all of Division II for the 1999- 2000 women’s basketball season as well as the #2 ranking in 2002-03. Series Notes: Valpo and SIU-Edwardsville have met just twice with both sides winning a contest. The Crusaders won the first-ever matchup on Nov. 18th, 2009 at the ARC. The teams met two years later in Edwardsville with the Cougars claiming a 67-64 overtime thriller at the Vadalabene Center.

Storylines...
- Only one of Valpo’s ten games thus far has been decided by fewer than 15 points.
- Opponents have made 12 or more three-pointers four times in their last seven games versus Valpo.
- SIU-Edwardsville was 0-for-6 beyond the arc Wednesday night versus Northern Illinois.
- The Crusaders have allowed 80 or more points in their last six games.

Jessica Carr
- Has distributed eight assists (career-high) twice in the last three games (vs. Tulsa, vs. Illinois).
- Recorded game highs in points (16) and assists (6) to lead Valpo to a 79-61 win versus Tennessee Tech on Nov. 22nd.

Annemarie Hamlet
- Scored 11 points in her Crusader debut vs. Butler on Nov. 14th.
- Averages 21.6 minutes off the bench for Valpo.

Georgi Donchetz
- Made her collegiate debut at South Dakota and knocked down her first - and only - three-point attempt.

Anne Hamilton
- Saw a season-high 20 minutes Wednesday at South Dakota.
- Was a perfect 2-for-2 from the field vs. Butler in her Crusader debut.

Lexi Miller
- Owns the team’s best assist-to-turnover ratio (1.3).
- Finished a point shy of her career-high at NIU as she guided Valpo with 17 points on 4-of-5 shooting from three-point range.

Jasmyn Walker
- Valpo’s leading rebounder (6.8 RPG) and shot blocker (5).
- Has started all ten games to open her Crusader career.
- Ripped down 14 rebounds to go with nine points at NIU.

Haylee Thompson
- Was 4-of-6 from the floor and had 9 boards vs. Illinois last Saturday..
- Has scored at least eight points in four consecutive games.
- Secured ten boards at Akron.