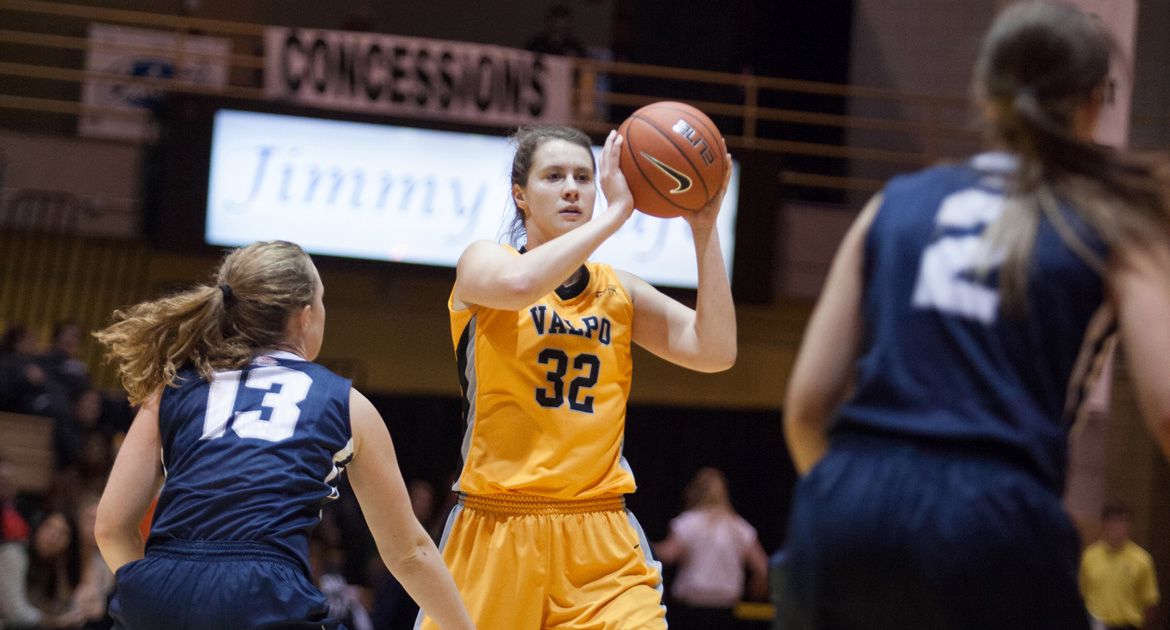 Next Up in Crusader Basketball: One more non-conference test awaits Valparaiso before Horizon League play begins Thursday in Cleveland. The Crusaders will host Stetson on Saturday afternoon in a 1:35 pm CT tipoff. The Hatters ride into town on a three-game winning streak and have yielded more than 60 points just once in their last six contests.

Last Time Out: Three Crusaders recorded double-doubles (Annemarie Hamlet, Haylee Thompson, Jessica Carr) while freshmen Dani Franklin and Jasmyn Walker each broke the 20-point plateau in a 109-81 win over Purdue-Calumet. Abby Dean (14) and Anne Hamilton (11) also finished in double figures as the Brown and Gold registered their highest single-game point total since Feb. 3rd, 1993. Valpo corralled a season-high 58 rebounds in its first win in the month of December.

Head Coach Tracey Dorow: Tracey Dorow (21-53) is in her third season at the helm of the Valparaiso women’s basketball program in 2014-15. She collected her 250th career victory on November 14th, 2014 after a 91-57 walloping of Butler. In her first season, Dorow led the Crusaders to eleven victories overall, including five in Horizon League play. Dorow arrived in Valparaiso after 14 seasons at Ferris State. She compiled a 232-163 record while with the Bulldogs. Furthermore, Ferris State posted the #1 grade point average in all of Division II for the 1999-2000 women’s basketball season as well as the #2 ranking in 2002-03.

Series Notes: Saturday represents the first ever meeting between these two schools on the hardwood. Valparaiso is the farthest that Stetson has traveled since December 1st, 2009 when the Hatters trekked to Queens, New York to face St. John’s.

Storylines...
- Despite a dominant 11-3 record all-time on January 3rd, Valpo suffered its worst loss in school history on this date 25 years ago. Central Missouri lambasted the Brown and Gold, 100-19.
- Stetson is the only non-conference team on Valpo’s schedule with green in its color scheme.
- The Crusaders have concluded non-conference play with wins in six of their last eight seasons.

@ValpoWBB...
- @ValpoWBB closed out the 2013-14 slate with a 6-25 overall record, 3-13 in the Horizon League.
- @ValpoWBB was picked to finish eighth in the Horizon League in the 2014-15 Preseason Poll.
- @ValpoWBB has yet to play a game decided by single digits.
- @ValpoWBB’s Dani Franklin is averaging 0.62 points per minute played. The closest regular with that efficiency is Abby Dean (0.36).
- Three @ValpoWBB players (Thompson, Hamlet, Carr) recorded double-doubles in Tuesday’s win over Purdue-Calumet.

Abby Dean
- Finished in double figures (14) Tuesday for the first time in eight games.
- Registered a career-high 21 points on 9-of-11 shooting vs. Butler on Nov. 14th.

Annemarie Hamlet
- Tallied her first double-double in a Crusader uniform on Tuesday.
- Scored 11 points in her Crusader debut vs. Butler on Nov. 14th.

Anne Hamilton
- Has scored in double figures in back-to-back games.
- Nailed four treys as part of a 16-point first half at SIU-Edwardsville on Dec. 20th.

Jasmyn Walker
- Valpo’s leading rebounder (6.5 RPG) and shot blocker (8).
- Has started all twelve games to open her Crusader career.
- Ripped down 14 rebounds to go with nine points at NIU.

Haylee Thompson
- Captured her first double-double since joining Valpo on Tuesday.
- Set season highs in points (15) and rebounds (11) vs. Purdue-Calumet.

Jessi Wiedemann
- Out indefinitely (back).