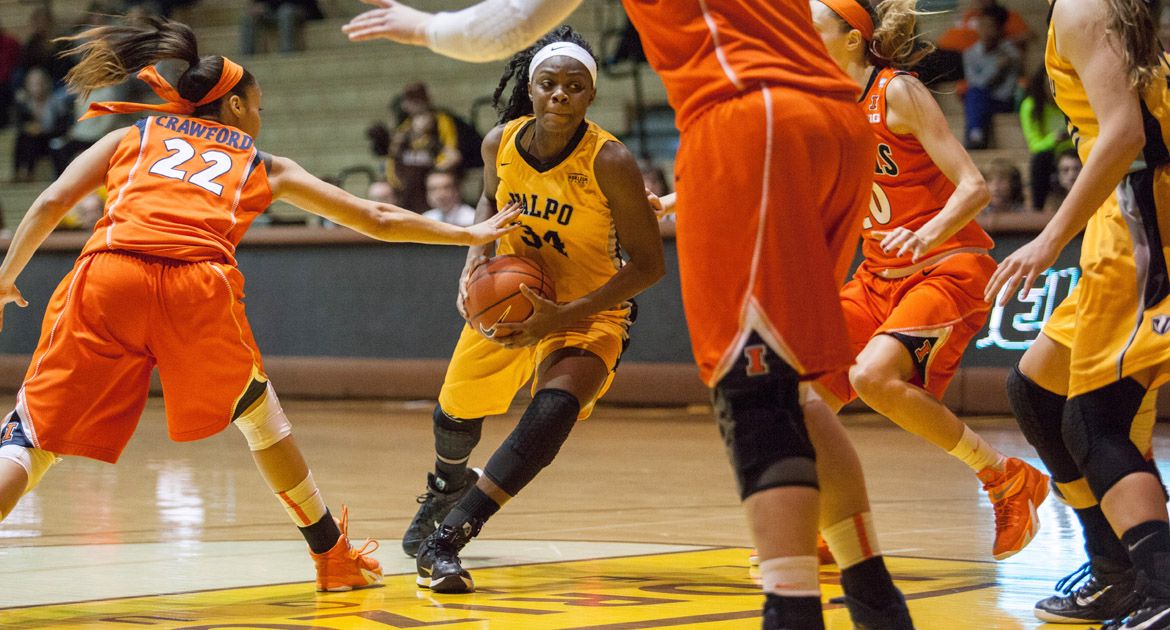 The Valpo women's basketball team enjoyed a balanced scoring attack in its opening game of the USD-Courtyard San Diego Central Classic, but San Diego parlayed a 49-24 rebounding margin into a 76-60 win over the Crusaders Friday afternoon at the Jenny Craig Pavilion.

The Toreros were spearheaded by All-West Coast Conference sisters Malina and Maya Hood. Malina rattled off 15 points and seven rebounds in the first half. Maya had a quiet first two quarters, but came alive in the second half.

San Diego's edge expanded to 11 points just three-and-a-half minutes into the second half, but Franklin and the Crusaders led a tenacious charge quickly thereafter. Imani Scott-Thompson (Akron, Ohio/Firestone [Dakota College at Bottineau]) knocked down a three-pointer from the corner to cap a 12-3 Valpo surge that brought it to 44-41. The tide shifted back towards the Toreros before Valpo could make it any closer, though.

Freshman Meredith Hamlet (McBain, Mich./McBain) logged an up-tempo 26 minutes. She registered a team-high 12 points, including a perfect 4-for-4 mark from the charity stripe. Walker ended the day one rebound shy of her first double-double of the season. She notched 10 points and nine boards. Lexi Miller (Caledonia, Mich./Caledonia) nailed three treys to account for her nine points.

Valpo (0-3) will turn right around and face Northern Colorado (3-2) Saturday at 4:00 pm CT/2:00 pm PT inside the Jenny Craig Pavilion. The Bears dispatched Akron, 78-65, in the early game Friday. Brandon Vickrey, Parker Gatewood, and Renee Turpa will be on the call for WVUR (95.1 FM, Valparaiso). Live stats will also be available at ValpoAthletics.com.