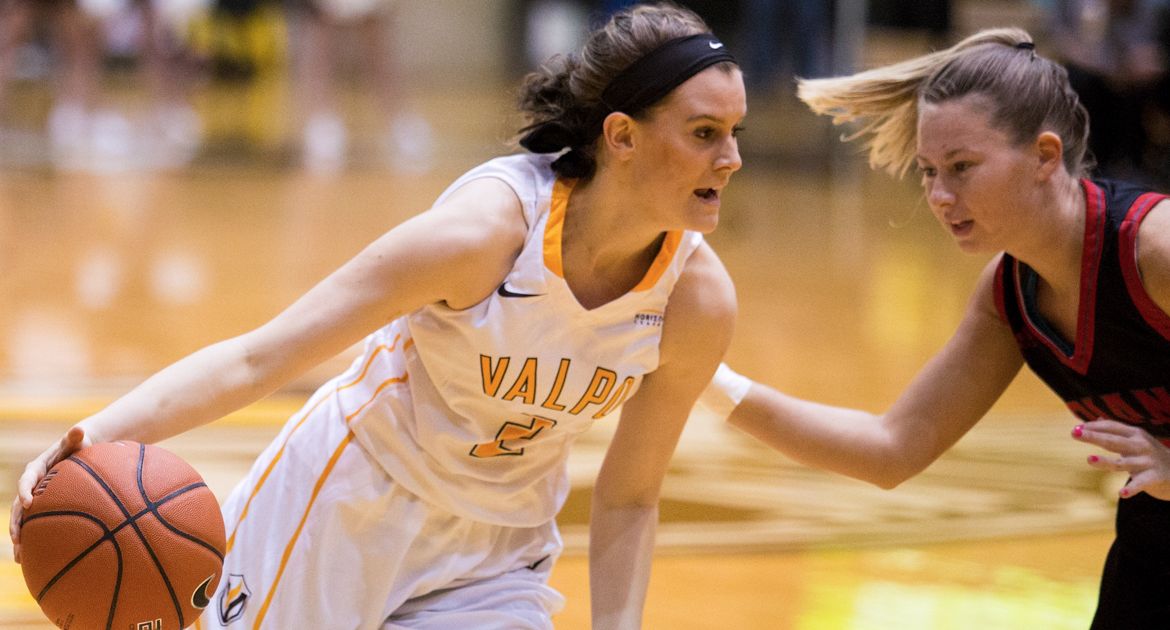 Freshman Meredith Hamlet was a perfect 5-for-5 from beyond the arc as her 19 points led the Brown and Gold Saturday night at the ARC. (Avery Davis)
IU-Northwest at Valpo | December 12, 2015
Related Links
Related Links

Five Crusaders finished in double figures as Valpo sailed to a 79-57 win over IU-Northwest Saturday night at the Athletics-Recreation Center.

The Crusaders led tip-to-horn in an uptempo tilt. IU-Northwest's fullcourt press played a strong hand in 21 Valpo turnovers, but it also allowed for several fast-break baskets.

The Brown and Gold opened the contest with a 15-2 run, but the RedHawks immediately responded with a 13-4 surge of their own. The Crusaders opened the floodgates in the second quarter, using a 26-15 margin to enjoy a 45-30 halftime advantage.

Franklin was 5-for-5 from the field in the first half. Her 11 points led Valpo at the break. Four of Lindfors' six blocks came in the first twenty minutes.

Hamlet one-upped the sophomore in the second half. She went 5-for-5 from three-point range as part of 15 second-half points. Hamlet is now averaging 11.0 points per game after her first nine collegiate games.

The Crusaders polished off a strong defensive effort over the final twenty minutes. Six of their eight steals came in the third and fourth quarters while forcing nine RedHawk turnovers.

Georgi Donchetz (Savage, Minn./Burnsville) made her much-anticipated return to the floor. The sophomore corralled a career-high five rebounds in Valpo's second win of the season.

Valpo (2-7) will have a week to prepare for SIU-Edwardsville (4-6). The Cougars visit the ARC next Saturday as part of a doubleheader with the men's team. Tipoff is slated for 4:00 pm CT. Links to the audio, video, and live stats are posted at ValpoAthletics.com.