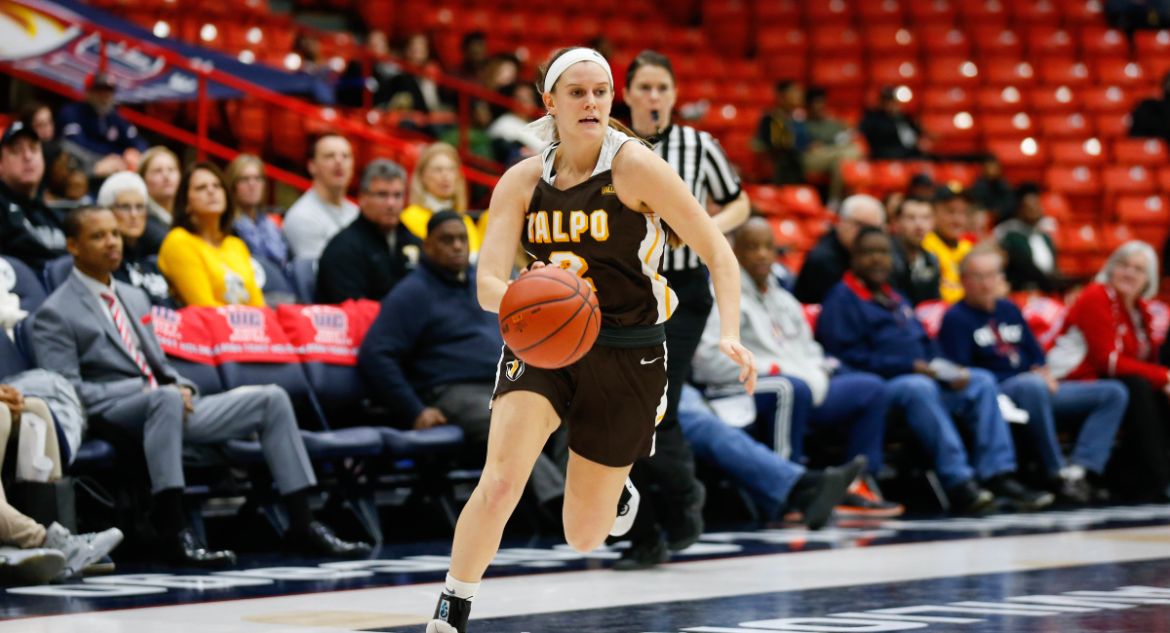 Saturday became a night to remember for the Valparaiso University women’s basketball team.

The evening’s first slice of program history occurred when Meredith Hamlet (McBain, Mich. / McBain) made a layup with 9:22 remaining in the third quarter, becoming the 15th Valpo player to reach 1,000 career points. When the game’s final horn sounded and Valpo held on for a heart-stopping 78-76 win over St. Francis Brooklyn as part of the Vinewood Farm Classic hosted by Morehead State, it was Mary Evans’ turn for her moment in the sun. The first-year head coach smiled and breathed a sigh of relief after recording her first win as a collegiate head coach.

But amidst a game featuring two unforgettable individual accomplishments, it was very much a team win for a short-handed, injury-riddled group playing its fourth game in seven days.

“I’m really proud of those kids. This was our fourth games in seven days. We showed a lot of fight tonight through nicks and bruises and injuries. They fought for each other. That’s the thing I appreciate most; our players care about each other and they fight for each other.”

“Meredith Hamlet is a very talented offensive player. We’re asking her to do a few things different and it’s causing her to be a little hesitant, but she’s understanding how to use her teammates and the better she does that, the easier the game is going to get for her. She showed great mental toughness to come out here and really lead us in that third quarter. I’m glad we got that third quarter curse off our backs after struggling in that quarter in recent games. It was a great team effort tonight.”

“We went to a ton of motion offense tonight and our players did a great job making decisions and sharing the basketball with each other. We played to a great tempo. I was excited to see 11 3s again. I’m also really proud of what we accomplished defensively tonight. To hold a team that was averaging 95 to 76 says a lot about the way our players defended. Offensively, we did a nice job sharing the basketball. I’m happy we ended the road trip on a high note and are able to have a fun bus ride home after a win.”

“It’s been great to bond on the road. Our team is so close and we’ve been together since the summer, so they spend a lot of time together. However, this is nice for us to spend time together as coaches. I want to get to know these players really well and I want them to get to know me and be a part of my family. Road trips like this open that up. Now, we’re excited to get back to practice next week and continue to get better as we go forward.”

After a busy stretch of basketball and a long week on the road, Valpo (1-4) will finally get some much needed practice time and rest over the next week. After eight days without a game, Valpo will return to the court after the Thanksgiving holiday to host Toledo on Monday, Nov. 26 at 7 p.m. at the Athletics-Recreation Center. The game will be broadcast on ESPN+ and 95.1 FM Valparaiso with links to live video, audio and stats available.