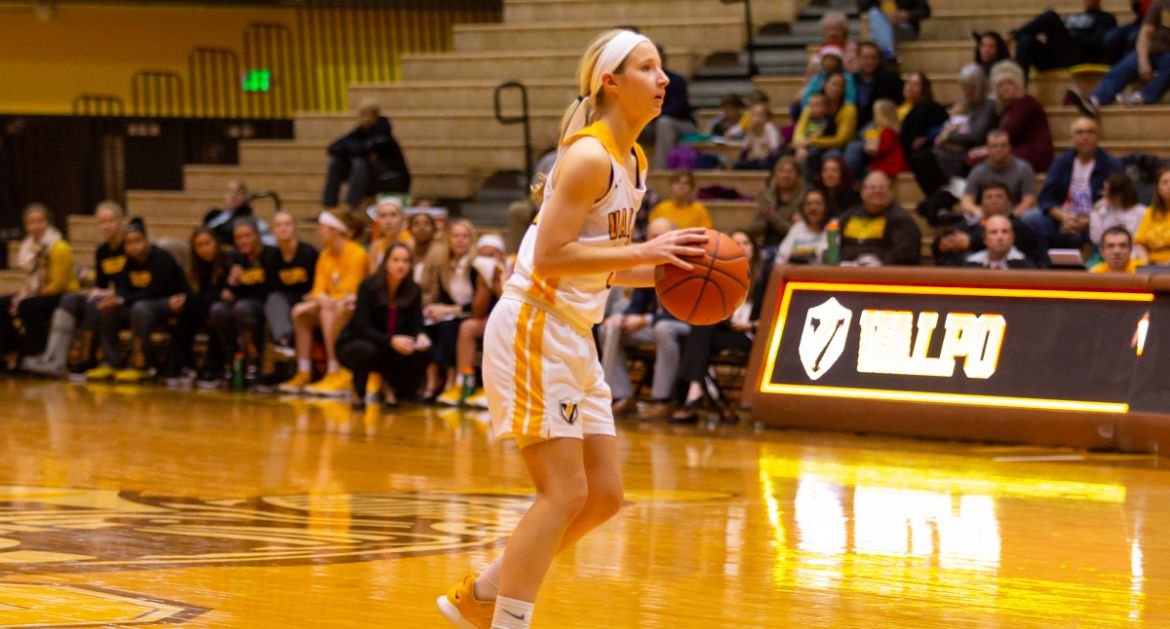 A 3-point shooting contest broke out on Friday evening at the Athletics-Recreation Center as the Valparaiso University women’s basketball team matched a school record that had stood for 14 years with 17 triples in a 79-72 defeat to Bowling Green. The Falcons hit 14 3s of their own to help offset Valpo’s record-tying night, which featured 11 3s before halftime and nine in the second quarter.

“Our players’ willingness to attack and willingness to pass to each other led to all of the 3s. We played our most unselfish game of the year. We had an aggressive mindset of driving and then finding players on the perimeter, and then those players made shots. We talk every day about their ability to shoot open catch-and-shoot 3s and do it at a high percentage, and they did that tonight.”

“I’m really liking Hannah’s progression. She has missed significant practice time, and now she’s starting to come into her own. She’s doing a tremendous job of facilitating for others while also being aggressive and looking for her shots. I expect her to continue to grow and get better and better throughout the season.”

“Both times Bowling Green went on a run, we didn’t match their intensity. During those stretches, they were beating us to a lot of loose balls. Both times we pointed it out, and our players did a nice job of toughening up and playing harder. It’s a learning and growing process, and I think that was a tremendous team effort with seven people including two freshmen out there. I told them: ‘Let this hurt, but don’t hang your heads.’ I thought the effort was solid.”

“We’re heads and shoulders above where we were on opening night. Our offense is getting better and our understanding of what we’re trying to do is getting better. Tonight in the first half we had a number of steals and took a number of charges defensively. We played a really good first half of defense, then in the second half we lost our focus and couldn’t make those same plays. We’re going to continue to grow in that facet. I’m excited to get a couple kids back from injuries after Christmas so we’ll be a deeper, more experienced team."

Valpo (4-8) will compete in one final tune-up before conference play – an exhibition against IU Northwest on Dec. 31 at noon at the Athletics-Recreation Center. There will be no video broadcast of the game, but it will air on 95.1 FM Valparaiso, WVUR. Links to live audio and stats will be available on ValpoAthletics.com.