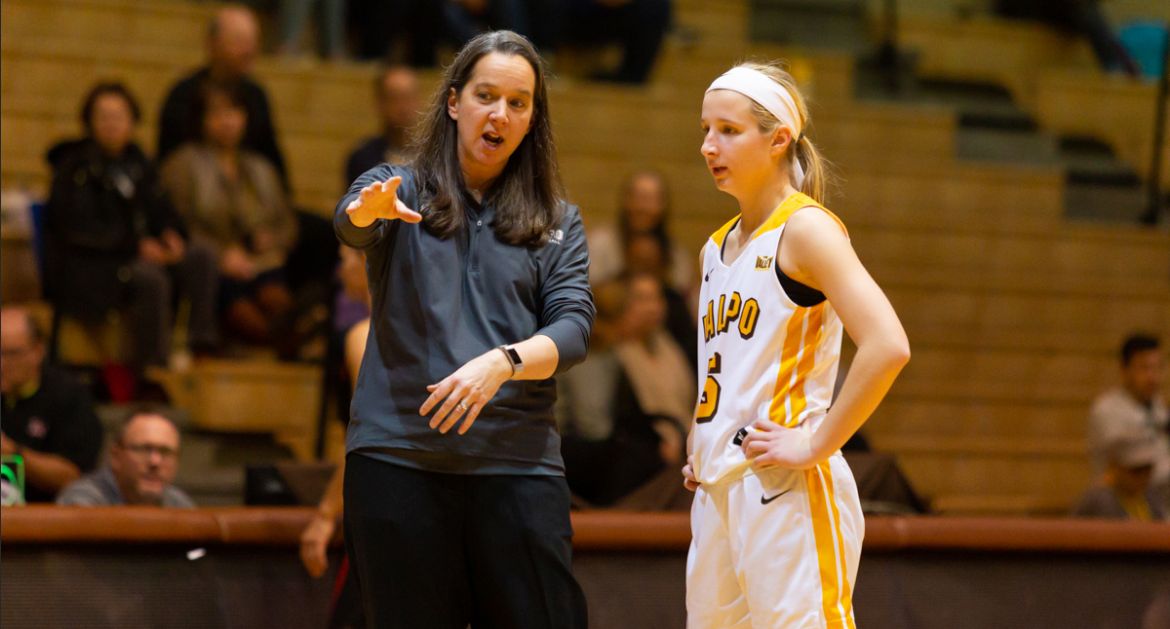 Shay Frederick is one of two freshmen on the roster for Valpo.
Valparaiso at Loyola Chicago | January 06, 2019
Related Links
Related Links

Next Up in Valpo Basketball: The Missouri Valley Conference portion of the Valparaiso University women’s basketball season gets underway on Sunday afternoon in the Windy City as Valpo clashes with Loyola in a game that tips off at 1 p.m. The second year of Valpo in The Valley will officially begin as Valpo competes in its first regular season game since Dec. 21 after a 15-day stretch without an official game that did feature an exhibition contest.

Last Time Out: Valpo tied a school record for 3-pointers in a single game with 17 on Dec. 21, but came up shy in a 79-72 defeat to Bowling Green in the nonconference finale at the ARC. Grace Hales was the leading scorer with 15 points and knocked down five 3s. Valpo played an exhibition matinee on the final day of 2018, beating IU Northwest 85-59.

Following Valpo: Sunday’s game will be broadcast on ESPN3, which is available free of charge with a cable subscription. This contest is a Valley featured game, with R.C. McBride (play-by-play) and Laura Leonard (color commentary) on the call. The game can also be heard as always on 95.1 FM WVUR with Ben Ariano (play-by-play) and Brandon Vickrey (color commentary). For in-game updates, follow @ValpoWBB on Twitter. Links to live video, audio and stats are available on ValpoAthletics.com.

Series Notes: Valpo had good success against Loyola a year ago, winning all three meetings including a 63-46 victory in the first round of the Missouri Valley Conference Tournament. That marked Valpo’s first MVC Tournament triumph in any sport. It was also the first time the women’s basketball program notched three wins against one team in the same season since 2003-2004. Valpo kept Loyola leading scorer Abby O’Connor in check to the tune of 1-of-13 shooting. She also struggled against Valpo on Feb. 11, 2018, a 63-53 Valpo win in Chicago, when O’Connor was held to two points on 0-of-9 shooting. Meredith Hamlet exploded for 19 fourth-quarter points in that one after being held scoreless through three quarters. Valpo also beat Loyola 76-60 on Jan. 12, 2018 at the ARC. Valpo and Loyola shared Horizon League affiliation from 2007-2013. Valpo owns a commanding 21-5 lead in the all-time series and holds a 9-4 record in games played at Loyola.

Frequenting the Windy City: Valpo is no stranger to Chicago this season as this marks the team’s third trip to Chi-Town. Valpo played at UIC on Nov. 7 to open the season and made the commute to Chicago State for a game on Nov. 29. The last time Valpo visited three different schools in Chicago in the same season was 2010-11, a year that featured a season-opening trip to DePaul as part of the preseason WNIT and Horizon League visits to Loyola and UIC.

It's Raining 3s: Valpo drained 17 3-pointers on Dec. 21 vs. Bowling Green, matching a school record that was set in 2004. The 17 triples tied for the fourth most in the history of the Missouri Valley Conference. Valpo fired off 38 3-point attempts, the second most in program history and the most since 1992. Bowling Green also hit 14 3s, so the two teams combined to knock down 31 shots from beyond the arc. Valpo dished out 19 assists in the game against the Falcons, the team’s most since Jan. 26 of last season (20 vs. Evansville).

Rising the Scoring Ranks: For the third consecutive season, a Valpo player climbing the all-time scoring list is a continuous storyline. After two straight seasons of Dani Franklin moving up the Valpo ranks and eventually finishing second in program history in career points, it's Meredith Hamlet's turn. Hamlet’s career total currently stands at 1,120. She has usurped Tamra Braun (2003-2007) for 11th in program history. The next target is the Top 10 as Aimee Forsman (1988-1992) ranks 10th at 1,195.

3-Point Watch: Meredith Hamlet has made 178 career 3-pointers and recently cracked the Top 5 in program history in that area. She needs five more to draw even with Dani Franklin (2014-2018), who is fourth at 183.

Familiar Faces: Two years ago, Valpo sophomore Nicole Konieczny and Loyola sophomore Abby O’Connor were taking the floor as teammates with a state championship on the line. Now, the South Bend St. Joseph graduates oppose one another at the collegiate level. Konieczny scored nine points and O’Connor had eight in a 57-49 victory over North Harrison in the Class 3A state final at Bankers Life Fieldhouse in Indianapolis when O’Connor and Konieczny closed out their prep career together in style on Feb. 25, 2017. In addition, Loyola junior Tiara Wallace and Valpo freshman Ilysse Pitts had two years of overlap at Montini Catholic High School.