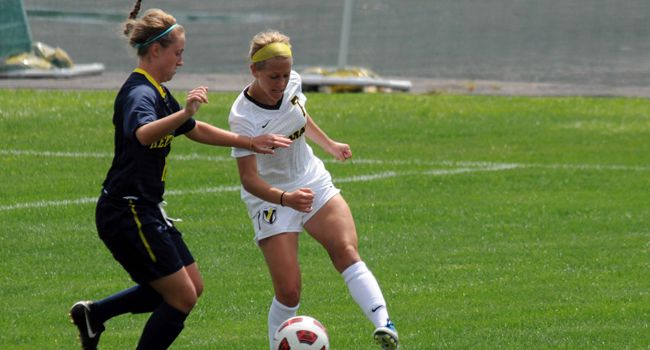 This Week in Crusader Soccer: Valparaiso ventures away from Northwest Indiana for the first time in 2011 this weekend to begin a four-game road trip.  The Brown and Gold will head to Lynchburg, Va. for the Liberty Invitational for a pair of matches.  The Crusaders will face Coastal Carolina in a neutral site contest on Friday before battling the host Flames on Sunday afternoon.

On the Air: Neither match this weekend is being broadcast online or over the airwaves.  Live stats will be available through valpoathletics.com for both matches though.

Head Coach John Marovich: John Marovich holds a 27-25-9 record both overall and with Valpo in his fourth season at the helm of the Brown and Gold.  Just the third head coach in program history, Marovich has the best winning percentage (.516) ever at Valpo, and ranks second in total victories.

Series Notes: Valparaiso has never faced Coastal Carolina on the pitch.  The Crusaders are 1-0 all-time against Liberty, posting a 1-0 triumph over the Flames on Sept. 18, 2009 at Eastgate Field. Both opponents this weekend are members of the Big South Conference, and the only match against the league the Crusaders have ever played was against Liberty.  Valpo will also face Big South foe Campbell later this year as part of the Crusader Classic.

Wrapping Up Last Week’s Action: Valpo outshot Evansville 19-10, including an 11-4 advantage on goal, but was not able to find the back of the net on Sunday afternoon at Eastgate Field.  Stephanie Thompson scored with just 1:17 remaining in the match for the Purple Aces to give Evansville the 1-0 victory.  Brooke Henderson fired off six shots for Valpo while Kristen Manski made three saves in goal.  Chaviel Harrison made 10 saves between the posts for the Purple Aces.

Scouting Coastal Carolina: The Chanticleers played Georgia Southern to a 1-1 double-overtime draw last Friday to open the home portion of their schedule after dropping a pair of matches at North Florida’s Tournament. Christina Stern and Alyssa Clark have scored the goals this season for the Chanticleers while Saundra Baron has posted a 2.48 goals against average in the net, playing all 290 minutes.  Coastal Carolina has been outshot 51-24 on the season, including 22-11 on goal.

Scouting Liberty: The Flames are coming off of a 1-1 double-overtime draw to Longwood on Monday evening in the team’s home opener after falling at #6 Virginia on Friday night to open the season.  Aimee Luurtsema and Silvia Bentancourt have scored the two goals on the year for the Flames while Megan Warner has added an assist.  Karen Blocker has notched a 4.50 goals against average playing every minute in goal for Liberty.  The Flames have been outshot 40-18 thus far this year.

Fire Away: Valpo launched 19 shot attempts on Sunday against Evansville, but was unable to find the back of the net.  Eleven of the attempts were on goal, forcing the Purple Aces to make the saves.  For the season Valpo has now taken 44 total shots, 24 of which were on frame, for a .545 accuracy rate, unfortunately the Brown and Gold has only beaten the goalkeepers in one match thus far.

Moving Onto the All-Time Scoring Charts: Luisa Desario has moved into a tie for 10th place all-time at Valpo with 26 career points after picking up a goal and an assist against IPFW.  She is tied with Jessie White (2006-2009) on the all-time charts.  The junior has 10 career goals and six assists, and is just one goal shy of the top-10 all-time in a Crusader uniform.  Rachel Hoaglin now has 24 career points, including nine goals, after her three-point match against the Mastodons as well, and is on the verge of moving on the career charts as well.

A Fixture on Defense: Senior Tracy Roos has started all 61 matches on the Valpo backline since arriving on campus in 2008.  Junior Janine Lytle has also started every match of her three-year career thus far, all 42 contests.

This and That: Kristen Manski made her first appearance of the season on Sunday, making three saves in goal ... Brooke Henderson is seventh in the Horizon League with 11 shot attempts this season ... Amanda Ulin, Laura Romberg, and Tracy Roos, all defenders, are the only Crusaders to have played all 270 minutes this season.