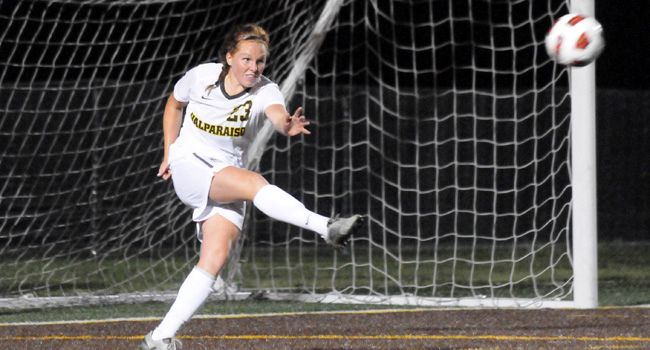 Janine Lytle (Wooster, Ohio/Wooster H.S.) scored her first goal of the season and Valparaiso posted its first shutout of the season on Friday afternoon as the Crusaders defeated Coastal Carolina 1-0 at Osborne Stadium in Lynchburg, Va. to open the Liberty Invitational.

“I’m very pleased with the clean sheet today,” head coach John Marovich said after the match.  “We played well against a difficult style of play and fought through to get the ‘w’”.

Lytle knocked home a free kick off of the foot of Catherine Terrell (Brighton, Mich./Brighton H.S.) just 16:04 into the contest, and that goal held up as the Crusaders moved their record back to the .500 mark on the season.

“There was not a lot of space out there today so we had to take advantage of any set pieces we were given,” Marovich added.  “Lytle got to the second ball and did a good job of finishing.”

Valpo had several scoring opportunities early in the match, winning a pair of corner kicks in the opening 11 minutes.

After taking the lead on Lytle’s goal, the Crusader defense stepped up, the Chanticleers to fire just one shot attempt over the final 23 minutes of the first half to take the one goal advantage into the locker room.

Kristin Manski (Saint Charles, Ill./North H.S.) stepped up in the second half, making her first save of the match, with just over 32 minutes to play in the contest.  The sophomore netminder finished the day with three saves while sharing the shutout with Rachel DeFrank (Mason, Ohio/Mason H.S.), who played the final 7:30 of the match.

With just under 27 minutes to play, Casey Pedersen (Northville, Mich./Mercy H.S.) looked to add an insurance goal for Valpo, firing a blast from the top of the 18-yard box, but the ball ricocheted off of the crossbar.  Pedersen had another opportunity with about 11 minutes remaining, but her header attempt was saved by Saundra Baron.

A flurry in the two minutes resulted in three more shots on goal for the Crusaders, two by Brooke Henderson (Westlake, Ohio/Westlake H.S.) and another by Lytle, but all three attempts were saved by Coastal Carolina (0-3-1).

Valpo outshot the Chanticleers 15-11 on the afternoon, including a 5-3 advantage on goal.  Baron made three saves between the posts for Coastal Carolina.

“In this environment to come on the road and get a victory is great,” Marovich concluded.  “I’m looking forward to getting  back after it on Sunday.”

Valparaiso (2-2) will remain in Lynchburg for day two of the Liberty Invitational on Sunday afternoon, facing the host Flames of Liberty.  Kickoff is set for 1:30 p.m. CDT.

Match Notes: This was the first meeting ever between Valpo and Coastal Carolina … the Crusaders are now 2-0 all-time against teams from the Big South Conference … Lytle’s goal was the third of her career and second match-winner … Terrell’s assist was her first of the season and second of her career … this was Valpo’s first shutout victory since a 1-0 triumph at Butler on Oct. 3, 2010 … Terrell and Luisa Desario (Bartlett, Ill./Bartlett H.S.) led Valpo with three shots each while Henderson and Terrell had two of the five shots on goal each … Katie Gratzianna (Elmhurst, Ill./York H.S.) made her first appearance of the season for the Brown and Gold.