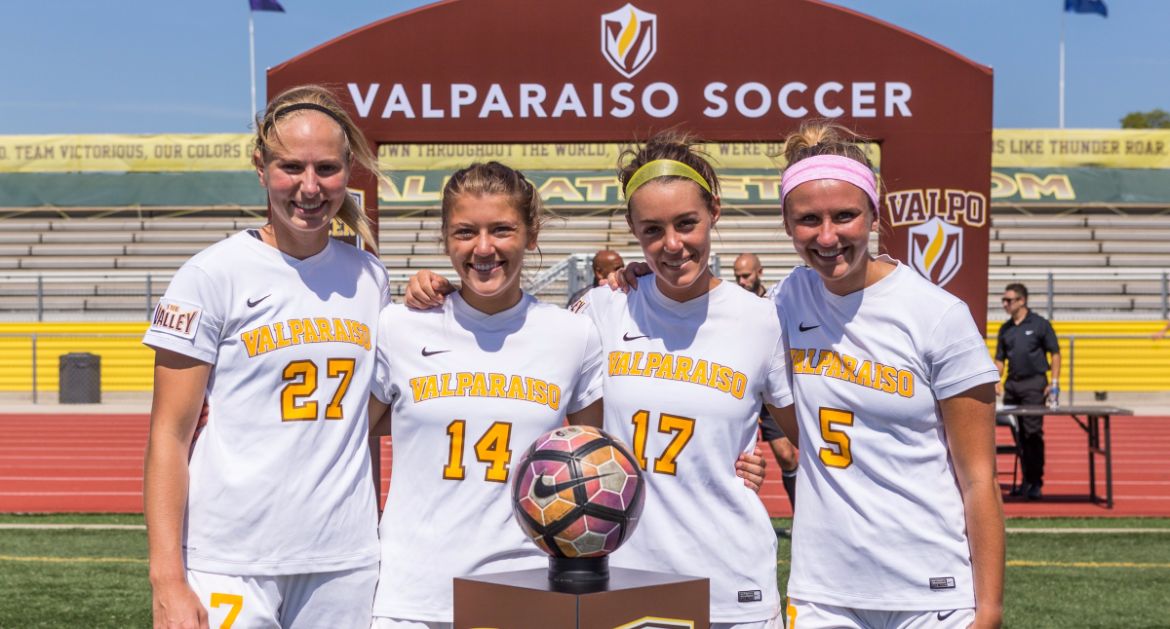 The Crusaders' four seniors pose prior to Sunday's win.
Belmont at Valparaiso | September 03, 2017

The Valparaiso University women’s soccer program celebrated its four seniors prior to Sunday afternoon’s match on Senior Day at Brown Field and then proceeded to take care of business once the match started, holding down a stout Belmont attack to earn a 1-0 victory over the Bruins in a matchup of regionally-ranked squads. The Crusaders are now a perfect 4-0-0 at Brown Field this season.

Valpo struck for the game’s lone goal against the run of play late in the first half, taking advantage of a set piece opportunity in the attacking third. Freshman Keegan Maris (Batavia, Ill./Batavia) served into the box for junior Sydney Griffin (Hinsdale, Ill./Hinsdale Central [New Hampshire]), whose looping header snuck inside the upper-left corner.

- Belmont put pressure on the Crusaders’ defense throughout the first half, tallying 14 shots – including seven on goal – over the first two-thirds of an hour.

- Freshman goalkeeper Kezia Gesell (Winnipeg, Manitoba/Glenlawn Collegiate Institute) was up to the task however, making all seven stops. A number of Gesell’s saves were of the highlight-reel variety, including a leaping punch into the bar of an effort from Belinda Mendiola in the 14th minute and a lunging save on a shot from Emily Whitcomb in the 23rd minute.

- Valpo’s chances were fewer in the opening period, but the Crusaders did have a pair of strong opportunities. Junior Cory Griffith (Lemont, Ill./Providence Catholic) found herself on a break one-on-one with Belmont goalkeeper Abby Hunt in the 21st minute, but pushed her shot right of the goal. Griffith later had a header off a set piece in the 31st minute go just wide as well.

- The Crusaders finally came through with the game’s first goal off the head of Griffin in the 41st minute. Valpo looked for another goal late in the first half, registering a trio of shots in the final four minutes, but would take the 1-0 advantage into the locker room.

- Gesell made a pair of stops on shots from Mendiola in the second half, but other than that, Valpo did much better to limit opportunities from the Bruins over the final 45 minutes and complete the clean sheet. Belmont would tally just four total shots, including just one last-ditch effort over the final 20-plus minutes, and did not earn a corner kick in the second half.

- Sunday’s win was the 34th over the four-year careers of the Valpo senior class.

- All four seniors earned spots in the starting XI on Sunday – for Chetosky, it was the first start of her Crusader career.

- Meanwhile, Gountounas went the full 90 minutes to continue an impressive streak. Dating back to last season, she has now played the last 1,810 minutes for the Crusaders – dating back to her entry off the bench against Kansas last Sept. 4 – without coming off the park.

- Griffin continues to find the back of the net at a torrid pace, netting her fourth goal in her first six games as a Crusader. Sunday’s tally was her second match-winner in that stretch, joining the decisive goal she scored against IUPUI.

- Maris has now assisted on consecutive match-winners for the Crusaders, setting up Valpo’s lone goal on Sunday after picking up the helper on the golden goal Friday night.

- Making just her third career start in goal and her first at Brown Field, Gesell earned her first career clean sheet with an impressive nine-save effort.

- Gesell’s nine saves were the most by a Crusader goalkeeper in a shutout since Kristen Manski stopped 13 shots in a 0-0 draw at Wright State in October of 2012.

- Valpo’s 4-0-0 start at home this season is its best start at home since moving to Brown Field, and matches the program’s best home record to start a season since the 2005 squad won each of its first six home fixtures. The 2008 team also won its first four home matches.

- After playing four of their first six matches at home, it will be a while before the Crusaders take to Brown Field again, as they play their next five matches on the road. Valpo returns home on Thursday, Sept. 28 to face Chicago State in non-conference play.

“It was a great opportunity for our team today to have to step up and compete against another regionally-ranked team. We’re really excited about getting the win, because Belmont is a good side. I feel like we grew as a team today, handling the system that Belmont played and the pressure they applied. They challenged us in ways we haven’t seen yet, and that will make us better and help us down the road.”

“We’re obviously excited for Kez, getting her first shutout as a Crusader today. She made some really impressive saves at the right time and managed the box pretty well.”

“It was great to see Syd continue to get on the scoresheet as well. Ultimately, though, today’s effort came down to a lot of little things. Whether it was Ava winning balls in the air in the midfield, defenders getting across their body, or Adi and Kelsey consistently going into challenges and being competitive, we needed everybody today. Everybody – whether they played five minutes or 90 minutes – had to contribute to make today’s result happen.”

Valpo (4-2-0) continues non-conference action Friday evening as it kicks off the stretch of road matches at Wright State. Kickoff is slated for 6 p.m. CT. The game will be broadcast live on WatchESPN and the ESPN app, with links for live video and live stats available via ValpoAthletics.com.