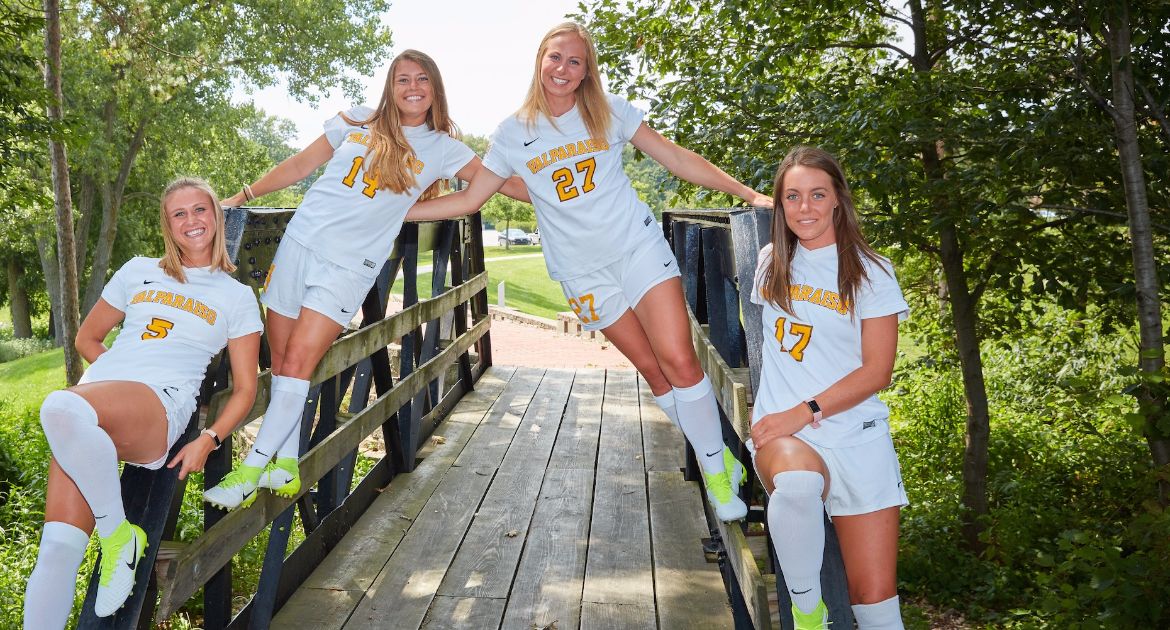 This Week in Crusader Soccer: The Valparaiso University women's soccer team returns home to Brown Field for another pair of matches this weekend, welcoming a pair of OVC opponents in Eastern Illinois on Friday night and Belmont on Sunday afternoon. Sunday's match will be the Crusaders' Senior Day, as Valpo will honor its four seniors prior to the match.

Previously: Valpo was stout defensively against a pair of strong foes at the Owl Classic last weekend, surrendering just three combined shots on goal, but could not come out victorious as the Crusaders dropped 1-0 decisions to FGCU and Florida Atlantic.

Looking Ahead: A five-match road swing begins next weekend for the Crusaders with a pair of road matches. Valpo will take on Wright State on Friday evening and face Fort Wayne on Sunday afternoon.

Following the Crusaders: Both matches this weekend will have live stats available through ValpoAthletics.com. In addition, Valpo's student radio station, WVUR (95.1 FM) will broadcast both games and live audio links will be available online.

Series Notes: Eastern Illinois - The Crusaders are just 5-7-1 all-time against the Panthers, but have earned all five victories in the last five meetings with EIU. Most recently, Valpo claimed a 3-1 win at EIU in September of 2014 as it rallied from a one-goal halftime deficit with three unanswered second-half tallies.

Belmont - Valpo owns a 3-1-0 advantage in the all-time series against the Bruins and earned a 2-1 win in extra time in the last matchup in September of 2015. April Cronin scored the golden goal in the victory just 48 seconds into the second overtime period.

Scouting the Opposition: Eastern Illinois - Coming off of a 5-13-0 season, the Panthers are off to a strong start in 2017, entering Friday's match at 2-1-1. EIU did drop its most recent match, a 2-0 loss at home to Milwaukee. Sara Teteak had posted three consecutive clean sheets in goal prior to surrendering the two goals against Milwaukee, while Sarah DeWolf has scored two of EIU's four goals on the season.

Belmont - The Bruins have started strong out of the gate in 2017 after a 6-9-4 record last year, winning all three of their matches entering the weekend. Belmont will have a challenge prior to arriving in Valpo as it takes on Tennessee Friday afternoon. The Bruins have found the back of the net 11 times already this year and it has been a diverse offensive attack with six different goalscorers - five of whom have tallied twice.

Crusaders Picked Fifth in Preseason Poll: Valpo has been chosen to finish in a tie for fifth place in the MVC preseason poll, as voted on by the conference’s head coaches. The Crusaders totaled 29 points in the preseason polling to tie UNI for fifth place. Illinois State received all but one first-place vote to top the poll, while Drake picked up the other first-place nod and was second in the polling.

Celebrating the Seniors: The Crusaders will honor a group of four players prior to Sunday's contest with Belmont as part of Senior Day ceremonies. The quartet, comprised of Lily Chetosky, Sydney Gountounas, Grace Rogers and Jordon Tindell, were part of Valpo's undefeated Horizon League championship side in 2014.

Limiting Opponents' Chances: While the Crusaders dropped both games in Florida by 1-0 finals, Valpo defensively did a great job limiting the number of opportunities it surrendered over the two matches. The Crusaders' two opponents combined for just 14 total shot attempts, only three of which were on goal, while Valpo also gave up just four corner kicks over the two matches.

Close Calls: The pair of 1-0 defeats on the weekend marked just the second time in the last eight seasons that the Crusaders have suffered back-to-back 1-0 losses – the only previous time in that stretch came against Milwaukee and Detroit in late October of 2015.

A Strong Start: Valpo captured a pair of wins via shutout on opening weekend with the victories over Grace (3-0) and IUPUI (2-0). It is just the third time in program history the Crusaders have started a season 2-0-0 (2010, 2012).

A Dream Debut: Freshman Lauren Torhorst made her first appearance in a Valpo uniform one she'll always remember against Grace. Called upon as a substitute in the second half, Torhorst was on the field for just 64 seconds before heading home a goal in the 64th minute.

Experience Returns: Among the 18 letterwinners back for the Crusaders in 2017 are eight of last season's 11 most regular starters. The team features plenty of new blood as well, however, as nine players are in their first season at Valpo - seven freshmen and two transfers.

Reaching A Milestone: The Crusaders celebrate a quarter-century of competition this fall, as the 2017 campaign is Valpo's 25th season of intercollegiate women's soccer. The Crusaders first took the field on Sept. 4, 1993 at Michigan State.

Valpo In The Valley: The 2017-18 school year is also a significant season for the Valpo athletics department as a whole, as on July 1, Valparaiso University became a member of the Missouri Valley Conference following a decade of membership in the Horizon League. The move to The Valley dovetails nicely with the soccer program's 25-year celebration, as the MVC is celebrating 25 years of women's competition in the conference as well. The women's soccer team is the only program at Valpo to have previously competed in The Valley, as the Crusaders were an affiliate member of the conference from 1996 through 1998.