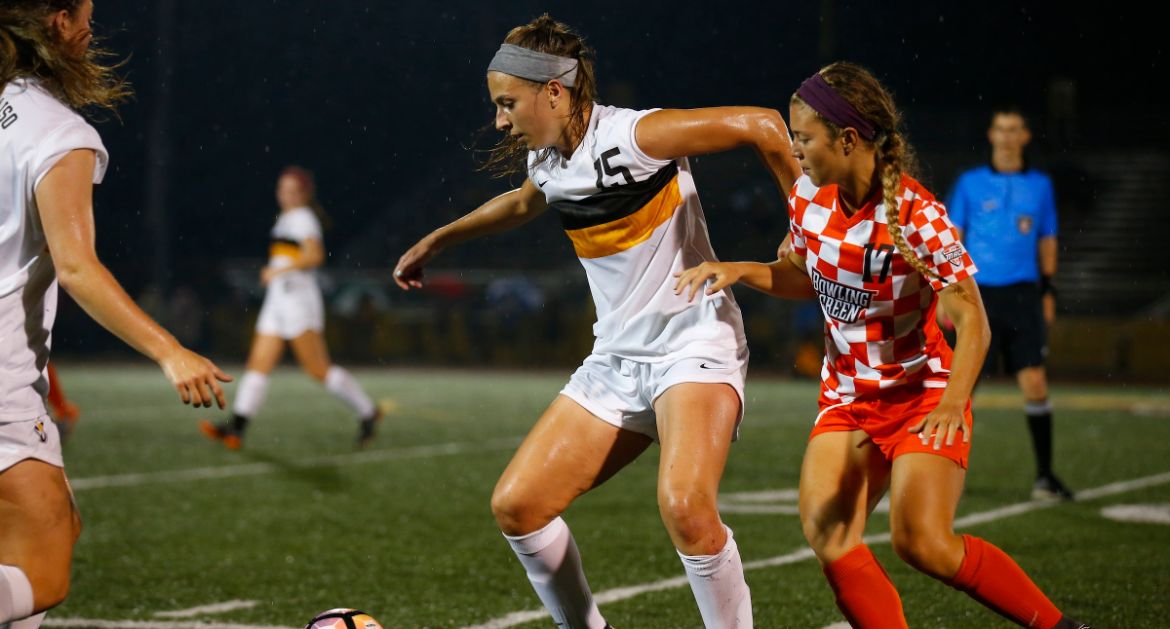 This Week in Valpo Soccer: For the first time in three weekends, the Valparaiso University women's soccer team hits the road, traveling to the Volunteer State for a pair of matchups. Valpo will take on Middle Tennessee State on Friday night before heading to Nashville for a Sunday afternoon fixture at Belmont.

Previously: After Friday's meeting with Bowling Green was cancelled due to severe weather, Valpo senior Cory Griffith lit Brown Field on fire with a record-setting four-goal performance in Sunday's 4-2 victory over Robert Morris (Pa.). Griffith netted a first-half hat trick on the team's Senior Day and scored her fourth in the 48th minute to break the previous program record.

Looking Ahead: Valpo's final match before the start of MVC play comes on Sunday, Sept. 16 with a trip to Indianapolis to face IUPUI.

Following the Brown and Gold: Both matches this weekend will have live video broadcasts - the Friday match at MTSU will be a pay video stream, while Sunday's match at Belmont will be a free stream. Both will have live stats as well, with links for all the live coverage available via ValpoAthletics.com.

Head Coach John Marovich: The 2014 Horizon League Coach of the Year, John Marovich holds an 93-74-28 (.549) record both overall and with Valpo entering his 11th season at the helm of the Brown and Gold. Just the third head coach in program history, Marovich holds Valpo’s all-time records for victories and winning percentage.

Belmont - Valpo owns a 4-1-0 record all-time against the Bruins, including a 1-0 victory on Brown Field last season. Sydney Griffin scored the match's lone goal in the 41st minute, while Kezia Gesell made her first career start in goal and made nine saves to earn the shutout and eventual MVC Defensive Player of the Week honors.

The Record-Setting Performance: Cory Griffith broke Valpo's single-match record by scoring an NCAA D-I season-high four goals in Sunday's win over Robert Morris, carrying Valpo to a 4-2 victory. She scored all four of her goals in a 28-minute stretch spanning the two halves, netting a first-half perfect hat trick before closing out her scoring with a 48th-minute goal. Griffith, who is the only player in Valpo history with multiple hat tricks during her career and also broke the program's single-match record for points, now owns Valpo's career match-winning goals record with 11 and ranks second in program history in career goals (26) and third in career points (58).

Bringing in the Honors: With her record-setting Sunday came a pair of accolades for Griffith. She was named the MVC Offensive Player of the Week - her first weekly award from a league office since being named Horizon League Offensive Player of the Week on Oct. 31, 2016. Griffith was also named to the Top Drawer Soccer National Team of the Week, the first Valpo player to be represented on the 11-player weekly squad since the website’s inception.

Seniors Helping the Senior: Of Valpo's four assists on Griffith's four goals on Sunday, three of them came from her fellow seniors during the Senior Day victory. Sydney Griffin recorded the first multi-assist game of her Valpo career, tallying assists on the second and fourth goals of the game, and now has seven assists in her two seasons in Northwest Indiana. Meanwhile, playing in her 42nd career match in the Brown and Gold, Caitlyn Oliver picked up an assist on the opening goal for her first career point.

Back on the Road: After opening the season 1-0-1 on the first weekend of action away from home, Valpo now returns to the road for its next three matches after a stretch of three straight home matches. The 21 days between home matches for the Crusaders is the longest stretch away from Brown Field this year.

Mother Nature Rears Its Head Again: Valpo's Friday night match with Bowling Green at Brown Field was eventually cancelled due to thunderstorms, following a delay of nearly two hours just 2:29 into the match and then another line of lightning in the 39th minute. Over the last six seasons, Valpo has now had two home matches cancelled due to weather, two others postponed - one of which led to another match having to be cancelled - and three other matches with pregame delays of at least one hour, 45 minutes.

Iron Woman: Only one Valpo player saw more than 75 minutes of action in Sunday's win over Robert Morris, and it should be no surprise who that one player was. Junior Ali Quillen continued her run of consecutive minutes played in the win over the Colonials, going the full 90 as she has now played all 470 minutes for Valpo this year over the season's first five matches. Quillen has now gone the distance in 39 of 43 career matches and is currently on a streak of 1,107 consecutive minutes played.