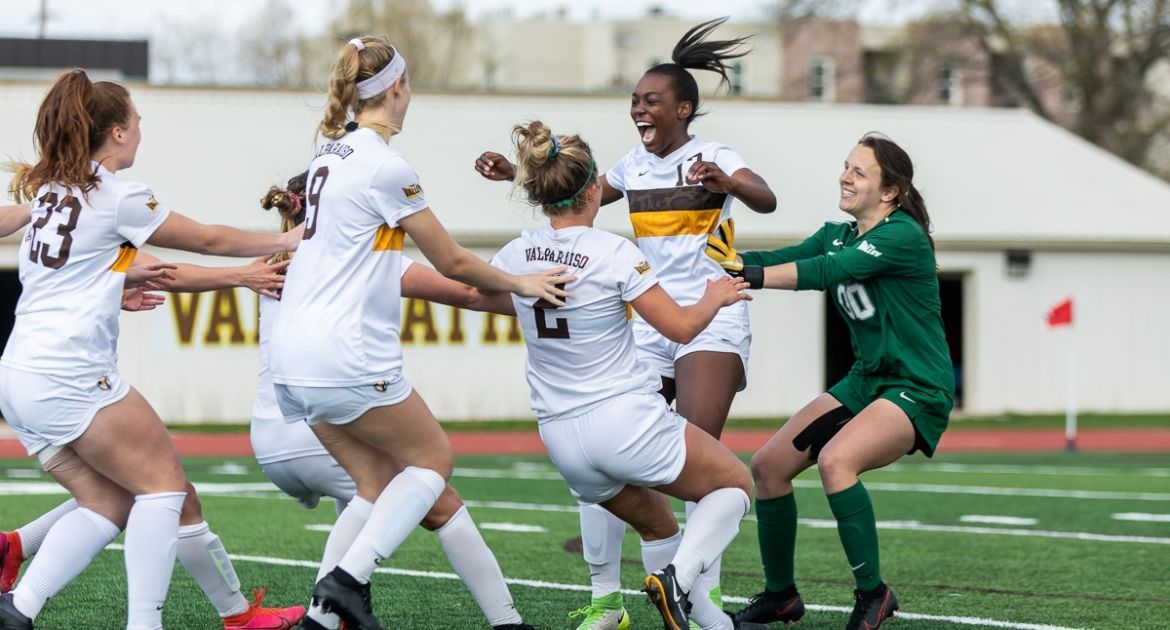 Tahelah Noel celebrates with her teammates after converting the decisive penalty Sunday.
Evansville at Valparaiso | April 11, 2021

After 110 tense minutes of soccer at Brown Field Sunday in first-round MVC Championship action resulted in a scoreless draw, third-seeded Valpo proved it was up to the task in the ensuing penalty-kick tiebreaker, converting all five of its attempts to top sixth-seeded Evansville, 5-3, and advance to the semifinals of the conference tournament.

“We don't look at today's match just as a step in our program's growth, but as taking the opportunity to push the bar higher for the athletic department. We had great fan support today and our athletes got to experience an exciting atmosphere to play in because this was an event, that we had the opportunity to host an MVC Championship game here on our campus. Today was another chance to celebrate the fact we're in the Valley, and we want to try to push that standard forward so that every team, every athlete on our campus gets the chance to experience what our players did today.”

“I felt like the first half was really played in the middle third of the field — it didn't feel like either team had a great sense of control of the match. It took us a bit of time to get into our rhythm. I felt like we had a better handle on the game in the second half — we dealt with winning the ball and keeping it better, and were able to create some more dangerous opportunities.”

“I thought every person who stepped to the line today to take a penalty executed that particular exercise extremely well. Our shots were hard-struck, well-placed, on frame - that was how you would want your team to go out and take PKs, and I'm so proud of how they came through. Then the mental and the emotional piece that goes with it, I felt we managed even better than the physical piece. Everyone was light and positive and lived in the moment.”

Valpo (4-3-5) advances to Wednesday’s MVC Championship semifinal at second-seeded Indiana State. In their meeting earlier this year, the Brown and Gold prevailed 2-0 at Brown Field. Wednesday’s match will kick off at 4 p.m. CT and can be seen live on ESPN+.