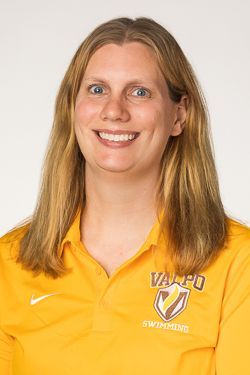 Maggie Kroemer returned to her alma mater as head coach of the Valpo men’s and women’s swimming programs on August 19, 2019. She enters her fourth season in charge in 2022-23.

Kroemer has guided Valpo to new heights in her first three seasons at the helm. Between the two teams, 11 new individual program records and six new relay records have been set since Kroemer's return to Union Street.

The 2021-22 season was highlighted by the performance of the men's squad at the MAC Championships. In their first championship meet as an affiliate member of the MAC, the Beacons broke program records in each of the meet's first four relay events.

The 2020-21 campaign saw Dominic May become Valpo's first conference champion in nearly 20 years, as May touched the wall first in the 200 free at the Summit League Championships. May also joined with Billy Bennett, Adam Chwieros and Brett Little for a 200 free relay performance which earned the quartet All-Summit League honors.

In Kroemer's first season as head coach, the program tallied seven dual meet wins - four by the women and three by the men - to far outpace victory totals in recent years. In addition, both the men (Summit League Championships) and the women (MVC Championships) posted their highest point totals in season-ending competition since moving to their respective conferences. May finished as Summit League runner-up in the 200 free to become Valpo's first All-League honoree since 2006.