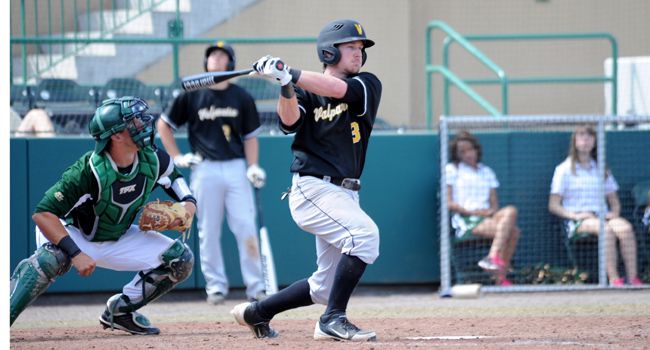 Despite a brisk 25-mph wind blowing straight out at Emory G. Bauer Field, Chris DeBoo and two relievers combined to allow just one hit Saturday afternoon in a 6-2 Valpo victory.

An offense that has been searching for the big hit as of late supplied the pitching staff with a season-high 14 hits including three that went for extra bases.

"We got two big two-out hits in the 8th.  I'm excited with the way we have played the last two days," head coach Tracy Woodson said.

The Crusaders (11-18, 2-6 HL) jumped on top early with two runs in the second inning.  Kyle Schneider singled in Chris Manning who led off the frame with a double to left field.  An infield fly play gone awry added to the Valpo lead.

UIC (14-14, 4-4 HL) got a run back in the visiting half of the 3rd after a bases-loaded walk to Alex Grunenwald plated John Coen.

Valpo added an insurance tally in the 4th inning on an unearned run.

Third baseman Andy Burns bust the game wide open in the 8th inning when he ripped an Alex Posey fastball to left center for his second triple of the afternoon. The gapper scored Manning and Billy Cribbs to give the Crusaders a 6-2 lead.

Ben Mahar earned his second of the season recording the final five outs of the game.

DeBoo (2-5) was credited with his second win of the year.  He struck out seven and did not allow a hit, but the senior did walk a season-high five batters.

The Flames' lone hit was a double off the bat of shortstop Andres Ortegano.

Joey Begel (2-2) threw 7 2/3 innings, yielding eleven hits in the losing effort.  Two of the four runs tagged to him were earned.

The rubber game of the series will be held at 1:00 pm Sunday afternoon at Emory G. Bauer Field.  Kyle Wormington (1-5) will take the hill for Valpo opposite UIC freshman Ian Lewandowski (2-1).