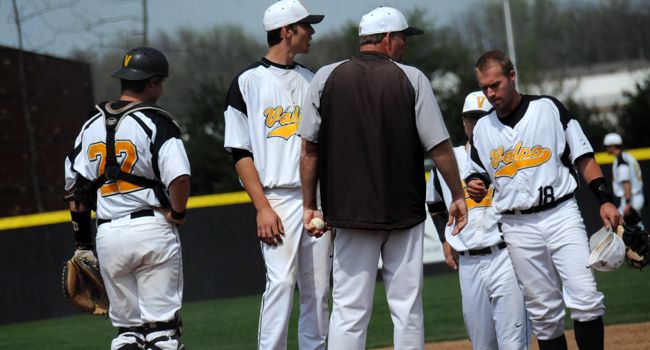 Tanner Vavra, John Loeffler, and Chris Manning each had two-hit games for Valpo, but the Flames out-slugged the Crusaders in a 12-5 loss. (Ray Acevedo)
Valparaiso at UIC | May 11, 2013
Related Links
Related Links

Valparaiso's struggles at Les Miller Field this season continued with a 12-5 loss to UIC Saturday. The Flames were fueled by eight extra-base hits as they hopped into second place in the Horizon League standings by virtue of the head-to-head tiebreaker.

Valpo starter Cole Webb endured a rocky first inning that saw the Flames plate three runs. Leadoff man John Coen worked an eight-pitch at-bat before sending a double to left center. Andres Ortegano followed with a productive ground out to second that advanced Coen to third base with no outs.

Center fielder Tyler Detmer then hit a high chopper to short that brought in Coen from third. After taking a 1-0 lead, the Flames recorded three consecutive doubles to take a 3-0 lead.

Detmer added another RBI to his stat sheet with a sac fly in the second inning to extend the UIC lead a run.

With the bases loaded, Chris Manning hit a ground out to the shortstop to allow Andrew Bain to score from third.

Ian Lewandowski kept the Crusaders stymied at the plate until the sixth inning.

With the cheers from Valpo softball's championship ceremony still reverberating throughout the complex, the Crusaders erupted for four runs in their half of the 6th.

Spencer Mahoney made it a 6-4 game with an RBI single that plated Loeffler.

Lewandowski's last pitch of the day found Elliott Martin's shoulder before he was lifted for reliever Mike Schoolcraft.

Schoolcraft bounced a breaking ball into the dirt that strayed away from catcher Alex Jurich and allowed Mahoney to race home from third to bring the tilt to 6-5.

Joe Betcher, the first batter to the plate for UIC in the sixth, sucked the revived life out of Valpo with an opposite-field solo home run that gave the Flames some breathing room.

The Flames tacked on two runs off reliever Ben Mahar in the home half of the seventh.

The floodgates burst open with a three-run UIC eighth inning. Ryan Boss's third extra-base hit of the game, a two-run double, put the Flames ahead for good 12-5.

UIC's bullpen combined to throw 3 1/3 scoreless innings to preserve the win for Lewandowski (5-3). Conversely, Webb (3-7) suffered his seventh loss of the season in his shortest outing to date as a Crusader.