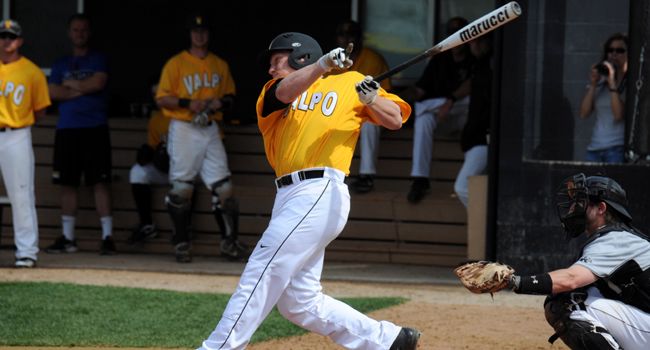 The Crusaders shook off yesterday's offensive hiccup with a definitive 10-3 win over the Jacksonville State Gamecocks Saturday in Alabama.

"Today says a lot about our guys and how they answered after yesterday. I'm extremely proud of them," head coach Brian Schmack said afterwards.

Karch Kowalczyk (Peru, Ill./La Salle-Peru) drove in a career-high five runs with a 3-for-5 day. Spencer Mahoney (La Grange Park, Ill./Lyons Township) also had 3-for-5 afternoon at the dish, scoring three runs out of the leadoff spot.

On the hill, Drew Hasler (South Bend, Ind./Mishawaka Marian) had his best outing yet as a Crusader. The sophomore fired seven innings, yielding one run on seven hits. Hasler both walked and struck out a pair en route to his first win of the season and the second of his career.

Much like they did in last weekend's series at Samford, the Crusaders wasted no time getting runs on the scoreboard. Valpo did all its damage with two outs in the first. Chris Manning (Lake Forest, Calif./El Toro) and Kowalczyk smacked back-to-back singles before a walk to Andy Burns (Edwardsville, Ill./Edwardsville [Heartland CC]) loaded the bases. Michael Morman (Rockford, Ill./Boylan Catholic) put the Crusaders on top with a single to left that scored Manning. Kowalczyk was waved home but was unable to elude Daniel Gaither's tag at the plate for the third out.

Hasler worked around a walk and a hit in the bottom of the first before Valpo tacked on two runs in the following frame.

Hasler kept Jacksonville State scoreless until the bottom of the 4th when Josh Bobo singled in Paschal Petrongolo with two away. Eleven of the next twelve Gamecock batters were retired as the 6'6'' right-hander got into a groove, summoning an assortment of ground ball and fly ball outs.

The first five batters of the inning reached in a top of the 7th where the Crusaders hung four runs on the board. Manning drove in catcher Jake Hanson (Yorkville, Ill./Aurora Christian) who led off the frame with a single through the left side of the infield. Kowalczyk dealt the knockout punch with a bases-loaded double to left. The three-run extra-base hit made it 7-1 Valpo.

Kowalczyk added two more RBIs to his stat sheet in the 8th when he drove in Edwards and Mahoney with a shot up the middle.

Valpo prevailed 10-3 in a game that saw 15 Crusader hits.

The Brown and Gold (3-2) send freshman Mario Losi (0-0, 1.29) to the mound for the series win tomorrow at 1:00 pm CT. Links to the audio and live stats will be available at valpoathletics.com.