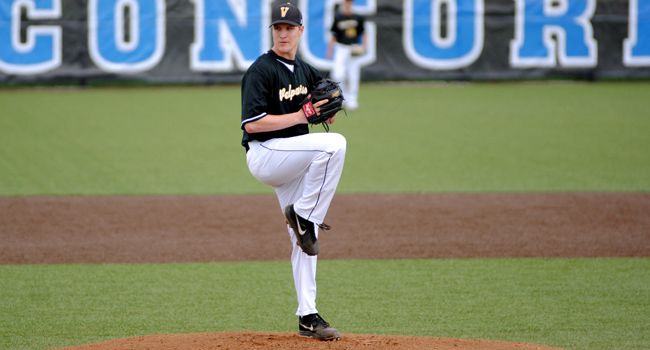 "We've had a number of good arms come through here in my time. Dalton's consistency makes him one of the best," head coach Brian Schmack said.

The Horizon League's Co-Pitcher of the Year kept the Crusaders' season alive as two third-inning runs were all Lundeen and closer Karch Kowalczyk (Peru, Ill./La Salle-Peru), who notched his tenth save of 2014, needed.

The first five batters for Valparaiso reached against Oakland starter Jake Paulson in the third. The bases were loaded with nobody out for Chris Manning (Lake Forest, Calif./El Toro) when the senior drew a walk to force in Mark Johnson (Evanston, Ill./Evanston Township). Johnson got things going with a leadoff single followed by his fifth stolen base of the year. For Manning, the RBI represented the 127th of his career, the sixth-most ever recorded by a Crusader.

Kowalczyk made it 2-0 with a sacrifice fly to right field, plating Jeff Edwards (Massillon, Ohio/Jackson). Edwards' bunt single earlier in the inning loaded the bases for Manning.

Endowed with a two-run cushion, Lundeen sat down the next seven batters Oakland sent to the plate. OU's Zac Sterry advanced to third base on a single to right by Spencer Marentette in the second inning. Sterry was the only Grizzly Lundeen allowed past second base all afternoon.

Brett Impemba singled to kick start the seventh inning, but the designated hitter was stranded there after the next three Oakland batters failed to hit the ball out of the infield against Lundeen.

Lundeen entered the eighth inning at 101 pitches. A six-pitch frame allowed the sophomore to pursue the complete-game shutout. Lundeen retired the first two batters in the ninth. He got ahead 1-2 on Impemba before issuing his second walk of the tilt. His first delivery to the next batter, Tyler Janish, was too far inside, catching the left-hander's elbow.

With the tying run on base, Schmack called on Kowalczyk from the bullpen. Oakland executed a double steal that moved both runners into scoring position before Jake Morton drew a walk to load the bases. The Valpo closer settled down to coax a game-ending ground out off the bat off Ian Yetsko.

Lundeen, who was stuck on three wins for over a month, has now won in consecutive outing for the second time this season. He lowered his already league-leading ERA to 1.94. Only 66 pitchers in the country (starter or reliever) entered play Thursday with an earned run average below 2.00.

With his tenth save, Kowalczyk became the first closer in school history to record back-to-back seasons of 10 or more saves. The 2013 Horizon League Relief Pitcher of the Year has now registered 11 straight scoreless appearances, and has been scored upon just once in his last 16 outings on the mound.

Oakland concludes its first season in the Horizon League at 12-33.

The Crusaders advance to the 11:00 am CT game Thursday morning. Their opponent has yet to be determined. RHP Ellis Foreman (3-6, 5.48) will make the start for Valpo. Foreman is 2-0 with a 1.80 ERA and 19 strikeouts in his last three starts spanning 20 innings. Links to the video and live stats will be available at valpoathletics.com.