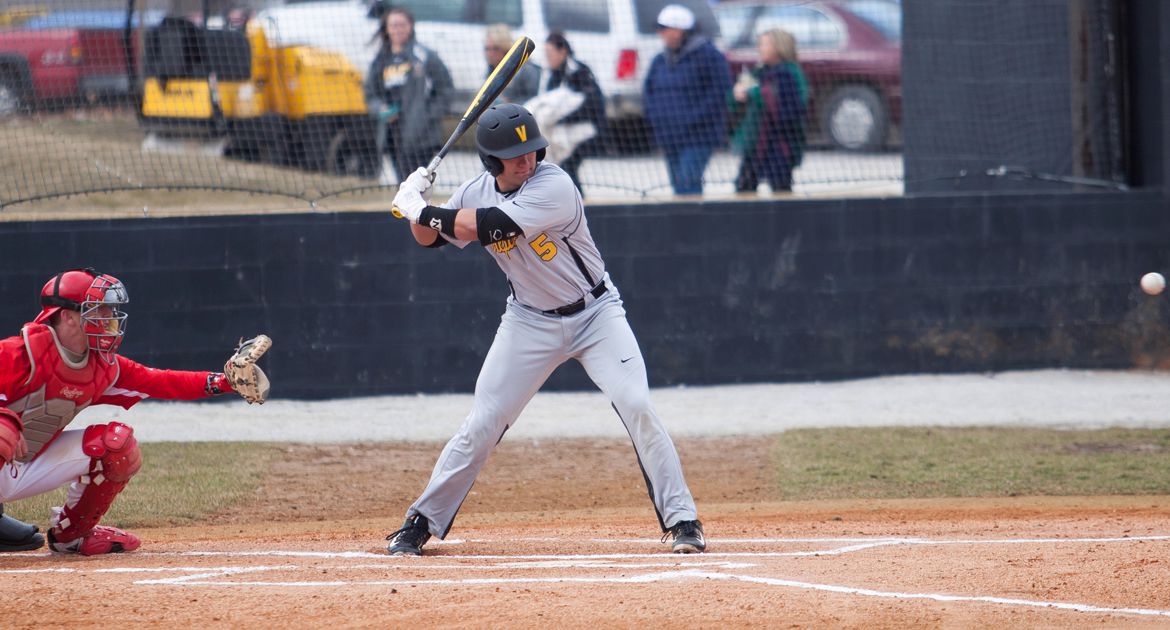 The Crusaders were 4-for-26 with runners in scoring position on the day, but a two-run double from Daniel Delaney (Thousand Oaks, Calif./Thousand Oaks [Fresno State]) and a two-run single by Shea Molitor (Plymouth, Minn./West Lutheran [Des Moines Area CC]) helped the Brown and Gold to a 5-4 win over the Flames in the opening game of a doubleheader at Emory G. Bauer Field. Valpo stranded 14 runners on base in a 4-1 loss to UIC in the nightcap.

Strong starting pitching was the theme for much of Saturday's twinbill.

Thanks to a four-run seventh inning, Valpo claimed a 5-4 win in game one.

Zenon Kolakowski hooked a leadoff double down the right-field line to start things off in the UIC first. After shortstop Cody Bohanek sacrificed him over to third base, Kolakowski touched home on an RBI ground out off the bat of Tyler Detmer.

It stayed a 1-0 game until the Flames tacked on two more runs in the visitor's half of the fourth. Mario Losi (Anaheim, Calif./Canyon) caught Mickey McDonald, the leadoff man, with a 1-2 offspeed pitch. McDonald came around to score two batters later when Alex Lee sent a single up the middle with two men on. Losi was nearly out of the inning with just the one run scored against, but he was unable to snag a comebacker off the bat of Kolakowski, and the ball trickled away far enough for him to beat it out. Conor Philbin scored on the play to make it 3-0.

Losi battled to keep it a three-run game, throwing up three straight zeroes following the fourth. The Crusaders finally snapped a frustrating offensive stretch with runners in scoring position in the seventh inning with a pair of clutch hits from Delaney and Molitor.

Lewandowski retired the leadoff man before yielding a single, a walk, and a hit-by-pitch to load the bases for the Valpo backstop. Delaney brought an end to Valpo's 0-for-9 day with runners in scoring position with a two-run double to left-center. Spencer Mahoney (La Grange Park, Ill./Lyons Township) and Nolan Lodden (West Des Moines, Iowa/West Des Moines Valley [Heartland CC]) came around to score on Delaney's 25th and 26th runs batted in on the season.

Molitor kept the carousel in motion two batters later when he corked a single into left-center off reliever Jack Andersen that put the Crusaders on top 5-3.

Losi exited after seven strong innings. The sophomore allowed three runs - two earned - on eight walks while striking out four and walking two. He gave way to closer Bryce Yoder (Spencerville, Ind./Eastside) who worked the eighth and ninth innings for his fifth save of the season.

UIC made it interesting in the ninth.

Jeff Boehm stroked a two-out single into center that plated the fourth UIC run and cut it to a one-run game. Yoder buckled down, however, and got Philbin to fly out to right field to end the game.

Losi improved to 3-1 with the win while lowering his ERA to 4.73. Valpo beat Lewandowski for just the second time in seven career appearances. He fell to 4-3 on the spring after allowing five runs in 6 1/3 innings.

Behind 6 2/3 innings of shutout ball from starter Trevor Lane, UIC avoided the sweep by virtue of a 4-1 victory in the nightcap.

For the second time Saturday, UIC got out to a lead before the Crusaders came up to bat. Valparaiso starting pitcher Ryan Fritze (Woodbury, Minn./Woodbury [Des Moines Area CC]) issued a walk to Kolakowski, the first batter of the game, before surrendering an infield single to Bohanek. Detmer moved both runners up 90 feet with a sac bunt for the first out. With Boehm at the dish, Fritze unleashed a wild pitch that scored Kolakowski. Later in the at-bat, Boehm sent a grounder to second that scored Bohanek, who had also moved up on the errant delivery. The Flames led 2-0 after their half of the first.

The Crusaders put two on in the first, but stranded both.

UIC added a run in the third via an RBI single from Boehm. Kolakowski, who had reached base by means of a leadoff walk, scored on the hit that gave the Flames a 3-0 advantage.

Fritze and Lane traded zeroes during the middle innings.

After retiring the first two Crusaders in order in the seventh, Lane appeared to be well on his way to notching a seven-inning start. However, Mark Johnson (Evanston, Ill./Evanston Township), Mahoney, and Lodden each recorded singles to the right side of the diamond to load the bases for Nate Palace (Westlake Village, Calif./Oaks Christian). UIC skipper Mike Dee summoned hard-throwing lefty Ryan Hinchley into duty to face the Crusader first baseman. Palace grounded out to second on an 0-1 pitch to end the threat.

The Brown and Gold managed to push a run across in the eighth. Delaney singled to open the frame before advancing to third base following a pair of walks to Molitor and Edwards. Pinch-hitter Giovanni Garbella (San Diego, Calif./Cathedral Catholic) worked a bases-loaded walk to force Delaney in from third. Hinchley got out of the inning a batter later with a strikeout looking of Mahoney.

Two Crusaders reached base in the ninth, but as was the case for much of the game, they were left stranded. Valpo left eight runners on base in its final three at-bats.

Hinchley fired 2 1/3 innings for his sixth save. The senior walked four and struck out four. Lane struck out nine while surrendering seven hits. His record moved to 4-2 with Saturday's win.

Valpo (14-20, 10-7 Horizon) will have six days off before returning to action. Oakland (6-24, 3-13 Horizon) will play host to the Crusaders in a three-game set beginning Friday in Rochester, Michigan. First pitch of Friday's game from Oakland Baseball Field is slated for 3:00 p.m. ET/2:00 p.m. CT. ESPN3 will carry live coverage of all three games. Links to the video and live stats will be available at ValpoAthletics.com.