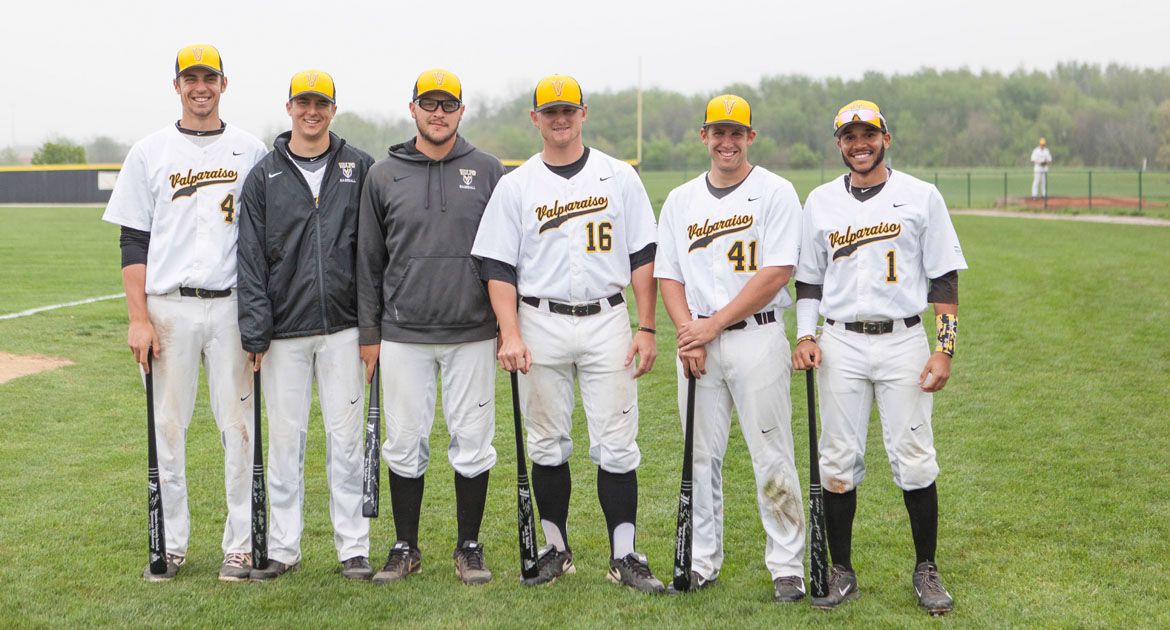 On a day where Valpo honored six graduating seniors, it was only fitting that Kyle Schneider (Mishawaka, Ind./Penn) delivered the game-winning RBI in the Crusaders' 4-3 win to salvage a game of the doubleheader against visiting Youngstown State on Saturday.

The Penguins plated their first run in the top half of the second. First baseman Brent Gillespie led the inning off with a single on the first pitch of the at-bat against Lundeen. Catcher Jonny Miller was called on to lay down a sacrifice bunt, but miscommunication between the Crusader hurler and first baseman Daniel Delaney (Thousand Oaks, Calif./Thousand Oaks [Fresno State]) allowed Miller to reach on a single. Gillespie scooted all the way over to third on the gaffe.

Lundeen made the best of the runners-on-the-corners, no-out situation, summoning a 6-4-3 double-play off the bat of Kevin Hix. However, Gillespie touched home on the twin-killing.

With Alex Larivee on third and Miller on first, the Penguins executed a double-steal that accounted for the first tally of the frame. Hix followed with a liner to right that skipped off the glove of Nolan Lodden (West Des Moines, Iowa/West Des Moines Valley [Heartland CC]) and allowed Miller to trot home from second. Matt Sullivan subsequently cracked a single to left to make give YSU a 4-0 advantage.

The Crusaders recorded two hits in the first, but were utterly flummoxed by King after that. He didn't allow a hit until the seventh. A pair of walks represented his only blemishes during the middle innings.

The Brown and Gold weren't able to break in to the run column until King was in the dugout.

Jeff Edwards (Massillon, Ohio/Jackson) singled home Mark Johnson (Evanston, Ill./Evanston Township), who led off the seventh with a double. A wild pitch and Lodden single later moved Edwards up to third with one out. He came home on a Delaney sac fly to right to cut the deficit to 5-2.

Three runs was as close as Valpo would get, though. A ninth-inning rally was chopped short after a pair of fly outs stranded Schneider and Ray Bartolomucci (Concord, Calif./De La Salle).

Schneider took over as designated hitter in the seventh and rewarded head coach Brian Schmack with two hits in the final three innings. His seventh-inning single represented Valpo's first pinch hit of the season.

Lundeen absorbed the loss for the Crusaders. In seven innings on the hill, he yielded five runs - only two earned - on eight hits. The junior struck out seven and walked just one.

Krokos allowed two runs in relief of King, who improved to 2-1 on the season.

It appeared as though the Penguins were going to spoil Valpo's Senior Day until Valparaiso stood its ground in a two-run sixth in game two.

Youngstown State carried a 2-1 lead to the sixth behind another successful double-steal and a Hix run-scoring single. Delaney's first-inning sac fly attributed to Valpo's first run.

Both teams received stellar outings from their respective starters. Josh North allowed the first three batters of the game to reach before rattling off a string of 17 straight batters retired.

Things went south for North once the Crusader bats were exhumed with two outs in the sixth. Lodden ended North's extended streak of success with a double down the right-field line. Delaney responded with an opposite-field single to tie the game at 2-2.

Armed with his first lead of the afternoon, Mario Losi (Anaheim, Calif./Canyon) worked a scoreless, hitless seventh and eighth innings.

Valpo added an insurance tally in the home half of the eighth thanks to Schneider's second RBI of the game, a single through the right side that allowed Lodden to touch home.

That insurance run proved critical to the Crusaders' 20th win of the season.

Losi started the ninth with the opportunity of seizing his second complete game of the season.

However, Larivee and Josh Fitch had other plans as a leadoff double and walk, respectively, greeted Losi in YSU's last stand.

Bryce Yoder (Spencerville, Ind./Eastside) was called on to nail down the victory with a two-run lead, and two runners on. He retired catcher Jake Fryman on strikes before surrendering an RBI single to Sullivan. The sidewinder escaped with his sixth save of the season after another strikeout and a game-ending ground out.

Losi (5-2) earned his fifth victory of the season after allowing three runs in eight-plus innings. The sophomore fired off 133 pitches, 90 for strikes.