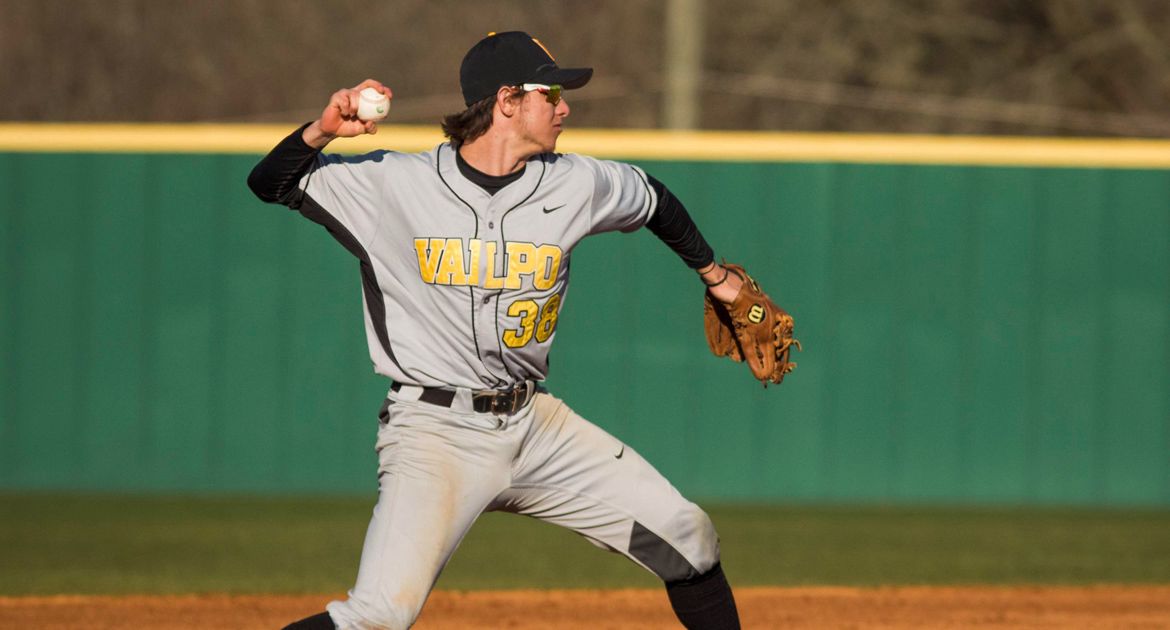 Senior Nolan Lodden (West Des Moines, Iowa/West Des Moines Valley [Heartland CC]) reached base four times in his debut in the leadoff spot of the Valpo batting order, but Wright State scored in each of the last five innings to record a 9-6 series-opening win over the Crusaders Friday afternoon at Emory G. Bauer Field.

A one-run Raider lead ballooned to five by the time the top of the sixth came to a close.

Designated hitter Daniel Arthur's lone hit of the day started things for the Green and Gold in the four-run frame. The next three Raiders got aboard by virtue of two singles and an error. Matt Morrow singled home Arthur before JD Orr sent a two-run single up the middle. Mitch Roman's sacrifice fly plated Morrow to give WSU a five-run cushion.

The Crusaders made a sizable dent in the deficit in the home half of the sixth, getting back three of those runs. Molitor corked a one-out double off Wright State starter Jesse Scholtens that plated Lodden. Lodden, who had worked a leadoff walk, came all the way around from first base on Molitor's fourth double of the season. Two batters later, Chad Jacob (Irvine, Calif./Woodbridge) traded places with Molitor after he cracked an RBI single back up the box and advanced to second when the throw came home. Jacob crossed the plate on the next sequence when Roman couldn't handle a grounder off the bat of pinch-hitter Gio Garbella (San Diego, Calif./Cathedral Catholic).

Ryan Fucci opened the seventh inning with a solo home run to left field. The round-tripper signaled the end of Lundeen's afternoon. Scott Kapers (Schererville, Ind./Mt. Carmel) pushed his RBI streak to three games in the eighth inning with a run-scoring single to right, and Dan Delaney (Thousand Oaks, Calif./Thousand Oaks [Fresno State]) registered a sac fly in the ninth, but Wright State touched up the Crusader bullpen for two runs to secure the 9-6 win.

Valpo (7-12, 3-1 Horizon) and Wright State (14-7, 4-0 Horizon) will conclude its series Saturday with a doubleheader. First pitch from Emory G. Bauer Field will be delivered at 12 pm CT. Game two will begin approximately 30 minutes after the conclusion of the first game. WVUR (95.1 FM, Valparaiso) will have the call while live stats will also be available. Links to both are posted at ValpoAthletics.com.