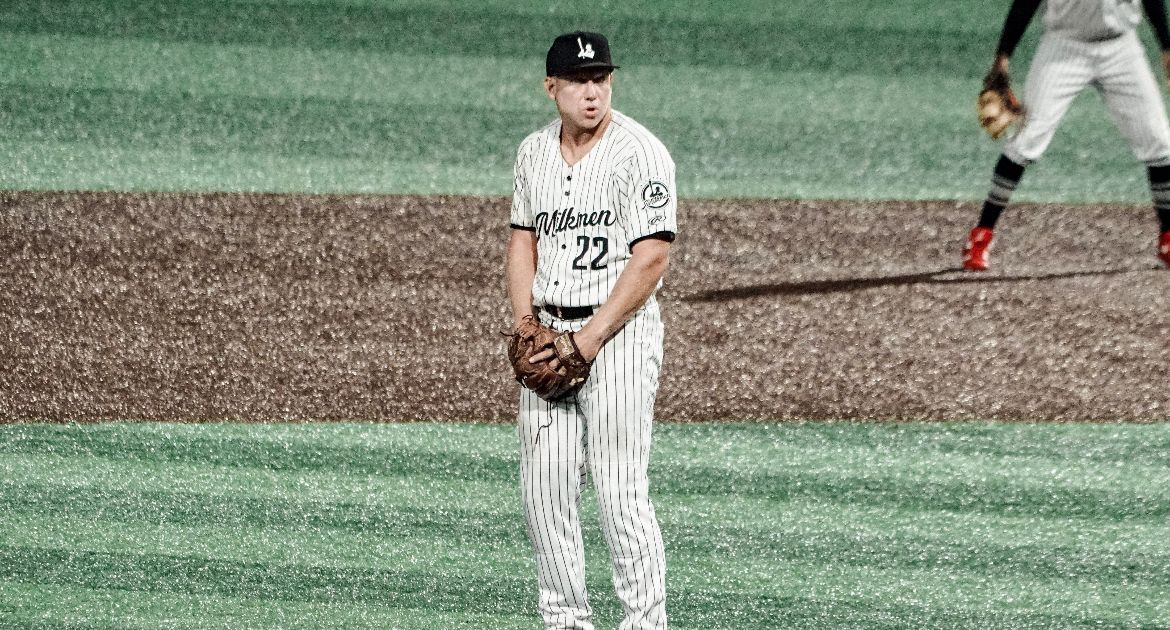 Pitching went from an afterthought to a profession for former Valparaiso University baseball player Karch Kowalczyk during his time on campus.

When Kowalczyk arrived in Northwest Indiana as a freshman in 2009-2010, his focus was on his offense and how he could best develop his skills as a position player. Guidance from pitching coach Brian Schmack, who eventually took over as head coach prior to Kowalczyk’s final collegiate season in 2014, helped Kowalczyk develop on the mound, to the point where it was his right arm that carried him to the professional ranks.

Kowalczyk, who has reached as high as Triple-A in the Los Angeles Dodgers organization, is now in his seventh professional season and is currently a member of the Milwaukee Milkmen of the independent American Association.

“I was more of a hitter coming into Valpo, and pitching was something I did on the side,” he said. “I never met my personal expectations hitting wise, so pitching provided that avenue. Coach Schmack was essential in my development in how I was throwing. I became part of the back end of the bullpen at Valpo, putting me in pressure situations. Because of that, there hasn’t been one time in pro ball where I’ve been overwhelmed by the moment. I still come back and throw at Valpo to get Coach Schmack’s input when I can. My time there was a great experience and something I cherish as I look back on it with friends and family.”

Kowalczyk is in his second season in the American Association and owns a 3.63 ERA over 22 relief appearances with the Milkmen. Last season, he went 3-1 with a 3.21 ERA with the St. Paul Saints. The Milkmen and Saints made a trade during the 2019 season that involved a player to be named later, and at season’s end, Milwaukee acquired Kowalczyk’s rights to complete that deal. The Milkmen are one of six of the league’s 12 teams participating in the 2020 campaign with the other clubs shut down due to COVID-19.

“I’m fortunate to be playing because so many players I know don’t have a chance to play right now because their seasons were cancelled,” Kowalczyk said. “When we first started, we were the first ones to have a game. You train the whole offseason for this opportunity, so the fact that we were able to keep the season going was significant. We put in all the work to get on the field, and now we have a chance to see that pay off.”

After earning the 2013 Horizon League Relief Pitcher of the Year award thanks to 12 saves and an 0.36 regular-season ERA, Kowalczyk returned for his final collegiate season in 2014 and collected 11 saves to go along with a 1.59 ERA. He was scored upon just once in his final 17 appearances and graduated with a double major in biology and chemistry before being selected by the Dodgers in the 37th round of the 2014 Major League Baseball First Year Player Draft.

The Peru, Ill. native and La Salle-Peru graduate spent his first five professional seasons in the Dodgers system, reaching as high as Triple-A Oklahoma City in 2018. He appeared in 66 games at the Double-A level with the Tulsa Drillers over two seasons, earning the promotion to Oklahoma City for one game at Triple-A, one step from the big leagues.

“I was there with the team for about two weeks and threw in the one game,” Kowalczyk said. “The previous year in 2017, I did really well and so did our whole bullpen. The Dodgers system is talented, so there is a logjam. I was banged up in 2018 but had some good moments, so the opportunity presented itself to go up to Triple-A right after I had come off the injured list. I felt good out there and I know I’ve made it to that level, so it motivates me to keep grinding and see if I can get there again.”

A multitude of coaches have influenced Kowalczyk’s career, including Bill Haselman, who played in the big leagues from 1990-2003 and has served on the Boston Red Sox big league coaching staff as a bullpen coach and first base coach. Haselman managed Kowalczyk when he was with the Rancho Cucamonga Quakes (Class-A Advanced) and for the one game with the Oklahoma City Dodgers. Other influential coaches include Double-A manager Scott Hennessey, and former big-league pitcher Aaron Sele, who was a roving instructor in the Dodgers organization and is currently a special assignment scout for the Chicago Cubs.

At the age of 29, Kowalczyk has reached an interesting crossroads in his career. Retiring and moving on to a post-baseball life is on his radar, but his strong preference is continuing to perform at a level that would allow his playing career to extend beyond this season.

“I feel great; I feel like I have my best stuff out of all the years,” Kowalczyk said. “I had some good velocity early on with the Dodgers, but it dropped a little bit in 2018. I’ve been focusing on getting that back to the upper 90s, and I’ve done that. I’ve thrown back-to-back games three times this year, and I can’t recall doing that more than once or twice in my career with the Dodgers. My arm is the healthiest it’s been in a long time, and I feel super athletic out there. I never had an expectation that I’d still be doing this and be able to perform at this level seven years later, so I’ve been lucky in that regard. I’m taking it day-by-day and enjoying the experience.”