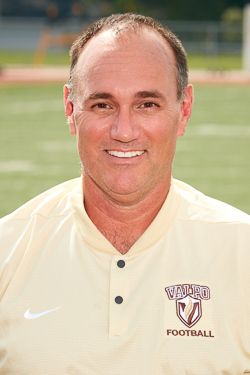 John Snyder is back for his sixth season in his second stint as an assistant coach with the Crusader football program in 2018. He currently serves as the team's special teams coordinator and also works with Valpo's tight ends.

Snyder has been seen the program go through a tremendous turnaround, leading up to its first winning season since 2003 in 2017. On special teams, he has coached return specialist Bailey Gessinger, who was named to the all-PFL second-team in both 2016 and 2017. Snyder has also instructed kicker Dimitrios Latsonas, who made 11 field goals in 2017, tying for fourth in single-season program history, and shattered the program record with 35 PAT conversions.

Snyder was the position coach for 2017 graduate Jarrett Morgan, who was a three-time all-PFL honorable mention honoree and a three-time academic all-PFL second-team member during his career as a Valpo running back. Snyder led a Valpo running game that finished with 20 rushing touchdowns in 2017, the program's most since 2000 and tied for fifth most in program history.

Snyder spent 18 seasons at Chesterton High School, serving six years as an assistant coach before taking the reins as the program's head coach for 12 seasons prior to his return to Valpo. During his tenure as head coach, the Trojans won 74 games, including three Duneland Athletic Conference titles.

Prior to his tenure at Chesterton, Snyder spent one year as head coach at Paoli High School and three years as an assistant coach at Valparaiso High School. Snyder was a member of the Valparaiso University coaching staff prior to that from 1989 through 1991, serving as offensive coordinator and working with the wide receivers and punters. He also spent time on the coaching staff at Iowa Wesleyan College and Winfield-Mt. Union (Iowa) High School.

Snyder is a 1987 graduate of Iowa Wesleyan College with a bachelor's degree in physical education and health. He was a four-year letter winner on the gridiron at Iowa Wesleyan, where he played quarterback, wide receiver and punter. Snyder went on to earn his master's of education from Valparaiso University in 1991.