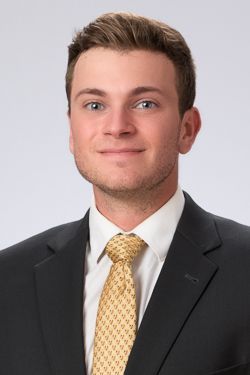 2018-19: Averaged a 77.46 over 28 rounds as a sophomore… His season low round came in the first event of the year when he carded a 72 (E) in the final round of the Turning Stone Tiger Intercollegiate on Sept. 5… Cracked the starting lineup for the MVC Championship on April 22-23 and finished tied for 29th at 223, his best 54-hole score of the season.

2017-18: Burst onto the scene as a freshman, finishing in a three-way tie for the team lead in scoring average at 76.33… Made an immediate impact in his Crusader debut, tying for the team lead with a 228 (t-7th) at the Crusader Collegiate after an even-par of 72 in Round 3… Carded a 65 in the first round of the SIUE Derek Dolenc Invitational on Sept. 25, tying the program record for 18-hole round score. Went six strokes under par in that round, tied for third in program history in 18-hole round low in relation to par… Finished the SIUE event with a 54-hole score of 211, which is tied for fifth in program history. He went two strokes under par, tied for seventh all-time. He finished fifth of 96 in the event, one of two Top 5 finishes by a Crusader in 2017-18… Had his second round under par on Feb. 18 in the third round of the Invitational at Savannah Harbor, posting a 71… Competed in Valpo’s first Missouri Valley Conference Championship.

Prep: A five-year varsity letter winner after beginning his varsity career as an eighth grader... Played two years at Longwood Junior High School in New York before transferring to Hamilton Southeastern High School in Indiana... While at Longwood Junior HS, he was all-county in 2014, all-league in 2013 and 2014, received a Scholar Athlete Award in 2014 and was Pine Ridge GC Men’s Club Champion in 2013... At Hamilton Southeastern, notched all-county recognition in 2015-16 and all-conference in 2015... Had two Top 25 individual finishes in the Indiana High School state championship, was a two-time College Prep Series winner at Purdue HGJT and helped his team to two top-five state finishes... In 2015, his team won sectional and regional championships in the same season for the first time in program history... Member of Academy of Finance, a nationally-accredited program that provides internships and specialized classes focused on business and finance... Had a 3.94 cumulative high school grade point average.