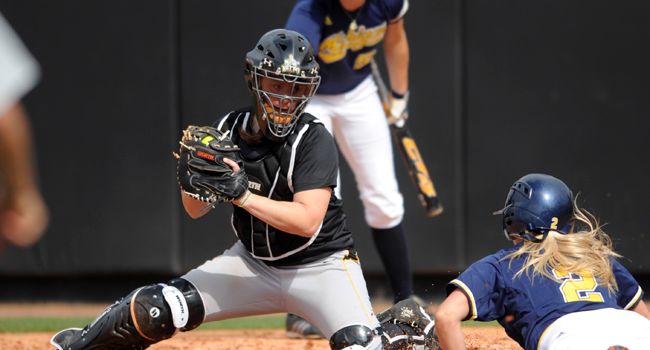 The Valparaiso softball team split a pair of games on the opening day of action at the Frost Classic in Chattanooga, Tenn., defeating East Tennessee State in eight innings, 4-2, before falling to host UT-Chattanooga, 7-0.

The Crusaders got on the board first in the opener against ETSU, striking for two runs in the top of the third inning.  Freshman Lindsey Norway (Chicago, Ill./Chicago Christian) led off the frame with a single, and two batters later, senior Sara Strickland (Scottsdale, Ariz./Horizon) knocked out a double, with Norway coming all the way around to score on an error by the Bucs.  Two batters later, senior Jordan Rutkowski (Alden, N.Y./Alden) helped Strickland complete the circuit of the bases with a two-bagger of her own, making it 2-0 Valpo.

ETSU would score a single run in the fourth and fifth innings to knot the score up at two apiece, however.  The Bucs cut the deficit in half with a Casey Horner solo homer in the fourth, and then received a two-out RBI single by Annie Martin in the fifth to make it two-all.  ETSU had a runner on third with two outs in the seventh, but could not push across the winning tally, as the game went into extra innings.

Playing under international tiebreak rules, where a runner is placed on second with nobody out to start the eighth inning, Norway started the frame at second base, but was still stuck there three batters later after two outs and a Strickland hit-by-pitch.  But a passed ball, exacerbated by a throwing error by the ETSU catcher, allowed Norway to score and Strickland to advance to third, where she came home on a Rutkowski RBI single for the final margin.  The Bucs loaded the bases with two outs in their half of the eighth, but senior Sam McGee (Bloomington, Minn./Jefferson) induced a fly-out to secure the win.

McGee improved to 2-1 with the complete-game win, scattering seven hits over her eight innings of work while striking out six.  Relief pitcher Katie Wolff took the loss for East Tennessee State (1-8), surrendering the two eighth-inning runs.  Rutkowski led the Crusaders, going 3-for-4 with two RBIs on the game.

“It took a bit for us to get going against East Tennessee State, but we battled through for a win,” said Crusader head coach Jordan Stevens.  “We got a big baserunning play and a key hit in the eighth inning to propel us to victory.”

The nightcap would not be as kind to Valpo, as the Crusaders managed just four hits.  Valpo placed just one runner in scoring position in the loss to UT-Chattanooga, as Strickland doubled with two outs in the first but was stranded.  Meanwhile, the Mocs scored three apiece in the first and second innings to take an early 6-0 lead and cruise to the win.  Senior Alex Lagesse (Beecher, Ill./Beecher) took the loss for Valpo, falling to 2-1 after starting and giving up three runs while recording just one out, while Michelle Fuzzard earned the shutout for UT-Chattanooga (5-4).

“We actually hit the ball better in the second game, but they didn’t fall in,” said Stevens.  “We helped Chattanooga a lot by putting too many runners on base via walk and error in front of their key hitters, and they made us pay.”

Valparaiso (4-2) returns to action on Saturday with two more games at the Frost Classic.  Valpo will face UT-Martin at 12:15 p.m. CST and turn right around to take on Niagara at 2:30 p.m.  Live stats for both games will be available through www.valpoathletics.com.