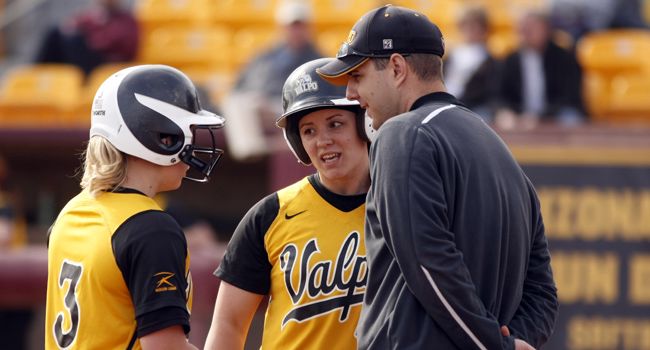 Next Up in Crusader Softball: Valparaiso returns to the Midwest this week with its earliest home opener in program history, hosting a doubleheader on-campus at the Valparaiso University Softball Field on Tuesday against IUPUI at 3 p.m.  The Crusaders then open the Horizon League slate this weekend with a three-game series over two days at Detroit.

Previously: Valpo closed out its spring break trip with what was scheduled to be five games over three days at the San Diego Classic II in San Diego, Calif.  The Crusaders opened tournament play with a 10-2 run-rule victory over CSU Bakersfield before dropping a 1-0 decision to San Diego.  But then the Crusaders’ last three games on Saturday and Sunday got canceled due to inclement weather.

Following the Crusaders: Live stats for all five of this week’s games will be available through www.valpoathletics.com.  In addition, WVUR (95.1 FM, Valparaiso) will kick off its spring 2012 broadcast schedule as it carries the Crusaders’ home doubleheader with IUPUI on Tuesday, with the audio webcast also available online.

Head Coach Jordan Stevens: Jordan Stevens is in his second season at the helm of the Valparaiso University softball program in 2012 after leading the Crusaders to a successful season in his first year in charge in 2011.  Stevens, who now owns a record of 46-30-1 at the helm of the Crusaders, guided Valpo to 34 victories in his debut campaign, just one win shy of the program's single-season record.  Valpo finished Horizon League play with a 15-7 record, finishing just one-half game out of the regular season championship, and was within one run of advancing to the league tournament championship.

Series Notes: IUPUI - Valpo holds a 29-23 advantage in the all-time series over the Jaguars, most recently sweeping a twinbill in Indianapolis on March 22, 2011 by scores of 10-3 and 9-1.  Both of the Crusaders’ starting pitchers have been successful over the years against IUPUI, as Alex Lagesse and Sam McGee have combined to go 4-0 with a 0.84 ERA in their four starts against the Jaguars.  Offensively, Sara Strickland has gone 10-for-21 with six runs scored and eight steals over her career against IUPUI, while Angie Doerffler went 5-for-9 with four runs scored last season.
Detroit - Valpo improved its all-time record against Detroit to 23-17 last year with a three-game home sweep, downing the Titans by scores of 8-0 (Alex Lagesse perfect game), 10-0 and 7-1 on March 26-27, 2011.  The Crusaders are now an impressive 11-1 against the Titans since joining the Horizon League.  Lagesse has never given up a run to the Titans in 20 innings pitched against them.  Offensively, Kelsey Phalen is 12-for-24 (.500) in her career with five doubles, nine RBIs and seven runs scored versus Detroit, while Joylyn Ichiyama-Drewry is 8-for-17 (.471) and Strickland 14-for-30 (.467) with 14 runs scored and seven doubles.

Rain, Really?: Valpo suffered its first weather-related game casualties of the season last weekend in San Diego of all places, as three games over a two-day span were canceled due to inclement weather.  The lost games in California came despite having record-high temperatures and abundant sunshine back home in Valpo in mid-March.  Last year, the Crusaders didn’t have a game canceled until April 16 and eventually ended the year with four lost games.

Earliest Home Opener: With a projected high temperature of 84 degrees and mostly sunny skies, the Crusaders couldn’t have picked a better year to host their earliest home game in program history.  Valpo will play at home on March 20 for the first time ever, as the previous earliest home game came on March 21, 2009 when the Crusaders hosted an HL twinbill against Detroit.

Snapping the Losing Streak: While the Crusaders got just two games in out in San Diego last weekend, they were able to win their opener against CSU Bakersfield to break a season-long five-game losing streak.  Valpo, which lost all five games at the Diamond Devil Invitational against tough competition, hadn’t had a losing streak that long since falling in six consecutive games from May 3-6, 2007.

Winning by Run Rule: The Crusaders’ win over CSU Bakersfield came via the run rule, as Valpo scored five runs in the sixth inning to go up 10-2 and end the game.  The victory was the third this season by run rule for Valpo, which has yet to be on the wrong end of a shortened victory.  Last season, the Crusaders won eight games by run rule (three of which came versus this week’s opponents) and lost three times.

League Honorees: Through five weekends of play, the Crusaders already have tallied five Horizon League weekly award winners.  Most recently, redshirt sophomore Jessie Marinec received her second career Player of the Week honor on March 13.  Senior Jordan Rutkowski has twice been named Player of the Week this year, while freshman Brittany Duncan was named the Player of the Week and senior Alex Lagesse Pitcher of the Week (her sixth career award, fifth-most in league history) after the season’s opening weekend.

Among the Nation’s Best: While the Crusaders played just two games last weekend, senior Jordan Rutkowski continued her season-long tear at the plate, going 2-for-4 with a home run and three RBIs over the two games.  The latest national stat rankings are not yet out, but Rutkowski should be maintaining her spot among the nation’s top-30 in slugging percentage (1.000), batting average (.492), RBIs/game (1.24), home runs/game (0.38) and doubles/game (0.38).

Taking an Unfamiliar Route: Marinec entered the week of the Diamond Devil Invitational having hit just four career home runs, but matched that total during an 8-for-19, 6 R, 5 RBI week that earned her HL Player of the Week honors.  Marinec’s four round-trippers came in four different games, including three consecutive.  One of the home runs came against #5 Arizona State, the second time in her career the redshirt sophomore has gone yard against a top-five opponent (Florida).

Freshmen Produce: The Crusaders’ pair of freshmen regular starters both produced well in Valpo’s two games last weekend.  Brittany Duncan went 2-for-3 with two doubles, two RBIs and three walks over the pair of contests, giving her a slash line of .310/.394/.517 so far in her rookie year.  Meanwhile, Lindsey Norway went 3-for-5 with a pair of walks and two runs scored atop the Crusader lineup and has now tallied hits in five of her last six games.

Shutting Down Opponents: Senior Alex Lagesse has quietly been a steady influence in the circle so far this season for the Crusaders.  In 16 appearances on the rubber, Lagesse has surrendered more than three earned runs on just one occasion and enters this week with a 2.66 ERA and 47 strikeouts in 65.2 innings of work.  The senior fell to 5-5 last time out despite one of her best efforts of the season against San Diego, surrendering just one run on four hits in a 1-0 loss.