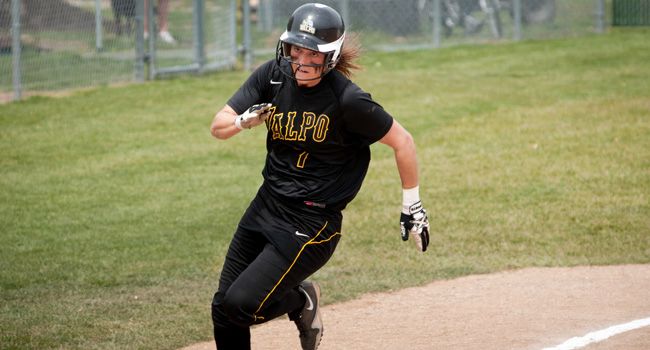 Next Up in Crusader Softball: Valparaiso closes the regular season this week with a chance to secure the outright Horizon League title with a three-game series at Cleveland State.  The Crusaders have already clinched at least a share of the regular season championship, and need to win just one of three against the Vikings for the outright title.  The home slate concludes earlier in the week as Valpo hosts Western Michigan for a non-league twinbill on Wednesday afternoon.

Previously: Valpo went just 3-3 last week, but the last victory, which came on Senior Day against Loyola by a 2-0 count, was enough to secure a share of the league’s regular season title.  The Crusaders started the week going 2-1 against Butler, sweeping a doubleheader by scores of 9-1 and 5-1 before falling the next day, 5-4.  The Ramblers then came in and took both games on Saturday (3-2, 4-1) before Valpo took the series finale.

Following the Crusaders: Valpo’s campus radio station, WVUR (95.1 FM), will be broadcasting Wednesday’s Western Michigan doubleheader live over its airwaves, with the webcast also available at www.valpoathletics.com.  Live stats for all five games this week will also be available through www.valpoathletics.com, as well as live chats for the entire CSU series.

Head Coach Jordan Stevens: Jordan Stevens is in his second season at the helm of the Valparaiso University softball program in 2012 after leading the Crusaders to a successful season in his first year in charge in 2011.  Stevens, who now owns a record of 66-37-1 at the helm of the Crusaders, guided Valpo to 34 victories in his debut campaign, just one win shy of the program's single-season record.  Valpo finished Horizon League play with a 15-7 record, finishing just one-half game out of the regular season championship, and was within one run of advancing to the league tournament championship.

Series Notes: Western Michigan - The Crusaders trail the all-time series against the Broncos 17-2, but the two squads have not met since 2003.  That season saw WMU earn a 4-1 home win over Valpo in the first game of a scheduled doubleheader, but the second game was rained out.
Cleveland State - Valpo is just 8-15 all-time against the Vikings and just 4-8 versus Cleveland State since joining the Horizon League, but three of the Crusaders’ victories came last year, as Valpo swept a pair of regular season games from CSU and also knocked the Vikings out of the Horizon League Championship.  Pitchers Alex Lagesse and Sam McGee combined to surrender just three runs to the Vikings in the three victories last season.

For the First Time: The Crusaders’ win over Loyola on Sunday, combined with UIC’s split in a doubleheader that day, guaranteed Valpo at least a share of the Horizon League regular season championship, the first league title in program history.  Valpo actually twice previously came up just short of a regular season Horizon League crown, missing out on the title in 2008 after losing to Cleveland State in the season’s final game and then falling just one-half game short of Loyola for the title last season.

And With a Win...: Entering the week, Valpo’s closest competitor (Loyola) was three full games back with both squads having just three games remaining, meaning the Crusaders need to win just one game this weekend against CSU or have Loyola lose one to Detroit to secure the outright regular season title.  With the outright title, the Crusaders would also earn the right to host the 2012 Horizon League Championship next week (May 9-12) on campus as the #1 seed.

Wins Mark Within Reach: Winning the outright regular season Horizon League title isn’t the only milestone that could be reached this week by the Crusaders.  Valpo enters the five-game week with 32 victories in 2012, the third-most in a single season in school history.  The only squads which won more were the 2011 (34) and 2010 (35) teams, which means the Crusaders will match the program record for wins in a season with three wins this week and break it with four victories.

Other Records: This year’s Crusader squad has already started to re-write the team single-season record book, breaking the marks for runs scored and RBIs in a season last week.  Other counting records that could be in danger this week include home runs (47, record 49), doubles (78, record 88) and walks (149, record 162).  Also, the team’s current slugging and on-base percentages would be the best single-season marks in program history, while the fielding percentage would be just a fraction behind the record.

Historic League Start: While the Crusaders finally dropped a Horizon League game in the nightcap of a doubleheader at UIC, it halted one of the best starts ever in league play by a softball team.  Valpo won each of its first four league series by sweeping all three contests and then took the series opener against the Flames for a 13-0 start, the second-best start in league play ever by a Horizon League program.  Only the 1997 UIC squad, which went 14-0 in Horizon League action, won more consecutive games to start off the league season.

Double-Digit Winning Streak: The Crusaders’ loss to Notre Dame in non-league action on April 18 snapped just the second double-digit winning streak in program history.  Valpo carried an 11-game winning streak prior to the loss against the Fighting Irish, trailing just the 2011 squad, which won 13 straight at one point, for the longest winning streak all-time.  The Crusaders, who went nearly three full weeks between losses, won nine of their 11 during this winning streak within Horizon League play, as opposed to the record streak, in which just three of the 13 games were league contests.

Record Rally: Given that the first game of the Saturday doubleheader against YSU April 14 was a 4-3 decision, nobody could have seen coming what happened in the nightcap.  The Penguins torched Valpo for 11 first-inning runs and added another tally in the second to go up 12-0 through two frames.  But that only set the stage for the largest come-from-behind win in Crusader softball history and what is believed to be the largest comeback in NCAA Division I softball this season.  Valpo scored four in the third, three in the fourth and four in the fifth to cut the deficit to just one run before scoring one in the sixth to tie it and getting a walkoff single in the seventh for the 13-12 win.  The 12 runs also marks the most Valpo has ever surrendered in a victory.

Home Field Advantage: Despite splitting six home games last week, Valpo still owns a solid home field advantage at the Valparaiso University Softball Field.  With the home regular season slate coming to a close against Western Michigan on Wednesday, the Crusaders own an 11-4 home record this season.  Over the last three seasons, Valpo owns an impressive 33-8-1 record at home, including a 26-6 record in Horizon League play.

Winning by Run Rule: The Crusaders won the first game of the series against Butler on Wednesday 9-1 in five innings, their eighth victory via run rule this season.  Valpo still has yet to be on the wrong end of a shortened victory in 2012.  Last season, the Crusaders won eight games by run rule and lost three times.  Since joining the Horizon League, Valpo boasts a 21-3 record in league games shortened via run rule.

National Player of the Year Finalist: Senior catcher Jordan Rutkowski was one of just 25 softball players nationwide on the Finalist list for the 2012 USA Softball Collegiate Player of the Year honor, which came out three weeks ago.  Rutkowski is the only Horizon League player on the list, which is dominated by players from major college programs.  Rutkowski leads the league by far in RBIs (52), ranks second in doubles, home runs and total bases; third in runs scored; fourth in on-base percentage and hits; and fifth in batting average.

Sterling Rookie Season: Freshman Brittany Duncan is making her case not only to be named the Horizon League Newcomer of the Year, but to earn a spot on the league’s First Team.  Duncan continued her strong rookie campaign by driving in seven of Valpo’s 23 runs last week over six games.  The Crusaders’ cleanup hitter ranks among the top-seven in the Horizon League and leads all league freshmen in batting average (.373), on-base percentage (.462), slugging percentage (.619), doubles (12), home runs (7) and RBIs (41), ranking second in the latter category behind only Rutkowski.  She has especially stood out within Horizon League play, where she ranks second in the league with a .441batting average through seven league series, is also second in on-base percentage (.534) and slugging percentage (.746) and is tied for the league lead with 24 RBIs.

Excelling On Both Sides: Senior Joylyn Ichiyama-Drewry has returned after a redshirt year in 2011 and been impressive both offensively and defensively for the Crusaders this year.  Overall, Ichiyama-Drewry is hitting .329 with 37 RBIs on the season, ranking fourth in the league.  24 of her 37 driven in have come in league play, tying her with Duncan for the top spot.  Defensively, Ichiyama-Drewry has been a stalwart at third base, leading the Horizon League with 143 assists this year.

Lagesse Continues Strong Campaign: Senior Alex Lagesse had another strong week in the circle last week, going 2-1 over four starts while posting a 1.42 ERA.  Lagesse allowed just two hits and one run in a series-opening victory against Butler on Wednesday.  She then took a tough-luck loss in the opener versus Loyola Saturday, giving up just one earned run and two hits while striking out 10 batters.  Then on Sunday, she put together one of the best games of her career, giving up just three hits and walking none while striking out a career-best 11 batters in the 2-0 win over the Ramblers.  On the season, Lagesse is 15-8 with a 2.27 ERA, second-best in the Horizon League.

Jansen in Relief: Senior Shaleigh Jansen pitched five innings of shutout softball in the middle game of the three-game series against Loyola, continuing her solid performance in Horizon League play this season.  Jansen has made seven appearances out of the bullpen in league play and is 3-1 with a 1.75 ERA in 20 innings of work.  She has struck out 14 batters while limiting opponents to just a .197 batting average in Horizon League action.