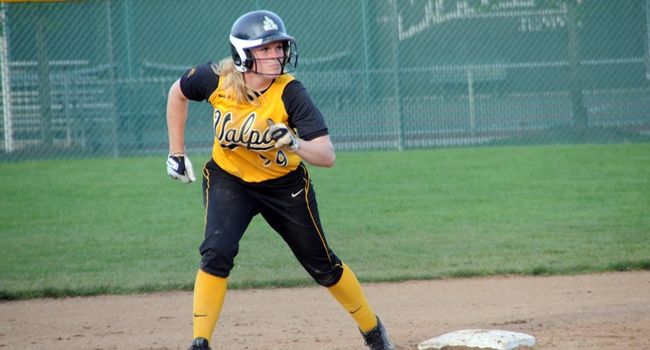 Valparaiso closed out the non-league portion of the regular season, as well as the home slate at the Valparaiso University Softball Field, with a sweep of a doubleheader from Western Michigan on Wednesday afternoon, defeating the Broncos 2-0 in the opener and 3-2 in the nightcap.

“We got to see some really good pitching today,” said Crusader head coach Jordan Stevens.   “Western Michigan is a good ball club and they challenged us.  I thought it was important going into our last weekend of the regular season that we played some stiff competition and got more at-bats against good pitching.  We actually got to do some things today situationally that we haven't been able to in some time.  It just worked out well for us to get a good team in here and help us prepare for Cleveland State.”

The opener set out from the start as a pitcher’s duel between Valpo senior Alex Lagesse (Beecher, Ill./Beecher) and WMU starter Meredith Whitney.  Neither pitcher would allow a runner past second base through the first four innings as both pitchers kept putting matching zeroes on the scoreboard.  The first big threat on either side came in WMU’s half of the fifth, as the Broncos used an infield single, a one-out single and a stolen base to put runners on second and third with two away.  But Lagesse picked up a pair of strikeouts, one looking and one swinging, to escape the threat and keep the game scoreless.

The next inning would bring another jam for Lagesse and the Crusaders, as Western Michigan’s first two hitters of the sixth picked up a single and then a double to put two runners in scoring position with nobody out.  Lagesse picked up a huge strikeout to get the first out of the inning, but then hit the next batter to load the bases with one away.  The bases loaded set up a force at any base, however, and on a grounder to short, sophomore Angie Doerffler (Fort Wayne, Ind./Concordia Lutheran) came home for the force to keep the Broncos off the scoreboard.  Another groundout ended the top of the sixth with no runs crossing the plate.

Valpo would put together two of its four hits of the game back-to-back in the sixth to account for the game’s only runs.  Redshirt sophomore Jessie Marinec (Alsip, Ill./Marist) worked a full count before sending a sharp grounder up the middle, just right of the second-base bag, for a leadoff single.  Freshman Brittany Duncan (Fairborn, Ohio/Fairborn) stepped in and drilled the first pitch she saw to straight-away center for a two-run homer, her eighth round-tripper of the season.  Lagesse made the two runs stand up, retiring the side in order in the top of the seventh for the win.

Lagesse improved to 16-8 on the season, picking up her second straight complete-game shutout.  The senior scattered seven hits and struck out seven WMU batters while walking none.  Whitney took the complete-game loss for the Broncos, falling to 15-12.  Both Marinec and senior Kelsey Phalen (Batavia, Ill./Batavia) reached base twice in the opener for Valpo.

The second game was practically the antithesis of the first for the Crusader offense, as Valpo tallied 11 hits and drew eight walks off of WMU pitcher Becca Shemberger.  But the Crusaders left 15 runners on base in just six plate appearances to keep the game within reach for the Broncos.

Valpo would score the first run of the game in the second, as sophomore Amanda Wisniewski (Lake in the Hills, Ill./Huntley) drew a two-out walk and promptly scored on a double to the wall by senior Sara Strickland (Scottsdale, Ariz./Horizon).  But the Crusaders left the bases loaded in both the first and third innings, the latter coming after the Broncos had tied the game in the top of the third on an RBI double by Jennifer Tschetter.

Western Michigan then claimed a 2-1 lead in its half of the fourth inning.  Diana Patterson doubled with one out and moved up to third on a passed ball, which would allow her to score on a sacrifice fly by Courtney Rousseau.   Meanwhile, the Crusaders put two in scoring position with two outs in its half of the fourth, but again could not push a run across the plate.

Finally in the bottom of the fifth, Valpo broke through again, scoring the tying run.  Senior Joylyn Ichiyama-Drewry (Torrance, Calif./Redondo Union) lined a leadoff double that landed just fair down the right-field line, and Phalen followed by blooping a single into center to advance Ichiyama-Drewry to third with nobody out.  After Phalen stole second uncontested, freshman Lindsey Norway (Chicago, Ill./Chicago Christian) hit a slow roller back towards the circle which was fielded by Shemberger for an infield single, as the WMU pitcher eschewed what would have been a close play at first to make sure the other runners wouldn’t advance.

Back-to-back strikeouts followed however, as the Crusaders looked destined yet again to load the bases but be unable to push across a run.  But Doerffler stepped up and had to do nothing but watch four straight pitches come across outside the strike zone, drawing a two-out bases-loaded walk to force Ichiyama-Drewry home with the game-tying run.  A groundout would end the Crusader threat however, leaving the game tied at two.

After a 1-2-3 top of the sixth, the Crusaders would again use the bottom of the sixth to break the tie.  Senior Jordan Rutkowski (Alden, N.Y./Alden) drew a one-out walk and was then running all the way on a fly to shallow left-center by Ichiyama-Drewry, reaching third as the diving effort by the WMU left fielder came up just short.  With runners on the corners and one out, Ichiyama-Drewry literally walked into second with a steal as the defense was concerned about holding Rutkowski at third.  Phalen would then pick up the game-winning RBI, blooping a single into shallow right-center over the drawn-in infield to break the tie and put Valpo ahead 3-2.

The Broncos would have one more scoring opportunity, however.  With one out in the top of the seventh, Gracie Barstad lined a single into right-center, prompting Stevens to go to the bullpen and call on senior Shaleigh Jansen (Ottawa, Ill./Ottawa Township) in relief.  Jansen struck out the first batter she faced, but an infield single when Doerffler lost her footing attempting to field a grounder advanced pinch-runner Bri Russell all the way to third base with two away as the potential tying run.  Tschetter hit a sharp liner with runners on the corners and two out, but a leaping snag by Marinec at second base ended the game and completed the doubleheader sweep.

“I actually thought in game two that we did a much better job of attacking strikes,” said Stevens.  “We got to more like what our approach typically is, which was good to see.  We work to pride ourselves on pitchers having to throw the ball in the strike zone.”

McGee earned the win for Valpo, giving up just one earned run on six hits and no walks in 6.1 innings of work to move to 13-5 on the season.  Jansen picked up her third save by registering the final two outs.  Shemberger took the complete-game loss for Western Michigan (23-23) to fall to 6-10 on the year.  Phalen led Valpo with three hits in the nightcap, while Duncan, Ichiyama-Drewry and Strickland all tallied a pair of base knocks.  Duncan actually reached in all four of her plate appearances, drawing a pair of walks as well, while Rutkowski walked in both her plate appearances.

“The whole pitching staff threw well today,” said Stevens.  “It was another good game for Alex.  I thought Sam had a good game as well to help bounce back after this past weekend, and then Shaleigh came in late and did what she does to close out game two.”

Valparaiso (34-16) closes out the regular season with a three-game Horizon League series this weekend at Cleveland State, needing just one win for the outright league regular season title.  The series begins with a single game on Friday at 4 p.m. CDT, with live video, stats and chat all available through www.valpoathletics.com.