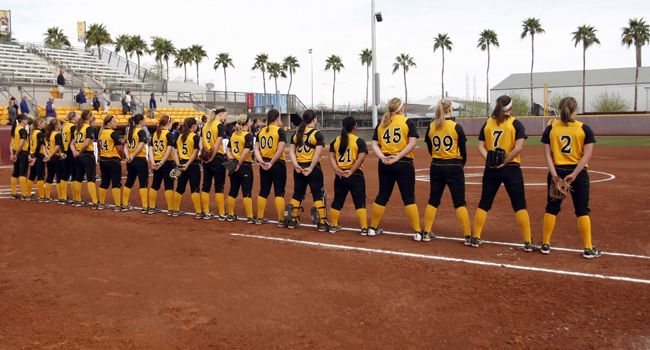 The Crusaders will host the 2012 Horizon League Championship this week. (Rick Scuteri)
Butler at Valparaiso | May 10, 2012
Related Links
Related Links

Next Up in Crusader Softball: For the first time in program history, the Valparaiso softball team will host the Horizon League Championship on campus beginning on Wednesday morning, May 9.  The Crusaders, who earned hosting rights by capturing the outright league regular season title, will play their first game on Thursday morning, May 10 at 11 a.m. against the winner of fourth-seeded Youngstown State and fifth-seeded Butler.

Previously: Valpo closed the regular season on a six-game winning streak thanks to winning all five games in its final week of play.  The Crusaders opened the week by sweeping a home doubleheader from Western Michigan by scores of 2-0 and 3-2.  Valpo then traveled to Cleveland State to close out Horizon League play, winning a single game on Friday (7-0) before setting a new single-season school record for wins on Saturday in the doubleheader sweep, 6-4 and 13-1 (6 innings).

Following the Crusaders: Every single game of the 2012 Horizon League Championship will have a live video stream through the Horizon League Network, as well as live stats.  Links for the live video and stats for Valpo’s games will be available at www.valpoathletics.com.

Head Coach Jordan Stevens: Jordan Stevens is in his second season at the helm of the Valparaiso University softball program in 2012 after leading the Crusaders to a successful season in his first year in charge in 2011.  Stevens, who now owns a record of 71-37-1 at the helm of the Crusaders, guided Valpo to 34 victories in his debut campaign, just one win shy of the program's single-season record, and then led the Crusaders to a record-setting 37 wins already this year.  He has also led Valpo to second and first place finishes in Horizon League play in his first two years.

Regular Season Champions: Valpo’s win over Cleveland State on Friday guaranteed the Crusaders the outright Horizon League regular season championship, a crown they earned by 3.5 games in the end.  The title marks the first league title of any sort in program history.  This also is the third time in Valpo’s five seasons as a Horizon League member that its finished within the top two, as the Crusaders previously finished in second place in 2008 and 2011.

Crusaders Outpace Preseason Pick: For the third consecutive year, Valparaiso finished higher in the standings than where it was projected by the league’s coaches in the preseason.  The Crusaders had been selected fourth in this year’s preseason poll before earning the regular season title.

Most Wins Ever: While earning the outright regular season title was the main goal for the Crusaders last week, they also reached another significant milestone.  Valpo’s five wins last week gave the team 37 on the season, surpassing the previous program record of 35 set in 2010.  The Crusaders now have four 30+ win seasons in program history, all of which have come within the last five years.

More Records: This year’s Crusader squad has enjoyed the most outstanding offensive season in program history and has re-written the program’s record book.  As a team, Valpo has already broken single-season records for hits, runs, RBIs, total bases, doubles, home runs and walks and is on pace to set new records in on-base percentage, slugging percentage and fielding percentage.  Meanwhile individually, Jordan Rutkowski already owns single-season marks for slugging percentage, RBIs, total bases and home runs, while Kelsey Phalen set the single-season putouts mark and Joylyn Ichiyama-Drewry broke the assists record.  A full updated record book is included at the end of this set of notes.

Historic League Start: While the Crusaders finally dropped a Horizon League game in the nightcap of a doubleheader at UIC, it halted one of the best starts ever in league play by a softball team.  Valpo won each of its first four league series by sweeping all three contests and then took the series opener against the Flames for a 13-0 start, the second-best start in league play ever by a Horizon League program.  Only the 1997 UIC squad, which went 14-0 in Horizon League action, won more consecutive games to start off the league season.

Double-Digit Winning Streak: The Crusaders’ loss to Notre Dame in non-league action on April 18 snapped just the second double-digit winning streak in program history.  Valpo carried an 11-game winning streak prior to the loss against the Fighting Irish, trailing just the 2011 squad, which won 13 straight at one point, for the longest winning streak all-time.  The Crusaders, who went nearly three full weeks between losses, won nine of their 11 during this winning streak within Horizon League play, as opposed to the record streak, in which just three of the 13 games were league contests.

Record Rally: Given that the first game of the Saturday doubleheader against YSU April 14 was a 4-3 decision, nobody could have seen coming what happened in the nightcap.  The Penguins torched Valpo for 11 first-inning runs and added another tally in the second to go up 12-0 through two frames.  But that only set the stage for the largest come-from-behind win in Crusader softball history and what is believed to be the largest comeback in NCAA Division I softball this season.  Valpo scored four in the third, three in the fourth and four in the fifth to cut the deficit to just one run before scoring one in the sixth to tie it and getting a walkoff single in the seventh for the 13-12 win.  The 12 runs also marks the most Valpo has ever surrendered in a victory.

Home Field Advantage: Getting to host the Horizon League Championship at the Valparaiso University Softball Field gives the Crusaders a chance to utilize their home field advantage in an effort to win the league tournament.  Following the doubleheader sweep of Western Michigan last Wednesday, the Crusaders are 13-4 at home this season.  Over the last three seasons, Valpo owns an impressive 35-8-1 record at home, including a 26-6 record in Horizon League play.

Winning by Run Rule: The Crusaders won their final game of the regular season against Cleveland State 13-1 in six innings, capped by a Lindsey Norway grand slam in the sixth, for their ninth victory via run rule this season.  Valpo still has yet to be on the wrong end of a shortened victory in 2012.  Last season, the Crusaders won eight games by run rule and lost three times.  Since joining the Horizon League, Valpo boasts a 22-3 record in league games shortened via run rule.

Duncan Earns Last Weekly Honor: Freshman designated player Brittany Duncan bookended the regular season with weekly honors from the Horizon League office, as she earned the league’s Player of the Week honor following the final week of the regular season.  Duncan went 9-for-14 (.643) at the plate for the Crusaders last week with nine RBIs.  The freshman also drew five walks, good for a .737 on-base percentage, and slugged 1.071 thanks to a pair of home runs.

League Honorees: Duncan’s honor for the final week of the season capped an impressive 2012 campaign on the weekly award front for Valpo.  The Crusaders ended the regular season having tallied eight Horizon League weekly award winners.  Senior Jordan Rutkowski earned a team-best three Player of the Week nods this season, while Duncan received the honor for the first and for the last week of play.  Redshirt sophomore Jessie Marinec, senior Sam McGee and senior Alex Lagesse each also captured one weekly honor from the league office.

A Look at the Honorees: Valpo boasts the Horizon League Newcomer of the Year, four First Team All-League honorees and one Second Team All-League recipient.   The Crusaders became the first program to have four players receive First Team recognition since joining the league in 2008.  Here’s a look at each of the Crusaders’ five postseason honorees:

Brittany Duncan - Duncan received Newcomer of the Year accolades and also earned a spot on the First Team and the All-Newcomer Team after a remarkable rookie season.  The freshman designated player hit .399 in the regular season with 12 doubles and nine home runs while driving in 50 runs, which surpassed Valpo’s previous single-season record and now ranks second in a single year in Crusader history.  She also walked 25 times, giving her an on-base percentage of .492.  Duncan especially stood out within Horizon League play, leading all league players with a .471 batting average and 31 RBIs.

Joylyn Ichiyama-Drewry - Ichiyama-Drewry earned her spot on the First Team after coming back from a redshirt season stronger than ever.  The senior third baseman hit .323 in the regular season with 42 RBIs, which is good for third in the league.  She picked up 23 extra-base hits on the year, including 13 doubles and seven home runs, giving her a slugging percentage of .572, which ranks fifth league-wide.  She also set a new school record and led the league in the field with 163 assists while manning the hot corner for the Crusaders.  Within Horizon League action, Ichiyama-Drewry led all league players with nine doubles and tallied 29 RBIs, good for second behind Duncan.  This marks Ichiyama-Drewry’s second league postseason honor, as she was a member of the league’s All-Newcomer Team in 2009.

Alex Lagesse - Lagesse received First Team honors after a regular season in which she cemented herself as one of the league’s top pitchers.  The senior registered a league-best 18 victories with a 2.07 ERA, which ranked second, and 140 strikeouts, good for fifth league-wide.  Within Horizon League play, Lagesse picked up 10 of her victories, tying for league-high honors, and earned a 2.05 ERA with 69 strikeouts.  Opponents this season hit just .223 against the right-hander, an average she lowered to .205 in league-only action.  This is Lagesse’s second postseason honor from the Horizon League, as she was tabbed a Second Team All-League honoree last season.

Jordan Rutkowski - Rutkowski repeats as a First Team All-League honoree after re-writing the Crusader record books this year.  The senior catcher broke Valpo’s single-season records for both home runs and RBIs just past the midway point of the 2012 campaign, and currently holds the season records in both with 13 home runs and 55 RBIs, the latter also a league-leading mark.  Rutkowski is hitting .411 on the season, good for second in the league and poised to become Valpo’s first .400 hitter since 1998.  She also ranks second in the league in slugging percentage (.775), runs scored (42), doubles (16) and total bases (117), as well as third in on-base percentage (.494) and hits (62).  For Rutkowski, it is her third career postseason Horizon League honor, as she was a Second Team selection in 2010 prior to her First Team nod last year.

Jessie Marinec - Marinec earned a spot on the All-League Second Team after bouncing back from a medical redshirt season last year.  The sophomore second baseman hit .361 in the regular season with nine doubles and seven homers while scoring 42 runs, which ties for team-high honors and ranks second in the league.  Marinec also ranked among the league’s top-ten in batting average (7th), slugging percentage (.568, 6th) and hits (56, t-8th).  For Marinec, it is her second postseason honor from the league office, as she was an All-Newcomer Team honoree in 2010.