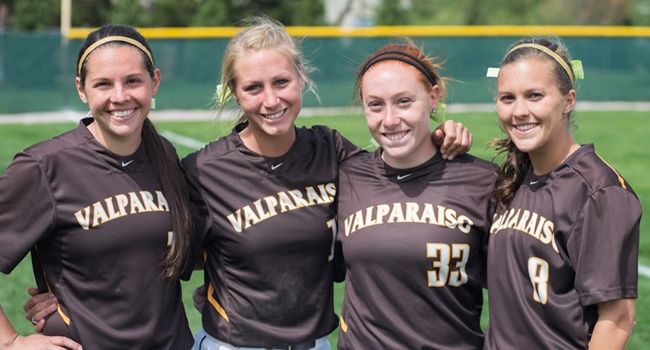 Following the longest game in the history of the Valparaiso University Softball Field, Valparaiso and Youngstown State played the second-longest game in the facility's history on Sunday afternoon, but this time, the result would not fall the Crusaders' way, as the Penguins won 3-2 in 11 innings.  Despite the loss in the regular-season finale, Valpo will be the third seed for this week's Horizon League Championship.

As the home finale, Sunday was also Senior Day for the Crusaders, as the program honored graduating seniors Amanda Bolton (Scottsdale, Ariz./Horizon [Arizona]), Hayley Bridwell (Lemont, Ill./Lemont), Tori Brown (Harrison, Ohio/Harrison) and Jennifer Hermanson (Beecher, Ill./Beecher) prior to the game.  The quartet stands as the winningest class in program history, having already won 140 games over their four seasons.  All four saw action on Sunday, with Bolton starting in the circle, Brown and Hermanson in the starting lineup and Bridwell making a pinch-running appearance in the seventh.

Facing Penguins pitcher Casey Crozier, who they had tagged for 15 hits and 10 walks in Saturday's 14-inning affair, the Crusaders struggled offensively early on the Sunday, picking up just one hit through the first five innings.  YSU had a chance to put the first run on the board in the third, but junior Kimberlin Wallace (Newton, Ill./Community [Lake Land C.C.]) gunned down Caroline Krombach at the plate attempting to score from second on a single.  The Penguins then claimed a 1-0 lead in the fourth on a two-out RBI single from Krombach which landed just out of the reach of a lunging Brown.

Valpo pushed across a pair of runs in the bottom of the sixth to claim the lead.  Freshman Kaitlyn Ranieri (Schererville, Ind./Lake Central) reached base for the sixth straight time, leading off the inning with a double off the top of the center field wall.  Wallace then laid down a sacrifice bunt attempt, but the YSU third baseman's throw was errant, allowing Ranieri to come all the way around to tie the game.  Wallace moved up to second on the error and scored immediately as fifth-year senior Joylyn Ichiyama (Torrance, Calif./Redondo Union) dropped a single into shallow right-center field.

YSU would force extra innings in the seventh, however.  A leadoff single and an error on a sacrifice attempt put two on with none out, but the Crusaders found themselves one out away from the victory when junior Angie Doerffler (Fort Wayne, Ind./Concordia Lutheran) turned two herself on a line drive, tagging out the lead runner to leave just a runner on first with two outs.  Courtney Ewing extended the game with a double to the fence in left, bringing Shayla DeCapita in with the tying run.  Valpo got a runner into scoring position with two outs in the seventh, but extra innings were in the cards.

The Crusaders had golden opportunities to score in both the eighth and ninth innings, but were unable to push across a run either time.  Valpo had second and third with nobody out in the eighth following a single by Ichiyama and a double from redshirt junior Jessie Marinec (Alsip, Ill./Marist), but a fly ball to shallow center resulted in the first out and wasn't deep enough to allow Ichiyama to tag up.

The fifth-year senior was then caught in a rundown and eventually tagged out on an infield grounder, and despite a hit batsman loading the bases with two away, a pop out ended the threat.  An infield single and a pair of walks loaded the bases with two out in the ninth , but another pop-up sent the game into the tenth.

Valpo reliever Sierra Pico (North Las Vegas, Nev./Legacy) pitched around a leadoff double in the top of the tenth, but the Crusaders went down in order in their half of the frame.  With the scoreboard wiped clean for the second straight game, Kelly Stowe led off the YSU 11th with an infield single, moving up to second two batters later thanks to a stolen base.  Pico looked to pick up the second out on a strikeout, but strike three was in the dirt, allowing the batter to release and Stowe to move over to third, where she would come home on a sacrifice fly by Haley Knight.  Ranieri singled with one out in the bottom half of the inning to put the potential tying run aboard, but would not advance past first base.

Pico took the loss for Valpo, falling to 9-9 despite allowing just two hits in her four innings of work.  Bolton took a no-decision in a solid start, scattering seven hits in seven innings of work.  Crozier earned the complete-game win for Youngstown State (16-25, 9-12 Horizon), improving to 12-9.  Ranieri went 3-for-3 and also drew three walks to lead the Crusader offense and has now reached base in nine straight plate appearances.  Ichiyama picked up a pair of hits, while sophomore Tarah McShane (Streamwood, Ill./St. Edward Central Catholic) reached base three times via a hit and two walks as well.

Valparaiso (29-24, 11-9 Horizon) secured the third seed for the 2013 Horizon League Championship thanks to Cleveland State's loss to UIC, which secured hosting rights with its win, on Sunday.  The Crusaders will travel to Chicago for the tournament, beginning action on Wednesday with a first-round game against sixth-seeded Youngstown State at 1:30 p.m.  Valpo is looking for its second straight Horizon League tournament title.