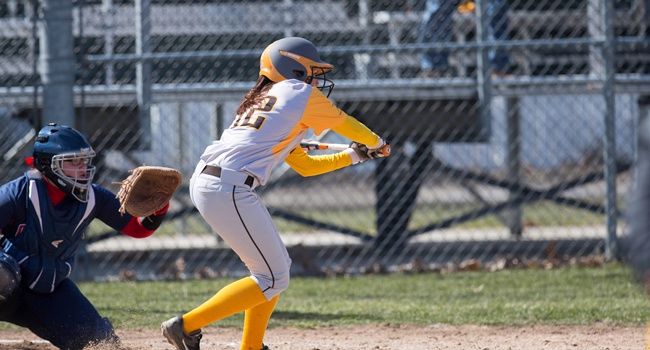 The Valparaiso softball team made it a complete series shutout of Detroit in Horizon League play on Sunday, delivering the Titans a third straight blanking in an 8-0, run-rule victory at the Valparaiso University Softball Field to improve to 5-2 in league action.

Perhaps most impressively, Sunday’s third consecutive shutout came from a third different pitcher, as Mollie Lindeman (Hebron, Ind./Hebron [PNC]) took the ball in the circle for the Crusaders in the series finale.  Lindeman had to work around trouble in each inning, facing a runner on third with two outs in the first and two Titans on with two away in the second.

A standout scoring chance for Detroit was erased by stellar defense from the Crusaders in the third, as with a runner on third and nobody out, Lindeman came out of the circle to field a Titan bunt and fired over to first for the force.  On the throw over, Detroit’s Kat Hoffman broke for home, but Tarah McShane (Streamwood, Ill./St. Edward Central Catholic) gunned a throw home following the force at first to allow Janelle Bouchard (Kennebunk, Maine/Kennebunk) to apply the tag and keep the Titans off the board.

Detroit would load the bases in the fourth on a pair of singles and a walk with one out, but Lindeman induced a shallow flyout – which forced the runners to hold – and followed with a strikeout to post another zero.  A one-out single went for naught for the Titans in the fifth as Lindeman completed the shutout to improve to 2-5 on the season.

“We had a pretty good team effort today,” said Crusader head coach Jordan Stevens.  “I was happy to see Mollie throw a very economical game.  She was able to weave in and out of some jams, and our defense came up with some big plays behind her to complement her effort.  It was a good all-around effort in all three parts of the game today.”

Offensively, all Valpo would need came in the bottom of the second inning as the Crusaders sent 11 hitters to the plate, scoring six runs.  Two singles and a walk loaded the bases with nobody out, and McShane slid home ahead of the throw home on a grounder by Sam Stewart (Frankfort, Ill./Lincoln-Way East) to get the scoring started.  Angie Doerffler (Fort Wayne, Ind./Concordia Lutheran) followed with a first-pitch single to score two more runs, with Stewart also scoring to make it 4-0 as the throw home bounced away.

Two batters later, Kaitlyn Ranieri (Schererville, Ind./Lake Central) sent a sharp grounder to the left side and reached safely with a single with nobody coming first, a base hit which plated Doerffler to push the lead to five runs.  Jorgi Calombaris (Frankfort, Ill./Lincoln-Way East) capped the six-run frame with a single inside the left-field line, more than enough to allow Taylor Lawson (Tucson, Ariz./Sahuaro) to score from second.  Ranieri added a two-run triple down the first-base line in the bottom of the third, bringing home Doerffler and Lawson to cap the scoring.

Lauren Weldy, who shut out the Crusaders in four innings of relief work over two appearances on Saturday, took the loss in the start for Detroit (3-24, 0-3 Horizon), surrendering six runs as she pitched into the second inning.  Ranieri continued her stellar start to league play by going 2-for-3 with three RBIs, while for the second straight game, both Lawson and Doerffler went 2-for-2 with a pair of runs scored, the latter driving in two runs as well.

“I was really pleased with the way we adjusted to Weldy today,” said Stevens.  “I thought we took some good swings in the second inning, and I felt it was big to get after a pitcher who had handled us yesterday.”

Valparaiso (11-23, 5-2 Horizon) steps out of league play Tuesday afternoon for a home doubleheader at the Valparaiso University Softball Field against Northern Illinois.  First pitch of the twinbill is scheduled for 2 p.m., with a live audio broadcast available on WVUR, 95.1 FM, Valparaiso.  Links for the live audio, as well as live stats, will be available at ValpoAthletics.com.