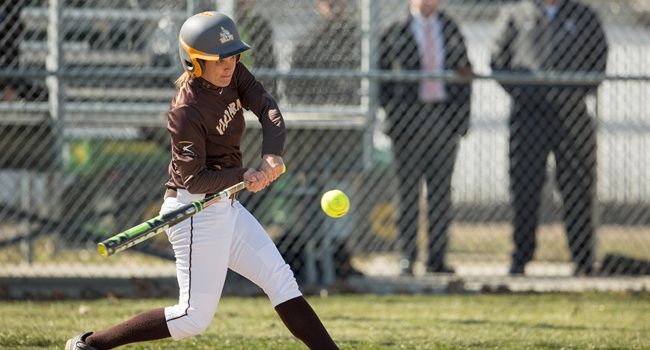 Next Up in Crusader Softball: Owners of five straight victories, the Valparaiso softball team continues its long homestand this weekend with a key Horizon League series against Cleveland State. The Crusaders enter the weekend in second place in the league standings.

Head Coach Jordan Stevens: In his fourth season at the helm of the Valparaiso softball program, Jordan Stevens has led the Crusaders to new heights through his first three years, as Valpo has captured the Horizon League Championship each of the last two seasons and earned the program’s first-ever NCAA Tournament win last year. Stevens enters this weekend with a 124-90-1 record at the helm of the Crusaders.

Series Notes: Cleveland State owns a slight 16-13 advantage in the all-time series over Valpo, but the Crusaders are 8-1 against the Vikings since Stevens took over as head coach. Last season, the two squads split a doubleheader in Cleveland before Valpo earned a 4-3 victory in eight innings to knock CSU out of the Horizon League Championship.

A Challenging Schedule: The Crusaders’ 2014 schedule has prepared the team well for Horizon League play, featuring at least ten games against NCAA Tournament teams from a season ago. Valpo has already taken on three teams ranked nationally as well. The Crusaders lost a narrow-one run game to #20/20 Louisiana early in the season, and faced #10/9 Arizona in the first weekend of their spring break trip. Valpo took on #2/4 Oregon out in Hawaii, and a matchup against #25/23 Notre Dame awaits later this spring.

Home Field Advantage: Valpo has started off the home slate strong, going 6-2 over its first eight home games. The Crusaders have been above the .500 mark at home in each of the last four seasons and are now 54-18-1 (.747) at the Valparaiso University Softball Field since the start of the 2010 saeson. Valpo has also been remarkably consistent during league play at home in that stretch, winning eight or nine games each of the last four years and posting a 37-10 (.787) record in home league games since 2010.

Five Game Winning Streak: Valpo enters this weekend having won its last five games, sweeping a three-game league set from Detroit and taking two games against Northern Illinois. While it marks the Crusaders’ first five-game winning streak this season, stringing together wins is nothing new for Valpo under Stevens. The Crusaders have now won five or more straight games 11 times since the start of the 2011 season.

Look at League Play: The Crusaders ascended to second place in the league standings with a three-game sweep of Detroit last weekend. Valpo split the first two weekends against two of the upper division picks in the preseason poll (UIC - 2nd; YSU - 4th) - both on the road as well. In fact, Valpo’s league slate this year has the Crusaders going on the road to play the teams picked 2nd, 3rd, 4th and 6th in the preseason poll, while Valpo hosts the squads picked 5th and tied for 7th.

Leader Atop the Order: Sophomore Kaitlyn Ranieri leads the Crusaders in batting average (.339), runs scored (28) and walks (17) and ranks among the Horizon League’s best in a number of categories, but the All-League honoree from a season ago has stepped up her game to another level in league play. Through the first three league series, Ranieri is hitting an astounding .619 (13-of-21) with 12 RBIs and ten runs scored. She has five multi-hit games and five multi-RBI games through seven contests, and has hit four of her six home runs this year in Horizon League action.

Enjoying the Home Field: The Valpo offense has come alive since returning home, scoring 55 runs over the last seven games and hitting at a .327 clip in the friendly confines. Leading the way offensively at home so far has been sophomore Janelle Bouchard, who is hitting .500 (10-of-20) with five runs scored, eight RBIs and six walks - most recently hitting a walk-off homer in game two against Northern Illinois. Bouchard is one of three regulars hitting over .400 at home so far, joined by freshman Taylor Lawson (.455 [10-of-22], ten runs, four steals) and Ranieri (.429 [12-of-28], eight runs, ten RBIs, five extra-base hits).

Back-to-Back-to-Back Blankings: The Crusader pitching staff and fielders kept Detroit off the board in the entirety of their three-game set last week, posting three straight shutouts behind three different starting pitchers (Weissenhofer, Pico, Lindeman). It marked the first time Valpo has shut out an opponent completely in league play since 2010, when the Crusaders blanked Green Bay in a pair of games. Valpo would actually go on to face the Phoenix twice in the league tournament that year as well and deliver two more shutouts.

Weissenhofer Rolls On: Sophomore Taylor Weissenhofer, since pitching three shutout innings vs. now top-ranked Oregon out in Hawaii, has been on a roll on the rubber. In her last 10 appearances, Weissenhofer is 7-0 with a 2.53 ERA - a mark which drops to 1.62 if you remove her opener vs. NIU - and 44 strikeouts in 38.2 innings of work. Within HL play, she is 3-0 with a 1.11 ERA in four appearances, including a two-hit, 10-strikeout shutout of Detroit.