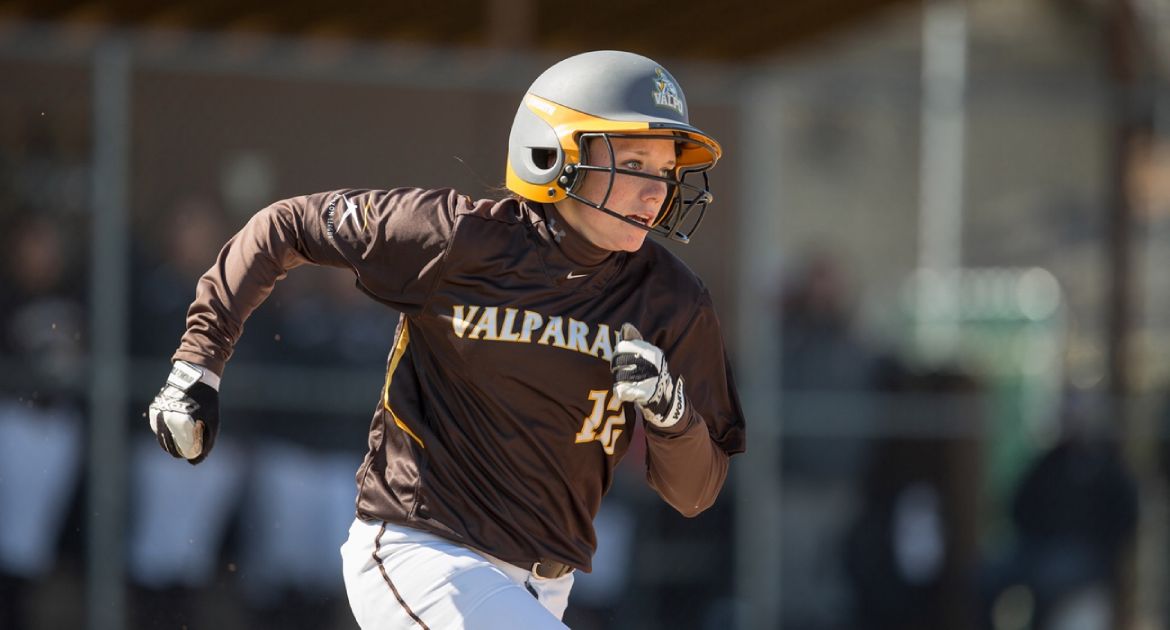 The Valparaiso softball team took the lead early in both ends of a doubleheader against Oakland in Horizon League action on Saturday at the Valparaiso University Softball Field, but the Golden Grizzlies would come from behind to send the Crusaders to a pair of losses, as Valpo fell 7-2 and 6-3.

Batting as the visiting team since the series was originally scheduled to be played at Oakland, Valpo took the lead in its first turn at-bat in Saturday’s opener.  Sophomore Taylor Lawson (Tucson, Ariz./Sahuaro) led off the game with an infield single to the 5-6 hole, and advanced station to station, eventually coming home when senior Tarah McShane (Streamwood, Ill./St. Edward) lined a single off the third baseman’s glove to give Valpo a 1-0 lead.

The Crusaders kept Oakland at bay through the first three innings, as starter Mollie Lindeman (Hebron, Ind./Hebron [PNC]) stranded eight Golden Grizzlies runners on base in the first three frames.   Oakland did break through on a Sara Cupp RBI single in the third to tie the game at 1-1, but with the bases loaded and one out, Lindeman induced a shallow flyout and an infield grounder to keep the opener level.

But Oakland would break through in the fourth inning.  Cupp sent a two-run double to the left-center gap to give the Golden Grizzlies the advantage and eventually scored on a single by TJ Bindus.  Courtnee Johnson followed with a two-run homer as Oakland scored five in the inning and led 6-1 through four innings.  Lawson scored her second run of the game on an RBI double from junior Kaitlyn Ranieri (Schererville, Ind./Lake Central) in the top of the fifth, but the Crusaders could get no closer than four runs and Oakland would cap the scoring with a solo homer from Johnson in the sixth.

Lindeman went the distance in the circle for Valpo, taking the loss to fall to 3-9 on the season.  Erin Kownacki earned the complete-game win for Oakland, improving to 9-7 as she earned her second win of the series.  Lawson went 2-for-4 with two runs scored to lead the Crusader offense, while Ranieri also reached base twice.

The nightcap looked to be going Valpo’s way early on, as the Crusaders struck in each of the first two innings.  Lawson walked to lead off the game and freshman Stephanie Moreno (Murrieta, Calif./Murrieta Valley) picked up a bunt single, with both stealing bases to put two in scoring position with nobody out.  A groundout by Ranieri plated Lawson, while Moreno eventually scored on a sacrifice fly from freshman Taylor Nadler (New Haven, Mo./St. Francis Borgia) to make it 2-0 Valpo.

Nadler kept the Golden Grizzlies off the board with a nice sno-cone grab of a line drive from Cupp with a runner on third in the bottom of the first.  Valpo added another tally to its side of the ledger in the second, with senior Lindsey Norway (Chicago, Ill./Chicago Christian) walking with one out and moving around the bases 60 feet at a time, scoring on a sacrifice fly by Lawson to make it a three-run lead.

Oakland would score its first run in the bottom of the third, an unearned tally, to cut the Valpo lead to 3-1, but that was the only run freshman Ashlyn Montgomery (Lebanon, Ind./Lebanon) allowed in the first four innings.  The fifth inning proved to be the Crusaders’ downfall, however.  Back-to-back singles led off the frame for Oakland, with one run eventually coming across on a wild pitch.  Then, with two outs, Cupp connected on a two-run homer to give her team its first lead of the game, 4-3.

Valpo looked to respond in the top of the sixth, with a leadoff single from Ranieri looking to ignite the offense.  But after moving up to third base on a pair of groundouts, a fly ball left the junior stranded at third base and the Crusaders trailing by one run.  The Golden Grizzlies then picked up two key insurance runs in the bottom of the sixth on a two-run homer by Lauren Mead, and the Crusaders went down in order in the seventh.

Montgomery tossed all six innings, falling to 5-4 as she took the loss, while Haley Zemmer earned the complete-game win for Oakland (15-15, 6-2 Horizon) to improve to 2-3 on the year.

Valparaiso (8-22, 2-6 Horizon) steps out of league play on Tuesday afternoon for a single game at home against IPFW.  The 3:30 p.m. first pitch will serve as the team’s Faculty and Staff Appreciation Day.  Links for live stats and audio will be available at ValpoAthletics.com.