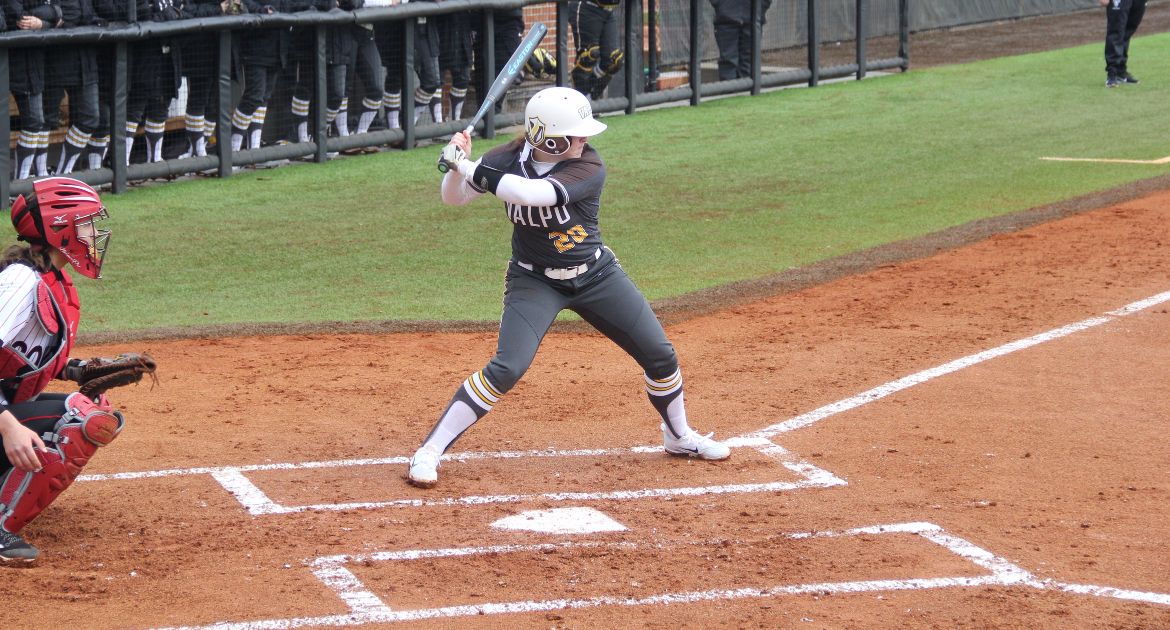 Next Up in Crusader Softball: The Valparaiso University softball team continues early-season tournament action this week as it heads to Charleston, S.C. for the Buccaneer Invitational. The Crusaders will face Eastern Kentucky and Charleston Southern twice apiece, as well as one matchup with North Carolina Central.

Previously: The Crusaders opened the season with a 2-2 record at the Troy Classic in Troy, Ala., defeating Tennessee State twice and falling to SIUE and Troy. Valpo’s tournament finale against SIUE was rained out. The weekend was highlighted by a one-hit shutout in the circle from sophomore Emily Richardson in Saturday’s win over Tennessee State.

Following the Crusaders: Live stats for all five games this weekend will be available via ValpoAthletics.com.

Head Coach Kate Stake: Kate Stake was hired as head coach of the Valparaiso softball program on July 23, 2014 and is in her fourth season as head coach, owning 64 victories. Stake led the Crusaders to the 2016 Horizon League Championship and a berth in the NCAA Tournament - the third in program history. Stake arrived at Valpo with eight seasons of assistant coaching experience at the Division I level, most recently serving as an assistant at mid-major power Hofstra.

Series Notes: Valpo will be taking on EKU for the first time in over two decades, as the only previous matchups in the series came in a 1997 doubleheader - one the Colonels swept, 3-1 and 6-0. The Crusaders are 3-0 all-time against Charleston Southern, most recently claiming two victories in the 2013 incarnation of the Buccaneer Invitational, 9-1 and 6-5. Valpo has never met North Carolina Central on the softball field.

Stellar Start: Sophomore pitcher Emily Richardson made just two starts in the circle last year as a rookie, but carried over her strong form from Horizon League play into her first start this year last Saturday against Tennessee State. Richardson tossed a six-inning shutout as the Crusaders run-ruled the Tigers, 9-0, and allowed just one hit - a sixth-inning double - in her bid to become the first Valpo pitcher to throw a no-hitter since 2013.

No-Hitters and Close Calls: With Richardson’s one-hitter on Saturday, former Crusader Amanda Bolton remains the last Valpo pitcher to throw a no-hitter, as she held Temple hitless in a five-inning win on March 15, 2013. Since then, the Crusaders have now had six one-hitters - all of which have come in the last three seasons. Four of those six no-hit bids were broken up within the last three outs of the game.

No Freshman Nerves: Freshman Addi Burke enjoyed a strong start to her Crusader career on opening weekend in Troy. After pinch-hitting in Valpo’s opener against SIUE, Burke started each of the weekend’s final three games at DP and posted the Crusaders’ top batting average, hitting .556 (5-for-9) with two walks and two RBIs. The five-hit opening weekend was the best by a Valpo freshman since Stephanie Moreno went 6-for-14 over five games in the first weekend of her career in 2015, while Burke was the first Crusader freshman with two multi-hit games on opening weekend since Sam Stewart did so in 2014.

Triple Threat: The triple is a rare offensive occurence in softball, with the Crusaders combining for 13 total triples over the last two complete seasons. That’s why the start to junior Carly Trepanier’s season at the plate was so unique, as she connected on triples in each of her first two at-bats in the season opener against SIUE. Trepanier became just the fourth Valpo player since the start of the 1999 season (the earliest single-game records are available) to pick up two triples in one game, and the first since Joylyn Ichiyama did so against UTSA on March 3, 2012.

Fielding Her Position: Senior pitcher Kenzie Grossmann had a strong weekend in the circle to open the 2018 season, allowing just one earned run in 11.1 innings of work while striking out nine batters and limiting opposing hitters to a .167 batting average. She earned the win in the Crusaders’ first game against Tennessee State, tossing a complete-game four-hitter, but it was her fielding work which was record-setting in that contest. Grossmann tallied seven assists in the circle, the most by a Valpo pitcher in a single game dating back to 1999. The senior followed the next day with five more assists in her start against Troy.

Debuts, a Return and a First: Burke was one of three Crusader newcomers to debut on opening weekend. Fellow freshman Brittany Anderson pinch-hit on opening day against SIUE and then started at first base later that day against Tennessee State, and junior pitcher Kelsie Packard debuted in relief versus SIUE and made another relief appearance the next day against Troy. Meanwhile, fifth-year senior Taylor Lawson returned to her starting spot in center field after suffering a season-ending injury last season in Valpo’s ninth game of the year, going 4-for-12 with three stolen bases, while sophomore Taylor Bowman picked up her first career hit in a pinch-hit appearance against Tennessee State on Saturday and went on to score her first career run.