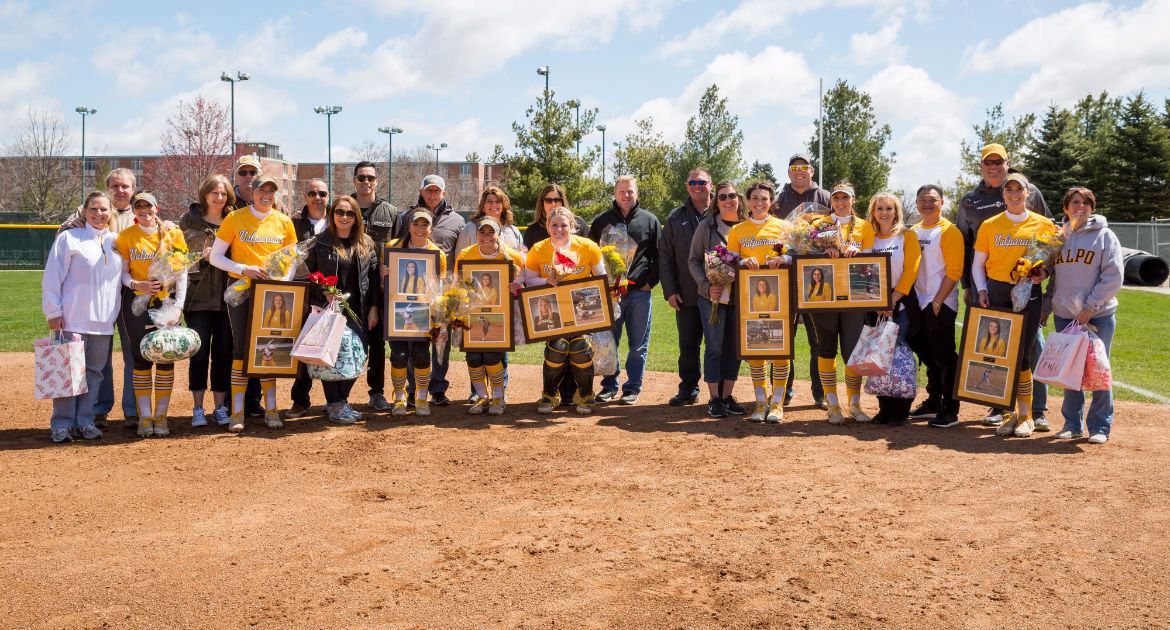 As has become the norm for the Valparaiso University softball team on Senior Day in recent years, the Crusaders came out after honoring their senior class prior to the games and swept a doubleheader from Bradley, walking off with a 2-1 win in game one and downing the Braves by a 4-1 final in game two.

“We've hit a good stride. and it started with a hard-fought loss against Evansville last Sunday. Even though we dropped it, we generated some good momentum leading into Loyola and continued to ride that wave against Bradley today. Our team has competed hard against some very good Valley competition all season; I'm happy some of these close games lately have broken our way.”

“Our pitching continues to give us a chance against everyone, our defense has settled into a good rhythm as of late, and our hitters have been doing a good job of playing to their strengths and, most importantly to their success, PLAYING instead of WORKING their at bats. Whether the game is tight or not, whether we are up or down on the scoreboard, it's evident they're out there having fun and playing loose. When they find that rhythm together, they are very good.”

“Most of these seniors came in the same year I did, and it has been a pleasure to be alongside them in their growth as softball players, as students, and as people. I'm proud of them for who they've become over the past four years. I'm happy for them; winning a conference tournament, receiving presidential academic honors, falling in love with a career path, forming life-long relationships. And above all, I am impressed by this group. Impressed by their contribution to this program. Impressed by their ownership of the brown and gold. Impressed by the job offers they have either received or already accepted, even prior to graduating. This is a group who found success on and off the field, but whose greater successes are out on the horizon after they receive that Valpo degree. These are bright, special people who are going to be such excellent alumni representatives of this program and our university. It's been an honor to coach them and spend so much time with them over their careers here, and I will miss them very, very much.”

Valpo (22-21, 9-12 MVC) looks to close out its first three-game sweep of a Missouri Valley Conference series on Sunday morning. First pitch of the series finale between the Crusaders and Bradley is slated for 11 a.m.