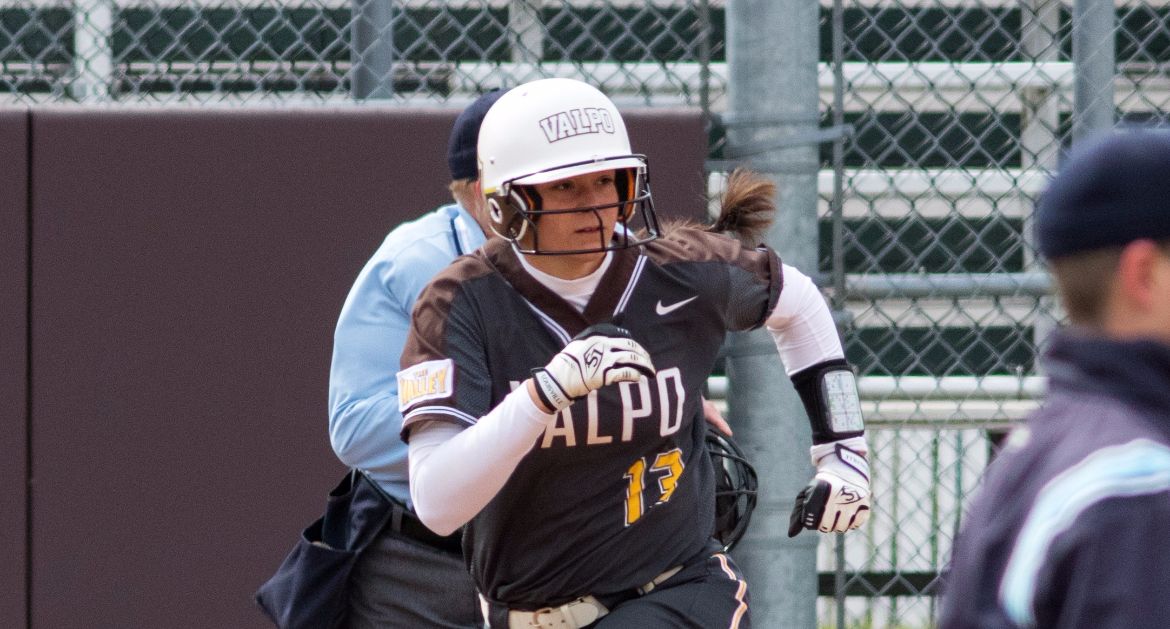 Brittany Anderson's solo homer accounted for the lone run of the game.
Bradley at Valparaiso | April 29, 2018

It was a simple formula which led to the Valparaiso University softball team completing a series sweep of Bradley Sunday at the Valpo Softball Complex, as freshman Brittany Anderson (East Chicago, Ind./Bishop Noll) connected on her first career home run to lead off the second and junior Kelsie Packard (Beloit, Wis./Turner [Rock Valley College]) made the run stand up with a complete-game shutout in the circle as the Crusaders claimed the 1-0 win.

“Pack was dealing today. It was a sharp, gutsy performance from start to finish - she laid it out there every pitch. She's a competitor; she loves to pitch; and everyone loves watching her pitch. There is not much more entertaining or rewarding than watching a kid doing something she really enjoys, really well. It fires everyone up, and that makes us better.”

“I felt like the whole series was a pitching highlight reel. I think [associate head coach] Monica [Wright] did arguably the best job against Bradley of any pitching coach this year - dissecting their swings and game-planning against a traditionally very potent offense (Bradley entered the weekend just outside the top-50 in the nation in scoring and averaging almost six runs/game in conference). Our pitching staff then executed that plan and their pitches about as well as I've seen them all season. Jenna's work behind the plate can't be overlooked either; all facets of our battery were impressive.”

“It was fun to see Brittany connect on that ball over the fence; she does it quite a lot in practice, and she's continued to be a consistent presence at the plate. It was only a matter of time for her to put one over and to get a game-winning hit on top of it makes it even more special. For a kid who spent all fall playing volleyball here at Valpo, she's been a quick study this spring in getting her offense going once we had the chance to work with her.”

“Carly came up big on that last play. We mishandled the ball on a routine play at first, but Carly didn't just assume the play would be made - she went in for the backup at full speed and that made the difference. That's the type of hustle play that wins games.”

“We didn't put a ton of runs up on the board this weekend, although I think we had a lot of good at-bats, plenty of chances, and a handful of tough-luck outs. But in the end, we got the hits that mattered and our defense took great care of the ball to hold off a Bradley comeback. Our team was a fun one to watch this weekend. They played some very good ball all weekend.”

Valpo (23-21, 10-12 MVC) steps out of conference play one final time on Wednesday as the Crusaders host Northern Illinois for a doubleheader. First pitch is scheduled for 2 p.m.