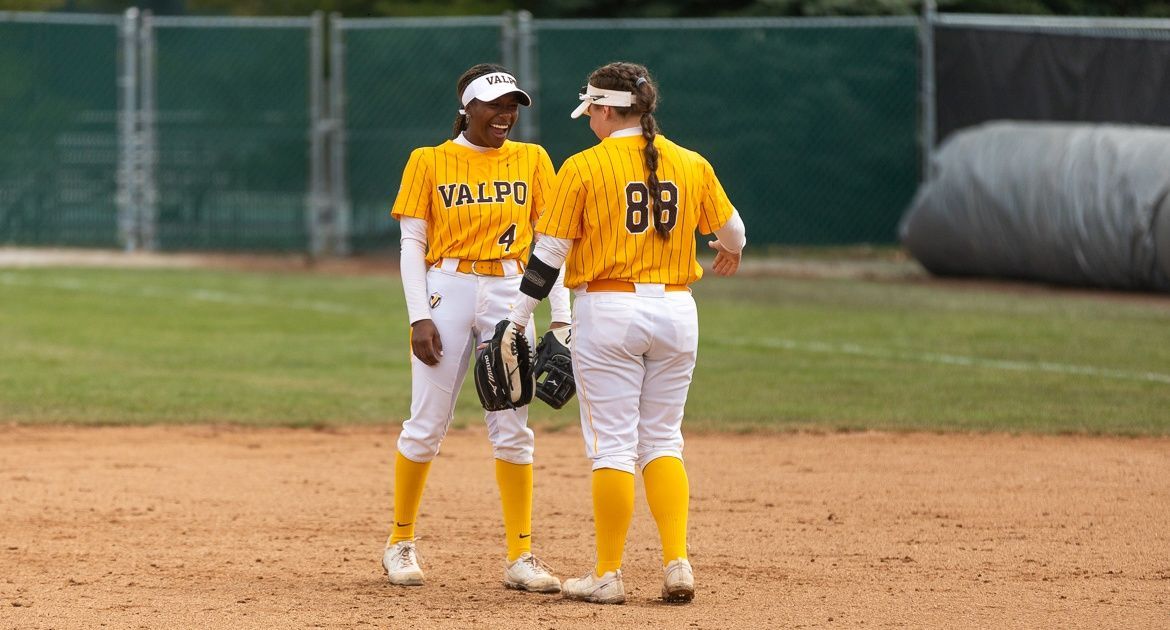 Next Up in Valpo Softball: The Valpo softball team continues a long homestand through the first three weeks of April with a three-game weekend series against visiting Southern Illinois. Due to projected cold on Saturday, the series has been moved to Sunday/Monday.

Previously: Valpo battled throughout its three-game home-opening series last weekend against Bradley before falling to the Braves by final scores of 4-2, 10-6 and 4-3. Lauren Kehlenbrink led the way for the Beacons, hitting a home run in all three games of the series.

Looking Ahead: Next week is slated to be a hectic one for the Beacons, as they are slated to host non-conference games against Purdue Fort Wayne (Tuesday) and Northern Illinois (Wednesday) before welcoming UNI to the Valpo Softball Complex for a three-game set Friday and Saturday.

Following Valpo Softball: Live stats for all three games this weekend will be available via ValpoAthletics.com.

Head Coach Amanda Eberhart: Amanda Eberhart was hired as head coach of the Valpo softball program in July of 2021. She brings seven years of head coaching experience at the Division I level, most recently spending the last three years as the head coach at Omaha and previously leading the IUPUI program for four seasons. Eberhart, who owns 140 career victories as a head coach, also has eight seasons of experience on staffs at Big Ten programs.

Series History: Valpo is just 1-8 all-time against Southern Illinois, with all but one of those meetings coming since Valpo joined the Valley. The lone win was part of SIU’s last visit to the Valpo Softball Complex, however, as Valpo won the opener of a doubleheader, 7-6, before the Salukis claimed the nightcap, 9-6, in the 2018 season.

Scouting the Opposition: The Salukis enter the Valpo Softball Complex with a 17-13 overall record on the year and are 6-5 in Valley play. SIU took two of three from Drake last weekend in its last MVC series, and most recently shut out Saint Louis in mid-week action, 5-0. Jenny Jansen has been one of the Valley’s top hitters, slashing .390/.486/.580 and leading the Salukis in most offensive categories, while Rylie Hamilton is hitting .376 and leads SIU with 23 runs scored. In the circle, Sarah Harness and Madi Eberle have covered all but 11 innings.

Homestand Continues: After 24 games over a span of 47 days in eight different locations, Valpo finally opened its home slate last weekend at the Valpo Softball Complex. The April 2 home opener matched last year for the latest home opener since the 2003 campaign. The Beacons are in the midst of a stretch in which they are slated to play 13 consecutive home games over nine dates in a 19-day stretch. Should Mother Nature cooperate to allow all the games to be played as scheduled, it would be the longest homestand by number of games since the 2014 team played 14 straight at home.

Going Yard: Junior Lauren Kehlenbrink entered the weekend series against Bradley with three home runs in the first 65 games of her career, and had not homered since April 11, 2021. She then proceeded to go deep in each of the three games against the Braves, doubling her career home run total. Kehlenbrink became the first Valpo player since 2012 to homer in three consecutive games - Jessie Marinec was the last Valpo player to accomplish the feat, going deep in back-to-back games against New Mexico State and then at Arizona State in March of that season. Kehlenbrink is just the fourth player in program history to hit a homer in three straight games.

Turning Two: The Beacons’ defense came up with three different ways to turn three double plays in the series finale against Bradley on Sunday - a traditional 6-3 groundball double play, an unassisted double play on a line drive to first, and a 2-3-6 double play on a sacrifice bunt where the runner attempted to take third. The three twin killings are tied for second-most in a single game in program history.

Crossing the Plate: Peyton Moeder and Taylor Herschbach each scored three runs over the course of last Sunday’s twinbill against Bradley. The pair of seniors rank 1-2 among Valpo players this year in runs scored, as Moeder has scored a team-best 15 runs on the season, while Herschbach has come around to score 13 times.

Steal, Steal, Steal: Moeder successfully stole a base in each of the three-game series against Bradley last weekend, becoming the second Beacon this year to steal a base in three straight games - Kayla Skapyak had previously done so as well. For Moeder, it was the third time in her career swiping a base in three consecutive games, and ironically, the second time she has done so over the course of a full series versus Bradley.

Running Around: Valpo continued its efficient season on the basepaths as it went 4-for-4 in stolen bases against the Braves last weekend. In fact, Moeder - who has a team-high seven steals on the year - is the only Beacon to be caught stealing this year, as the rest of the squad is a perfect 22-for-22 stealing bases. Jaina Westphal, with 30 career steals, is tied for seventh in program history in the category, while Moeder now has tallied 28 career steals, just one shy of the program’s top-10.

Slowing Down the Opposition: While Valpo has been super-efficient when it comes to stealing bases, it has turned the tables on the opposition when they attempt to run. The Beacons’ opponents this year are just 29-for-44 attempting to steal bases, compared to last year, when opponents were 66-for-80 on the basepaths. Valpo currently ranks third in the conference in caught stealing percentage as a team, and both catchers have contributed nearly equally, as Addi Weaver has thrown out eight runners and Lauren Kehlenbrink seven.

Delivering in the Clutch: To put it simply, when the Beacons picked up hits with runners in scoring position this year, they have won more often than not. So far this year, Valpo is hitting .352 with runners in scoring position in its wins, but just .196 in the same situations in its losses. There is a similar, but less pronounced, delineation for the Beacons’ pitching staff as well, as Valpo is allowing opponents to hit just .246 with RISP in wins versus .337 in losses.