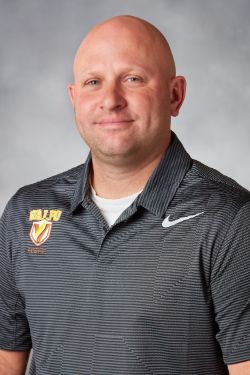 Jonathan Haas was hired as the head coach of the Crusader women’s golf program in December 2016.

After playing her senior season under Haas, Kim finished second in program history in career scoring average at 81.27. She was named to the all-Horizon League second-team, becoming the first Crusader since 2014 to achieve all-league honors.

In addition, Haas was at the helm as the Crusaders posted the best 54-hole tournament score in program history on April 2-3, 2017 at the Fort Wayne Classic, stroking a 941 as a team. That score was six strokes better than the previous program record.

In Haas’ second season in 2017-18, Valparaiso University made the leap to the prestigious Missouri Valley Conference after 10 years in the Horizon League. Valpo once again enjoyed one of the program’s best seasons, finishing with a team scoring average of 326.06, a mark that ranks fourth in program history. The team finished the season strong, setting season lows three straight rounds in the MVC Championship, culminating with a 315 in Round 3. Valpo finished with a 953 over the three rounds, a mark that ranks fifth in program history for 54-hole team score. That was Valpo’s second-best conference championship performance in program history and the best since a 950 in the Horizon League Championship that spanned April 26-28, 2013.

Several individuals excelled during Haas’ second year on campus, including Katie Willenbrink. The senior closed out her Crusader tenure with a career scoring average of 82.24 that ranks fifth in program history. Three players who are expected to return to the team enter the 2018-19 campaign with career scoring averages that stand among the program’s Top 10. Five of the Top 9 players to ever compete in women’s golf at Valpo in terms of career scoring average through the 2017-18 season have played under Haas.

“We’re excited to have an individual with the demonstrated success of Coach Haas joining the Valpo Athletics family,” Director of Athletics Mark LaBarbera said after hiring Haas. “His accomplishments with the golf programs at Crown Point High School and his connections to the Indiana golf community will be a great asset to our team. The enthusiasm he demonstrated in our conversations indicates he will be a great addition to our department.”

Haas came to Valpo with connections across the state stemming from his role as the All-State Chair for the Indiana High School Golf Coaches Association.

Haas, who is the third head coach in program history, works for Houghton Harcourt Mifflin as a Professional Learning Consultant. He graduated from Plymouth State College in Plymouth, N.H. in 2000 with a degree in childhood studies.