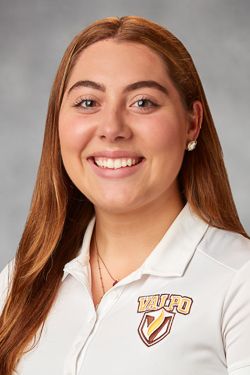 2018-19: Golfed in eight rounds over three events and finished with a season scoring average of 90.50… Had her season best round of 83 (+11) on Sept. 17 in the second round of the Loyola Fall Invitational.

2017-18: Played eight rounds over four events and averaged an 89.00 in her first season on campus… Made her collegiate debut with a +39 at the Loyola Fall Invitational Sept. 18-19… Had her season-low of 83 in the third round of that event hosted by the Ramblers.

Prep: Placed ninth in the 2016 Class A Nebraska State Finals after finishing 22nd the previous season... Was a four-year varsity letter winner and a three-time state qualifier as a team and individually... Co-district champion as a junior and placed in the Top 10 in a number of tournaments as a senior... Earned Marian's Team MVP Award as a senior... Received an award from NSAA and NCPA for Academic All-State her senior year.

Personal: Majoring in biology on the pre-med track... Was involved in worship choir and diversity club in high school... Writes her own blog and takes an interest in literacy and illiteracy across the world... Born on Sept. 9, 1999... Daughter of Wendy and Todd McMinn... Has two older siblings, Emily and Harrison.