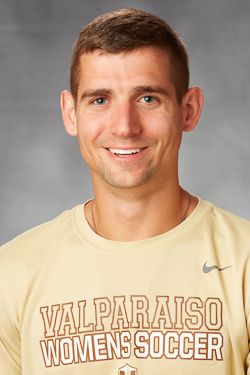 Former Wisconsin goalkeeper Jameson Kronser enters his second season as a graduate assistant on the Crusader coaching staff heading into the 2018 season.

Kronser helped guide Valpo in its transition to the Missouri Valley Conference in 2017, tutoring the goalkeeping corps. Valpo goalkeepers earned three MVC Defensive Player of the Week accolades in the program's first season in the conference.

Prior to arriving at Valpo, Kronser spent three seasons working as an assistant coach for the Beloit College men’s and women’s soccer programs and most recently spent the spring of 2017 serving as a volunteer assistant for both the men’s and women’s programs at Madison College. He also is the owner and director of the Kronser Keeper Academy, where he has tutored goalkeepers who have been invited to Youth National Team training camps, keepers who feature for ODP Regional and State teams and keepers who play at the regional and state club level.

Kronser was a member of the Wisconsin men’s soccer program from 2011 through 2013 as a walk-on goalkeeper. He helped the Badgers return to the NCAA Tournament in 2013 for the first time in 18 seasons. While with the Badgers, Kronser helped lead training sessions for non-travel roster players while the team was on the road and led goalkeeper training clinics as part of the UW soccer camps throughout the year.

Kronser has learned from and been tutored by some of the nation's top coaches. He played his collegiate soccer for John Trask, who was a two-time national champion while on staff at Indiana and spent five seasons coaching in MLS. He has worked for two years with the Madison 56ers as a volunteer assistant under Jim Launder, who captured an NCAA championship in 1995 as head coach at Wisconsin. He has also been coached by and works with nationally-renowned goalkeeping coach Stan Anderson, who runs Camp Shutout - the nation's largest goalkeeper-specific camp.

Kronser graduated from the University of Wisconsin-Madison in December of 2013 with a bachelor’s degree in biological systems engineering, and is pursuing his master’s degree in engineering management at Valpo. He currently holds his USSF National D License, as well as the NSCAA Goalkeeper Diplomas.