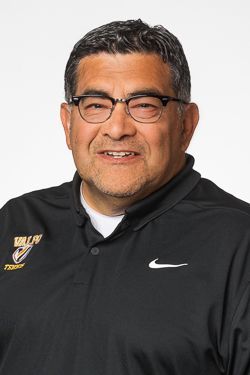 A lifetime of passion and commitment toward the sport of tennis became something bigger for Bob Modesto, who was named the head coach of Valpo’s women’s tennis program in July 2019. He completed his third year as a collegiate head coach in 2021-22.

In his third season in charge of Valpo tennis, Modesto helped the program post its highest win totals – both overall and in league play – since 2007. Furthermore, the team tied its highest overall win total since 2006. During a historic year for the program, Modesto instructed the program’s first league Player of the Year since 2001 (Olivia Czerwonka) and Valpo’s first Missouri Valley Conference Player of the Year in any sport since joining the league. In addition, Modesto coached the MVC Scholar-Athlete of the Year (Claire Czerwonka), the MVC Flight 1 Doubles champions (Claire and Olivia) and the MVC Flight 2 Singles champion (Olivia). He instructed one All-MVC First Team performer, one MVC All-Select Team recipient and a pair of MVC Scholar-Athlete First Team honorees. In addition, Modesto helped the program to its first league tournament victory since 2006 in addition to instructing the player who shattered the career program record for doubles victories and the duo that tied the program’s single-season doubles wins record. The team’s success extended into the classroom, as the program won the Valparaiso University Team Academic Award presented to the Valpo sport with the highest grade point average.

In his second season at the helm, Modesto guided Valpo to its highest win total since 2007. His squad compiled a four-match winning streak from Feb. 28 to March 13 with victories over Wayne State, Northern Illinois, Chicago State and Oakland. That marked Valpo’s longest winning streak since April 2007.

Modesto’s first conference match as a head coach was a memorable one as the team beat UNI 5-2 on April 2 in Cedar Falls for the program’s first league victory since joining the Missouri Valley Conference. That marked Valpo’s most lopsided conference triumph since topping Green Bay by that same score on April 9, 2016. The victory marked a stark turnaround from Valpo’s most recent matchup with the Panthers, a 6-1 setback on April 14, 2019. The Brown & Gold started the conference slate with a victory for the first time since the beginning of the 2006 Mid-Continent Conference schedule (W 7-0 over Centenary).

Under Modesto’s leadership, Valpo hauled in six Missouri Valley Conference weekly awards during the 2020-21 campaign. Olivia Czerwonka garnered MVC All-Select Team and MVC Scholar-Athlete First Team honors, while her older sister Claire was awarded the State Farm MVC Good Neighbor Award and MVC Scholar-Athlete Honorable Mention while also being featured in the MVC Scholar-Athlete spotlight. Claire and Olivia put together a nine-match winning streak at No. 1 doubles during the season en route to finishing the year with a doubles winning percentage of .667, tied for seventh best in program history and the best since 2004-05. Claire finished the 2020-21 season in the top 10 in the program record book in both singles wins (44, ninth) and doubles wins (52, third), while Olivia finished the year with a .585 career singles winning percentage that ranked sixth in the record book and a doubles winning percentage of .595 that ranked second.

Modesto’s team also thrived in the classroom in 2020-21. Valpo Tennis posted a 3.71 GPA during the Spring 2021 semester, the highest among all Valpo programs. The squad finished with a 3.72 GPA for the 2020-21 year (both semesters) with eight players earning a 3.0 or above for the spring semester and seven garnering a 3.5 or better.