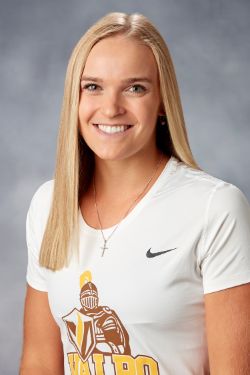 2017-18: Named to the MVC Scholar-Athlete First Team after posting a 4.0 GPA in health science… Nailed down seven singles wins and 13 doubles victories… Started the fall campaign by winning four of her first five matches… Teamed with Meg Modesto for a first-round doubles win over Evansville in the MVC Individual Championships on Oct. 7… Accounted for Valpo’s only victory on April 7 against MVC-leading Drake, teaming with Sysouvanh to prevail at third doubles… Won in both singles and doubles on April 15 at Saint Louis, accounting for Valpo’s only victories of that match… Finished the season on a high note, garnering three straight doubles wins including a victory that helped Valpo win the doubles point in a 4-1 loss to Stony Brook in the MVC Tournament.

2016-17: Picked up four singles wins and three doubles victories during her rookie campaign... Was victorious in her collegiate debut on Sept. 16, a 7-6 (11-9), 6-4 win over Evansville's Andjela Brguljan at the Greater Cincinnati Invitational... Defeated two Horizon League opponents at the Bronco Invitational, picking up victories over a pair of Green Bay players... Started regularly throughout the spring, seeing action at No. 4 and No. 5 singles... Notched her first career dual match victory on Feb. 24 with a three-set victory over IUPUI's Marina Schneiger in a 4-3 Valpo loss.

Prep: Rated a three-star recruit...was ranked fifth in the state of Minnesota and 13th in the Plains region...went 21-11 versus two-star recruits as a junior and played at No. 1 singles all four years at Eastview High School in Apple Valley...in the classroom, she possessed a 4.0 grade point average.