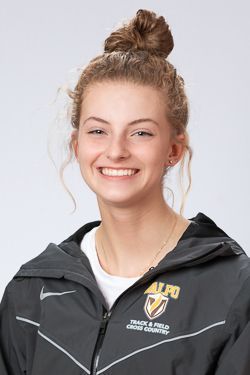 Prep (Athletics): Ran four seasons for the Lake Country Lutheran Lightning and was a four-time varsity letter winner… Was twice named team MVP, twice earned first team all-conference and helped her team qualify for the 2016 state championship… Two-time conference champion in cross country… Is her school’s freshman and sophomore recordholder... Ran track for three seasons for the Lightning and was a sectional qualifier and team MVP in each of those seasons… Was a first and second team all-conference medalist and two-time second team conference champion… Holds school records in the 1600 and 800 and was part of the record-setting 4x400 relay team.

Prep (Academics / Extra Curricular): Graduated as the valedictorian of her class… Was a three-time Student Council representative while also serving as a member of National Honor Society.

Personal: Both of her parents and grandparents are Valpo graduates… Pursuing a degree in psychology… Part of Christ College, the school’s honors college… Is a third-degree black belt in taekwondo… Enjoys playing the piano and learned from her father starting at age 5… Daughter of Philip and Rachel Roeglin… Has two siblings, Sarah and Maria… Hobbies include art, photographer and going to state parks… Has double-jointed elbows.