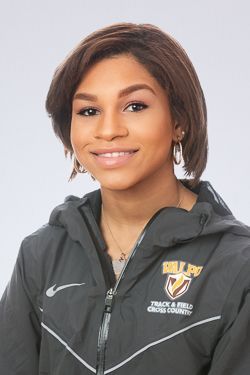 Prior to Valpo: Received 2018 Coaches Award and team MVP in both 2019 and 2020… Received the 12 seasons award for competing in a sport every season every year while in high school and the Varsity G award for receiving a varsity letter four or more consecutive years… Served as a track & field captain during her junior and senior years and a cross country captain as a senior… Competed in the girls 4x4 at New Balance Nationals Outdoor in 2019… Competed in the girls 4x4 in 2020 NYSPHAA Indoor Track & Field Championships… Competed in the girls 800 at USATF Junior Olympics in Sacramento, Calif. in 2019… Finished third at Dartmouth Relays in the girls 600…. Placed first in the 800 and second in the 400 at the AAU Northeastern Championships at Harvard… Placed third in the 600 at University at Albany State Qualifiers with a personal best of 1:39.

Personal: Majoring in Political Science...Hobbies include reading... Daughter of Donovan and Charisse… Has a brother, Aalim.