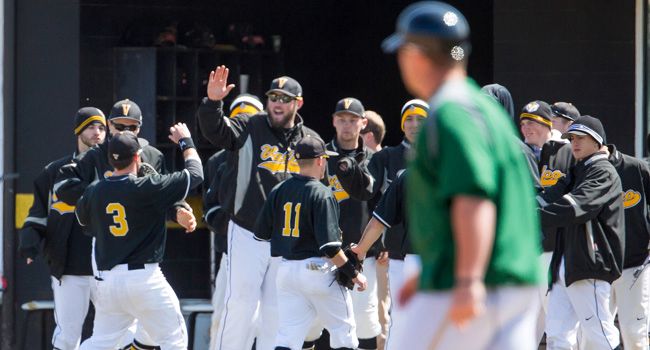 On Deck for Crusader Baseball: The Crusaders hit the road Friday as their final six games will be played in the state of Ohio. Wright State has already wrapped up the Horizon League regular season crown and, in effect, the #1 seed for the Conference Tournament. Valpo and Milwaukee are essentially in a deadlock for third place so plenty is at stake for the Brown and Gold these final two weekends.

Last Time Out: Jason Hager flustered Valpo for seven innings last Friday until the Crusader offense awoke from its slumber to rattle off three runs in the eighth to bring it to 4-3. Valpo scored one in the ninth and the winning run in the 11th to claim a 5-4 victory in the series opener. Despite throwing a complete game in Saturday’s tilt, Dalton Lundeen was on the wrong end of a 1-0 contest as the Grizz evened the series. The Brown and Gold flipped the script in Sunday’s series finale as they pumped out 14 hits in the rubber game. Ellis Foreman yielded just three earned runs in seven innings of work as Valpo doubled up Oakland 8-4.

On the Air: All three games this weekend will feature live stats. Sunday’s series finale will be broadcast on the Horizon League Network. All links to the live stats and video are available at valpoathletics.com.

Probable Starters: RHP Cole Webb (5-3, 4.52) will take the ball in the series opener for the Crusaders. LHP Dalton Lundeen (3-5, 2.10) will seek out some run support to boost his Pitcher of the Year campaign in Saturday’s tilt. RHP Ellis Foreman (2-6, 6.71) looks to build off last Sunday’s quality start vs. Oakland in the series finale.

Series Notes: Wright State leads the all-time series 23-13 over Valpo in a rivalry that started in 1992. The Crusaders are 6-12 all time on the road versus the Raiders. Both of Wright State’s losses in Horizon League play have come at the hands of the Brown and Gold. Cole Webb and Dalton Lundeen curbed WSU to one run in 14 innings in a doubleheader sweep over the Raiders in April.

Scouting the Opposition: Monsters of the Horizon League yet mediocre in non-conference play, Wright State has assembled an astounding 21-2 record in the former and an 8-16 mark in the latter. The Raiders are 16-4 overall at Nischwitz Stadium and a perfect 12-0 in league contests there. Travis Hissong, WSU’s Friday starter to open the season, hasn’t pitched since March 28th, but Joey Hoelzel has graduated into his spot and flourished.

A chiseled lineup, the Raiders are doubles machines offensively. Their 104 two-baggers rank eighth in all of Division I baseball while their 5.9 runs per game figure comes in at 58th. Infielder Michael Timm leads the Wright State bats with a .343 average, 37 runs, and 28 walks. The owner of a .949 OPS, Timm’s 19 extra-base hits are tied for the team lead with Andrew McCafferty. Sophomore Jason DeFevers has shoehorned his way into the lineup, having rewarded head coach Greg Lovelady with a .327 batting average, .405 on-base percentage, and 19 runs batted in. Catcher Sean Murphy lurks dangerously behind the plate for the Raiders. Murphy has thrown out 11 of 26 (42.3%) would-be base stealers in Horizon League play. At the plate, the freshman is just as lethal. He’s slashing .378/.481/.533 in 23 league games and is three RBIs (29) off the team pace.

Wright State’s pitching has amassed a 4.52 earned run average, led by a pair of seven-game winners in Hoelzel and Robby Sexton. Like Lundeen, Hoelzel is making his pitch for Horizon League Pitcher of the Year as his 85 1/3 innings thrown are more than nine ahead of UIC’s Tomas Michelson for most in the HL. Sexton, a left-hander, tossed a complete game in Wright State’s 2-0 loss to Valpo on April 5th. Darien Nunn, another southpaw, blanked the Crusaders for four innings last month before giving way to Taylor Braun who picked up the win in WSU’s lone victory over the Brown and Gold. At the back end of the pen is Andrew Elliott who possesses a 0.93 ERA and 12 saves (9th nationally).

In the Dugout: Greg Lovelady is in his first season as head coach of the Raiders. A Miami Hurricane during his college playing days, Lovelady served on Rob Cooper’s staff for nine seasons, including the last seven as associate head coach.

Et Cetera: Dalton Lundeen has received one run of offensive support total in his last three starts...In 23 Horizon League games, the Raiders have allowed just 19 stolen bases. In 24 non-conference contests, they’ve yielded 42...Five of the six starters in this series surrender fewer than one hit per inning...Michael Morman has raised his average from .252 to .301 in just nine games...In five career appearances spanning seven innings versus Wright State, Karch Kowalczyk has not allowed a run...Cole Webb and Lundeen are a combined 4-0 against WSU in their careers with a 2.00 ERA.